Marines of Co. A, 1/25 return from their first Mongolian horseback patrol during Khaan Quest &#39;03. (Courtesy of USMC)

Marines of Co. A, 1/25 return from their first Mongolian horseback patrol during Khaan Quest &#39;03. (Courtesy of USMC) 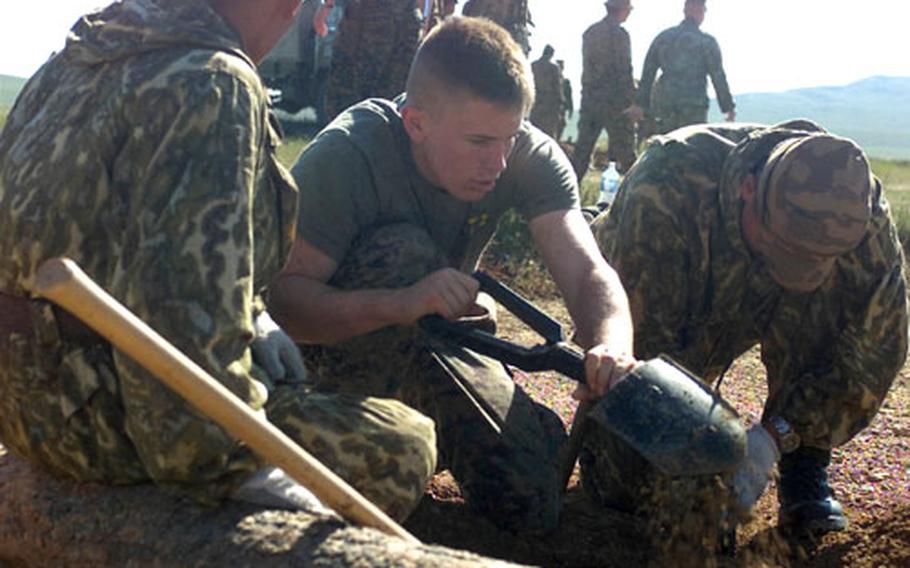 Lance Cpl. Frank L. Whitslar, combat engineer, 9th Engineer Support Battalion, digs next to a Mongolian service member as they prepare to build a log wall during the second phase of training of Khaan Quest &#39;03. (Courtesy of USMC) That&#8217;s the in-a-nutshell version of Khaan Quest &#8217;03, the Marines&#8217; three-phase exercise to train Mongolian Army troops to help keep the peace in Iraq next year.

Marines from Company A, 1st Battalion, 25th Marines and the 9th Engineer Support Battalion have kicked off the second phase of Khaan Quest &#8217;03. During this part, they&#8217;ll exchange peacekeeping tactics, techniques and procedures with the Mongolian troops.

Khaan Quest&#8217;s first phase focused on noncommissioned officer development. It &#8220;went extremely well,&#8221; Maj. John C. Osborne Jr., officer in charge of the exercise, said in a Marine Corps news release. &#8220;The Mongolian chief of training&#8221; and Mongolian unit physical training instructors &#8220;enjoyed themselves and got a lot out of participating in this exercise with us.&#8221;

The Mongolian unit taking part in the training will deploy to Iraq in February as part of the international peacekeeping force there. The Marines are using lectures and field time to prepare the Mongolians for the deployment.

Two days of classroom instruction &#8212; focusing on force protection, actions in defense, engineer capabilities and communications &#8212; began phase two, 1st Sgt. Scott M. Smith, the exercise&#8217;s operations chief, said in a Marine Corps release. &#8220;Then we are going to expound on that classroom instruction by going out to the field to get some hands-on experience.&#8221;

&#8220;It took me a few minutes to explain to the Mongolians what an obstacle is and how it works,&#8221; said Staff Sgt. Reynante R. Bautista, discussing how Marines create defensive parameters.

&#8220;To allow them to practice building all the obstacles and bunkers gives them more of an idea of what we are teaching them and how to employ it in combat,&#8221; Bautista, staff noncommissioned officer in charge of an engineer platoon, 9th Engineer Support Battalion, said in the release.

Marines also are getting some valuable training from their counterparts &#8212; including a technique that&#8217;s already proven valuable to U.S. forces in Afghanistan: patrolling on horseback.

Next on the Marines&#8217; to-do list: a mobility exercise to test the Mongolian troops in the different areas in which they&#8217;ve been trained during the exercise.