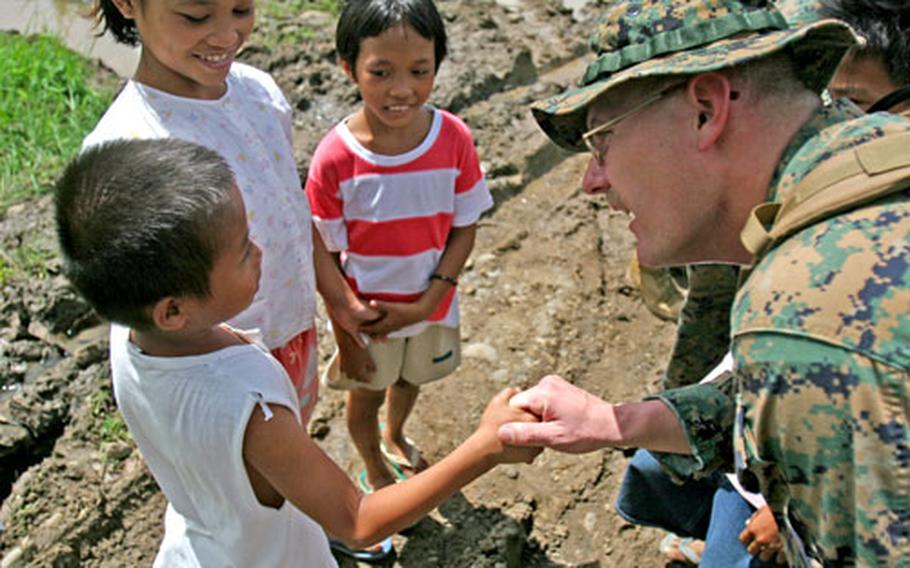 Gunnery Sgt. Craig J. Fried of 31st Marine Expeditionary Unit spends a few moments Sunday with children from the area around the devestated Philippine town of Guinsahugon. Guinsahugon was destroyed Feb. 17 by a mudslide from a nearby mountain. (Raymond D. Peterson / USMC)

Gunnery Sgt. Craig J. Fried of 31st Marine Expeditionary Unit spends a few moments Sunday with children from the area around the devestated Philippine town of Guinsahugon. Guinsahugon was destroyed Feb. 17 by a mudslide from a nearby mountain. (Raymond D. Peterson / USMC) 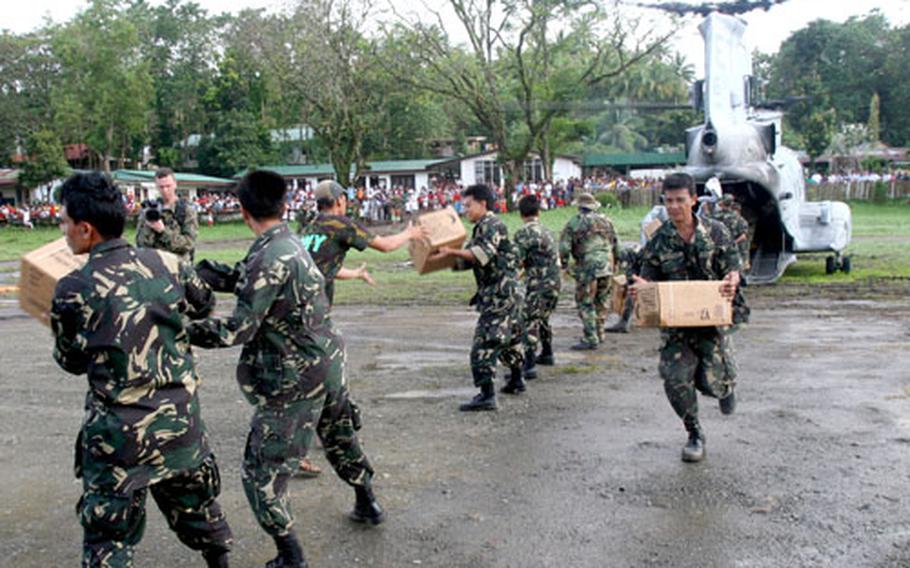 Members of the Philippine Army help U.S. Marines and sailors unload supplies from a CH-46E Sea Knight helicopter as part of the relief effort being conducted in the southern part of the island of Leyte. (Raymond D. Peterson / USMC)

CAMP FOSTER, Okinawa &#8212; U.S. troops are pushing themselves to the limits to dig for survivors of a massive mudslide in the Philippines.

Roughly 300 Marines from the Okinawa&#8211;based 31st Marine Expeditionary Unit are already at the site, joining in the frantic digging for anyone left alive in buildings covered by tons of mud and boulders that covered the village of Guinsaugon on Friday.

U.S. Pacific Command has authorized about 5,500 U.S. troops already in the region to assist in the relief operation. Yokota&#8217;s 36th Expeditionary Airlift Squadron has already transported more than 40 people and several tons of equipment, to be used in the relief efforts, according to an Air Force press release.

The 36th Contingency Response Group from Andersen Air Force Base, Guam, is also participating. The group, which consists of the 736th Security Forces Squadron and 36th Mission Readiness Squadron, deployed to Clark Air Base in early February to open the air base in preparation for the upcoming Balikatan exercise.

&#8220;It&#8217;s pretty much total devastation,&#8221; said Lt. Col. Chuck Metrolis, commander of the 31st Rescue Squadron, from Kadena Air Base, Okinawa. &#8220;Two of our guys went on an aerial survey of the landslide. The town was completely covered in mud 10 to 20 feet deep. It looked like layered icing on a cake.

&#8220;It was like half the mountainside just slid off and covered everything in a half-mile path to the river basin,&#8221; he said via cell phone as he rode in a bus to the disaster site Monday afternoon.

Metrolis said his pararescuemen are trained to give medical assistance in all kinds of environments.

The landslide followed two weeks of heavy showers, which drenched the area with 27 inches of rain.

Metrolis said his team of 18 pararescuemen, which includes a flight surgeon, flew into the former U.S. air base at Clark Field Saturday afternoon.

While the ships made their way to the area, Parmer said a survey team made up of medical personnel, engineers, communicators and aviation planners were already in the affected area near the town of Saint Bernard.

As of late Sunday, 10 generators, 10 sets of lights on tripods, 3,000 water cans, 500 four-quart kettles, and 2,000 blankets had been delivered, according to a release from the Combined Information Bureau, Philippines. Meals, Ready to Eat, bottled water, and shovels were also delivered, as well as a water purification system that is capable of processing up to 800 gallons of water per hour.