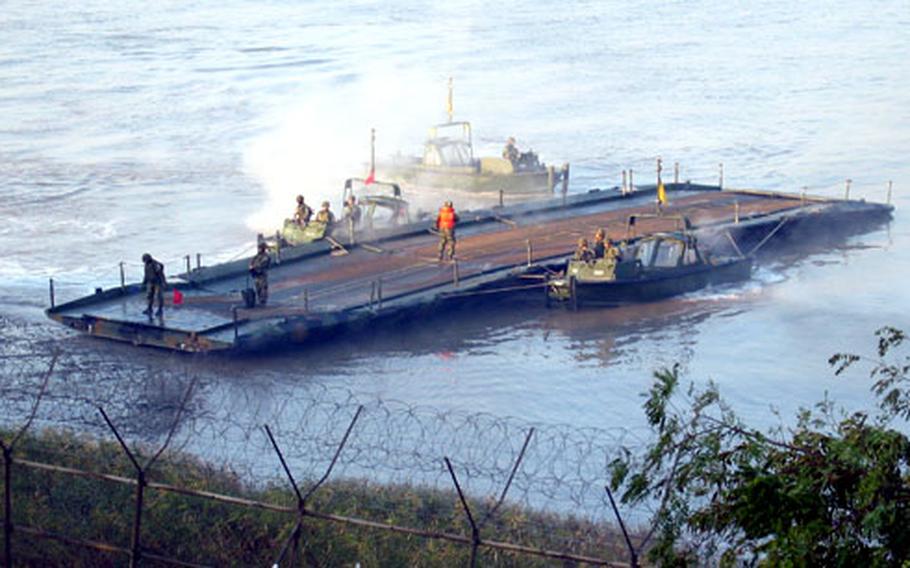 Boats position themselves next to a portable bridge as they prepare to receive a tank and ferry it across a South Korean river. The portable bridges offer the Marines a way to move heavy equipment to the battle quicker than building bridges. Marines and sailors from the 3rd Marine Expeditionary Force are in South Korea for a month of combat engineer training with South Korean marine and army units. (Courtesy of U.S. Marine Corps)

It was dark and chilly and a predawn fog hung over a mile-wide stretch of the Yom-ha River Friday as the Marine engineers took their places for the river assault.

For Marine Pfc. Stephen Green of Company A, 9th Engineer Support Battalion, the river crossing approximately 25 miles northwest of Seoul would be a new experience, something he and his fellow Marine combat engineers don&#8217;t get to practice at their home base on Okinawa.

Green and 450 Marines and sailors from the 3rd Marine Expeditionary Force are in Korea for a month of combat engineer training with South Korean Marine and Army units.

The leathernecks come to South Korea twice a year under the Korean Incremental Training Program, or KITP. Also with them are two elements of U.S. Navy sailors &#8212; one a Seabee construction detachment, the other a group that operates a battlefield surgical hospital. This season&#8217;s KITP is to end in early November.

South Korea has a big advantage for combat engineers like those in Green&#8217;s unit. It has many rivers and thus plenty of opportunities to learn how to get bridges across them, Marine officials said.

The Marines have no river on Okinawa.

The attack commenced at 6:30 a.m. when South Korean Marine underwater demolition teams started across in rubber boats. Once across, they simulated setting off plastic explosives to blow up the seawall.

The assault forces laid down a smoke screen; then came successive flights of helicopters airlifting troops to the far bank.

Behind them proceeded waves of amphibious assault vehicles &#8212; 35 in all &#8212; known as AAVs. Inside were Korean Marines.

With the AAVs across, it was time to get tanks onto the far shore to give armored support to the infantry.

That&#8217;s where Company A came in. Four tanks were on barge-like structures made from sections of Improved Ribbon Bridge, IRB. A tank drives up a ramp onto the platform, which has a boat at each of its sides.

&#8220;They will cross the river to the other end and dock on the beach, drop the load and then return to the other shore and then continue the cycle,&#8221; Bowen said.

The Marines rafted four South Korean tanks across. Green was one of the boat operators.

Among senior brass watching the morning&#8217;s river assault was the commandant of the South Korean Marine Corps.

The exercise, which ran about an hour, left Bowen&#8217;s engineers enthusiastic about a battle technique most hadn&#8217;t had a chance to practice outside of South Korea, Bowen said.

&#8220;I think there&#8217;s no way we could have jump-started motivation and interest in it with anything short of actually demonstrating in front of them what the capabilities are,&#8221; he said.