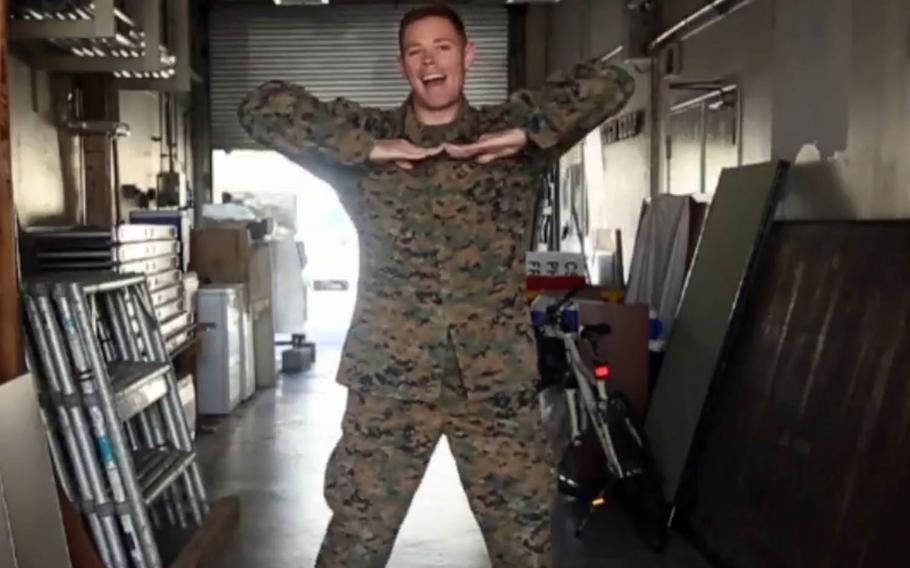 Some Marines on Okinawa recently released a video of themselves performing choreographed dance moves to "Koi," the closing theme song of a popular Japanese television show. (Screenshot from Twitter)

A group of Okinawa-based Marines is gaining praise on Twitter after releasing a video performing choreographed dance moves to “Koi,” the closing theme song of a popular Japanese television show.

The clip comes about a month after a similar video from the U.S. Embassy in Japan, led by then-Ambassador Caroline Kennedy, grabbed millions of views and positive comments.

The 35-second video, released last week on MCIPAC’s Japanese-language Twitter account, received more than 31,000 “likes” and over 23,000 retweets as of Tuesday evening in Japan.

One person wrote in Japanese, “So you think Japanese will be happy if you do the Koi dance. You are right!”

A frequent request asked the Marines to release a full version of the dance, and some urged the servicemembers to collaborate with Japan Self-Defense Forces personnel.

Another Japanese comment praised the Marines for their service: “Thank you for protecting Japan. I hope you will never leave Japan. People in Okinawa say they want you to leave but Japan won’t be safe if you were not here! If you leave, it may lead us to war. Thanks.”

But McArthur said they had another reason for filming the ‘Koi’ dance.

“A lot of people here celebrate the Lunar New Year and fly banners with fish on them to grant them a good catch through the year,” he said. “We performed the ‘Koi’ dance because koi is a homonym; it’s a fish, but it also means ‘love.’”