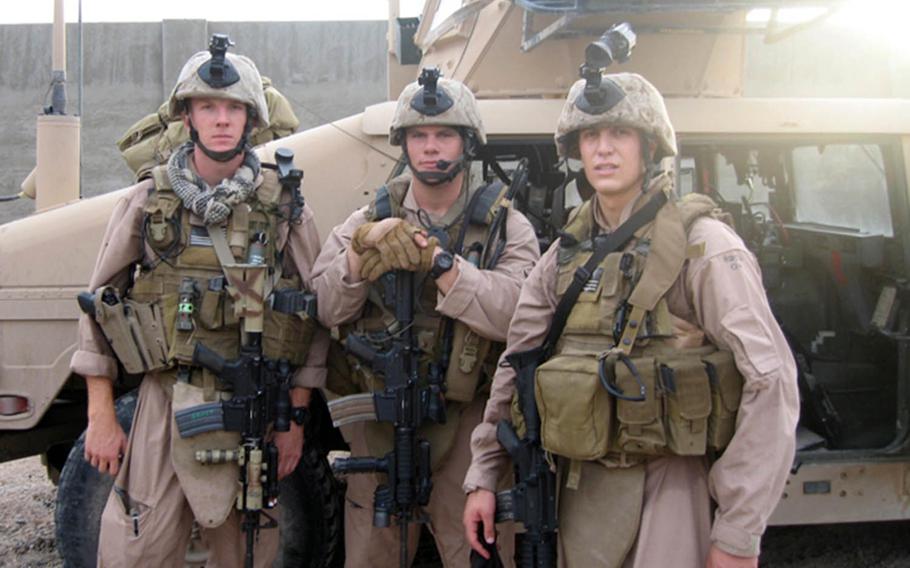 Marine 1st Lt. Nathan Krissoff, right, was killed by a roadside bomb near Fallujah, Iraq, Dec. 9, 2006. His death inspired his father to join the Navy medical corps at age 60 and deploy downrange as a combat surgeon. (Courtesy of the Krissoff family) 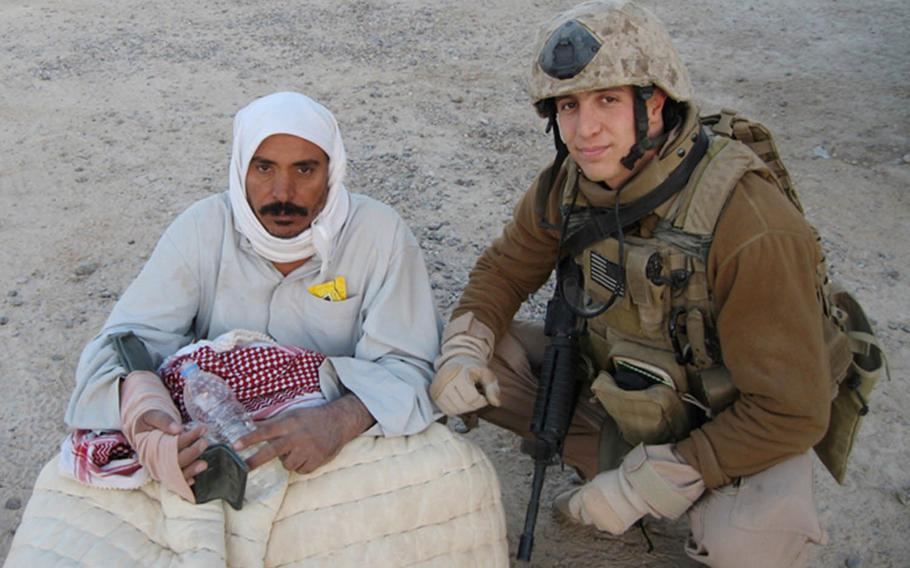 Marine 1st Lt. Nathan Krissoff, right, was deeply impacted by the Sept. 11, 2001, terrorist attacks and joined the Marines Corps as a counterintelligence specialist. (Courtesy of the Krissoff family)

CAMP FOSTER, Okinawa — Bill Krissoff is a serious man who quickly becomes warm and friendly in conversation. Refined, with a full head of gray hair, he looks as much like a grandfather as he does an accomplished orthopedic surgeon.

Yet beneath the unassuming facade, Krissoff and his family are perhaps one of the most heroic and selfless examples of service in the post-Sept. 11, 2001, war on terror.

After losing his son, Marine 1st Lt. Nathan Krissoff, in 2006 to a roadside bomb in Fallujah, Iraq, he joined the Navy medical corps after leveraging a meeting with President George W. Bush to obtain the needed age waiver. He later deployed to both Iraq and Afghanistan where he is credited with saving countless lives.

Krissoff is on Okinawa this week as an honored guest of Lt. Gen. Lawrence Nicholson, III Marine Expeditionary Force commander, who led the 5th Marine Regiment in Fallujah when Nathan Krissoff was killed.

Krissoff, who received an award dedicated to his son from the 3rd Reconnaissance Battalion, was also to attend Marine Corps birthday balls and speak to Marines and members of Okinawa’s military medical community about his experiences.

“Bill Krissoff is one of my heroes,” Nicholson said in a video tribute made by Steven Spielberg that aired at the 2014 Concert for Valor on the National Mall in Washington, D.C. “There’s no doubt in my mind that because of his presence [downrange], there are Marines alive today.”

‘He wanted to serve’

Krissoff’s story starts with Nathan, who was deeply impacted by the terrorist attacks of Sept. 11, 2001.

“Like many men and women of his generation, he wanted to serve,” he said. “He chose the challenge of the Marine Corps to fulfill that.”

Nathan entered officer candidate school in June 2003. Upon graduation, he was assigned to 3rd Intelligence Battalion in Okinawa, Japan, as a counterintelligence specialist. After exercises on mainland Japan and the Philippines, he wanted to deploy and was able to get attached to 3rd Reconnaissance Battalion when it was sent to Fallujah.

Krissoff said things were starting to get “rough” in Anbar Province before Nathan arrived in September 2006. As Nathan deployed, his brother Austin was preparing to enter officer candidate school, having recently graduated from college.

“Almost five years to the day after September 11, 2001, I have the chance to put my money where my mouth is in terms of service,” Nate wrote in an email to his family, according to the book, “For Love of Country” by Howard Schultz and Rajiv Chandrasekaran. “I’m constantly reminded of that famous quote from Tom Hanks’ character at the end of Saving Private Ryan: ‘Earn this.’ Earning it will mean sacrifice, determination, doing my job to the best of my ability. I chose this, and I wouldn’t have it any other way.”

Nathan, then 25, was killed Dec. 9, 2006, when his Humvee drove over explosives that had been buried in a dry riverbed. Nathan, who was sitting in the right rear seat, took the brunt of the blast.

He was remembered as a natural leader who was dedicated to his Marines and had a talent for collecting information that could potentially save lives.

After his son was laid to rest, Krissoff got back to work. However, there was a void, something left unfulfilled. He got the idea to join the service after a visit and a conversation about theater medicine with Nathan’s battalion commander.

“At that point, I contacted a Navy medical recruiter and expressed my interest [in becoming a battalion surgeon taking care of wounded and injured Marines],” Krissoff said. “He politely thanked me for my interest but doubted I could get an age waiver since I was 60 at the time.”

In August 2007, President Bush went to Reno to give a speech. Afterwards, he met with families who had lost loved ones in Iraq and Afghanistan. At the conclusion of an emotional meeting, Bush asked if there was anything that the families needed.

“I asked him directly, ‘I’m an orthopedic surgeon and wanted to serve in the Navy medical corps but was told I was too old, and no disrespect sir, I’m younger than you are,’” Krissoff recalled. Bush looked to Krissoff’s wife, who was supportive.

“He said, ‘No promises, but we’ll see what we can do,’” Krissoff said. “Two days later, I got a call from the recruiter. Kind of chuckling, he said, ‘Bill, it looks like you got your age waiver.’”

Krissoff entered the service as a lieutenant commander in the Navy and joined a reserve unit, 4th Medical Battalion, based out of San Diego. Intent on deploying, he took every combat medical course available. Then he raised his hand and volunteered.

In February 2009, he arrived in Iraq for a seven-month deployment. The country was mostly pacified by that time so the care was predominantly routine, he said. He was able to visit Austin who was deployed to Iraq with the Marines. Then he returned home.

Back in the states, Krissoff took active-duty orders to Camp Pendleton, Calif. After only a few weeks, he heard that the next rotation of doctors was heading to Afghanistan — and they had an opening. Once again, he volunteered. He hadn’t even unpacked his bags from Iraq.

Krissoff arrived at Camp Bastion in southern Afghanistan as the battle for Marjah was kicking off in February 2010. He was resolved to finish what Nathan started and get Marines back home safely.

“We saw lots of combat injuries,” he said. “Probably two-thirds were extremity injuries.”

With so many injuries to arms and legs, Krissoff said the goal was to clean the wounds, stabilize the patients and move them to more capable medical facilities out of theater.

In his time in Afghanistan, Krissoff served as the primary or assistant surgeon on 225 serious casualties, including countless amputations, according to “For Love of Country.” Marines coming into Bastion with a heartbeat had a 97 percent chance of making it to the next facility alive.

“The results were good, and the care, in my opinion, was second to none,” Krissoff said.

He served for six years. He also deployed to Morocco and Guantanamo Bay, Cuba.

While Krissoff admits you never find closure after the loss of a loved one, he feels that he did finish what Nathan started.

“I was pretty much inspired by both sons who joined the Marines to put the uniform on and to serve … [Nate] was a natural leader with a keen wit, wry grin, and he was a joy to us, for sure.”