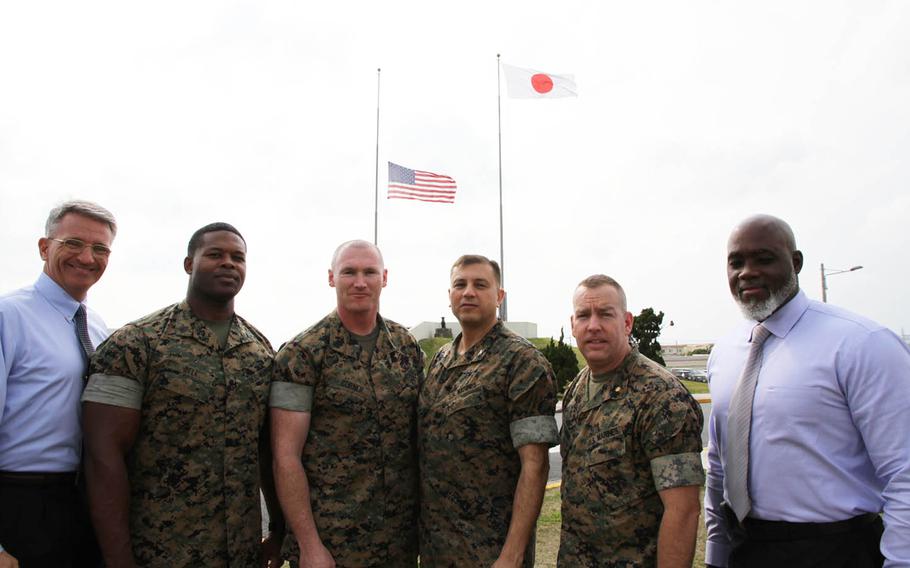 CAMP FOSTER, Okinawa — Marines came to the aid of flight attendants when a belligerent passenger disrupted a Saturday flight from Honolulu to Tokyo.

About 50 Okinawa-based Marines were aboard the United Airlines flight, which had no air marshal, when they were called on to help restrain an out-of-control South Korean man, said Maj. Troy Cronbaugh, of Cedar Rapids, Iowa.

Cronbaugh, who sat in the same row as the disgruntled passenger, said Marines were watching in-flight entertainment about 1 1/2 hours into the trip when the 72-year-old man became irate.

The man, a retired farmer, was abusive toward his wife and flight attendants after they tried to stop him from doing yoga during the meal service, The Associated Press reported. He refused the staff’s repeated requests to sit down and lashed out at Cronbaugh, yelling for him to “Shut up!” even though he wasn’t speaking, the Marine said.

The man also yelled, “You’re not God!” the Marines said.

Others grew increasingly nervous as the situation escalated.

“They were visibly concerned, shaken and scared,” Cronbaugh said of the flight attendants, who took the man to the rear of the plane in an effort to calm him down.

Attempts to reason with him were futile, however, so they asked the Marines for a hand.

“I said I’d be happy to help,” said Cronbaugh, who took four of the biggest Marines he could find to the back of the plane where the man was squatting.

Marines said they showed the man flex cuffs and calmly told him he would be restrained, while flight attendants filmed the interaction.

The Korean placed his hands into the cuffs, but became upset when his feet were also cuffed, said Cronbaugh, who added the man made threats and tried to head-butt, spit on and bite the Marines as he was carried to a seat and buckled in.

An American diplomat sat with the Korean as the plane returned to Hawaii, where he was taken into custody.

Law enforcement officials thanked the Marines for their professional restraint, Cronbaugh said. Often times, unruly passengers must be physically forced to comply, and can be bruised and battered in the process. The Korean man was reportedly restrained without a scratch.

“You see all this stuff on the news,” said Staff Sgt. Timothy Bell. “I didn’t believe it [was happening].”

The AP reported that the man was released on $25,000 bond but is not allowed to leave Oahu. He also must undergo a mental-health evaluation.

“I didn’t know what we were going to experience when we went to the back of that plane,” Cronbaugh said. “I’m glad it turned out well.”

A United Airlines spokeswoman confirmed that an incident occurred but declined to provide details.