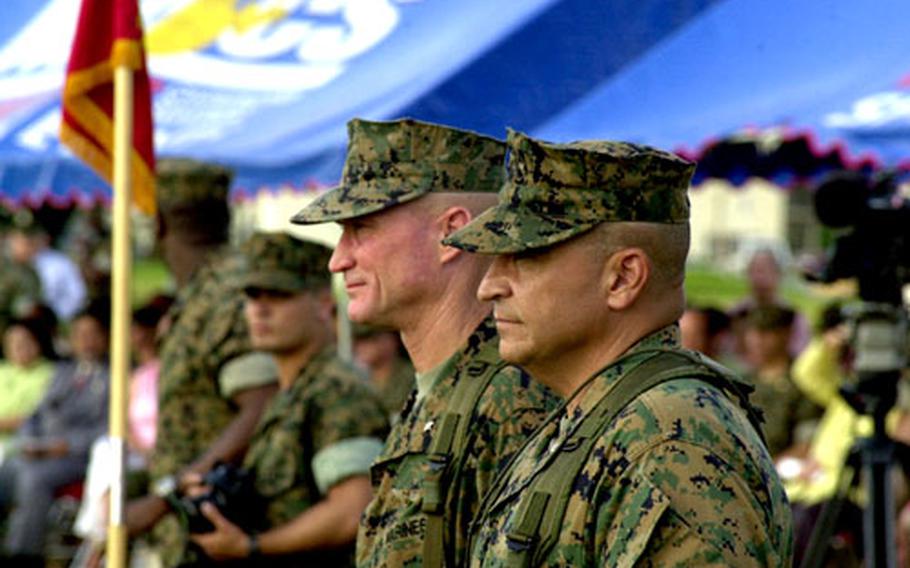 CAMP FOSTER, Okinawa &#8212; The commander of all Marine Corps bases on Okinawa said goodbye and welcomed his successor during a change-of-command ceremony Friday.

Brig. Gen. James Flock, who has been reassigned to U.S. Marine Headquarters in Washington, D.C., handed over the ceremonial flag to newcomer Brig. Gen. Joseph Medina.

A long list of senior ranking officials from the Marine Corps and other branches attended the ceremony, as did dignitaries from local governments and the Japanese Self-Defense Force.

Although running bases is far different from taking part in operations, the work has its own rewards, Flock said. &#8220;This job was a challenge because of the human dynamics involved in forward basing,&#8221; he said.

Medina recently relinquished command of San Diego-ported Expeditionary Strike Group Three, a position he took after being promoted to brigadier general in 2003.

After readying Strike Group Three, he commanded the Belleau Wood Strike Group through a six-month deployment to Iraq, where he was assigned as commander of Task Force 58.

He also was commander of 3rd Battalion, 2nd Marine Regiment, which came to Okinawa in 1996 as part of the unit deployment program.

Medina acknowledged the island&#8217;s role in the grand scheme of the Pacific theater.

Flock said that Medina will take over a set of bases that are well-kept because of the hard-working Marines, sailors and civilian employees on Okinawa.