Okinawa Marines get a leg up on language training 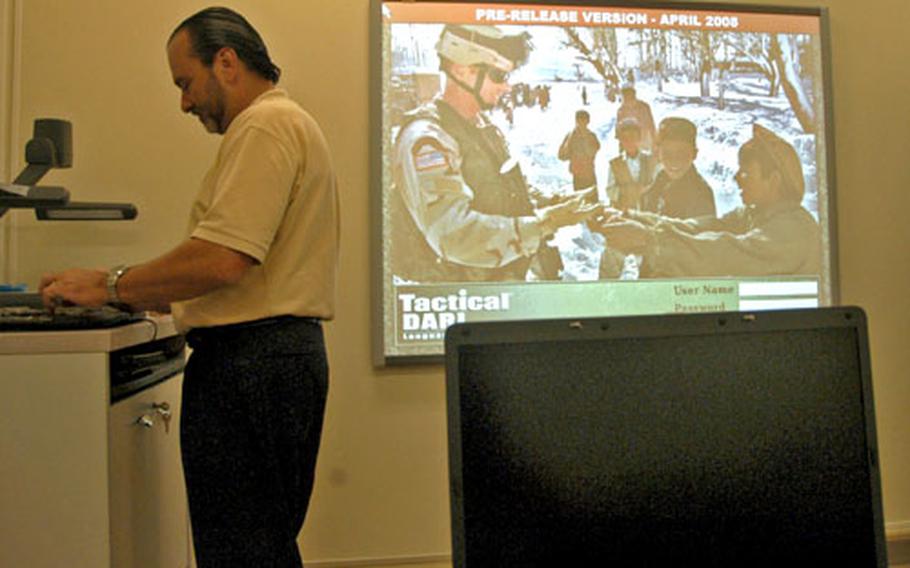 Mike Russell, a project manager with Trofholz Technologies Inc., demonstrates how to use one of the language programs offered at the new Language Lab Resource Center. Trofholz Technologies designed and installed the software, which will be used at labs at camps Foster, Hansen and Schwab. (Natasha Lee)

The Language Lab Resource Centers, which opened last week at camps Foster, Hansen and Schwab, offer software aimed at teaching troops how to communicate with locals during deployments.

Students can choose from 150 languages, including Arabic, Hindi and Farsi.

Students can record conversations, then let the software review them for proper dialect and pronunciation; familiarize themselves with a country&#8217;s current news events through a broadcast cable network link; and learn etiquette specific to a region.

Cultural awareness is critical to a successful mission, particularly for troops patrolling villages and meeting with officials, said Mike Russell, a project manager with Trofholz Technologies Inc., which developed the software. Troops should be able to ask, "Where is your village leader?" and "Have you seen any insurgents in this area?" Russell said.

Once servicemembers have finished the course, "everyone has an understanding of what to do and what not to do," Russell said. "It allows [Marines] to be able to hit the ground and not be shocked."

One program, the Tactical Language & Cultural Training System, features video lessons starring an electronic Marine character who demonstrates conversations for different scenarios, from how to enter a village to how to properly talk to locals.

The character reviews dialogue, and also the proper hand gestures and movements so as not to offend the villagers during conversations.

"This is another tool that will help them benefit professionally and it may actually save your life in some situations," Graham said.

The programs are offered to individuals and units.