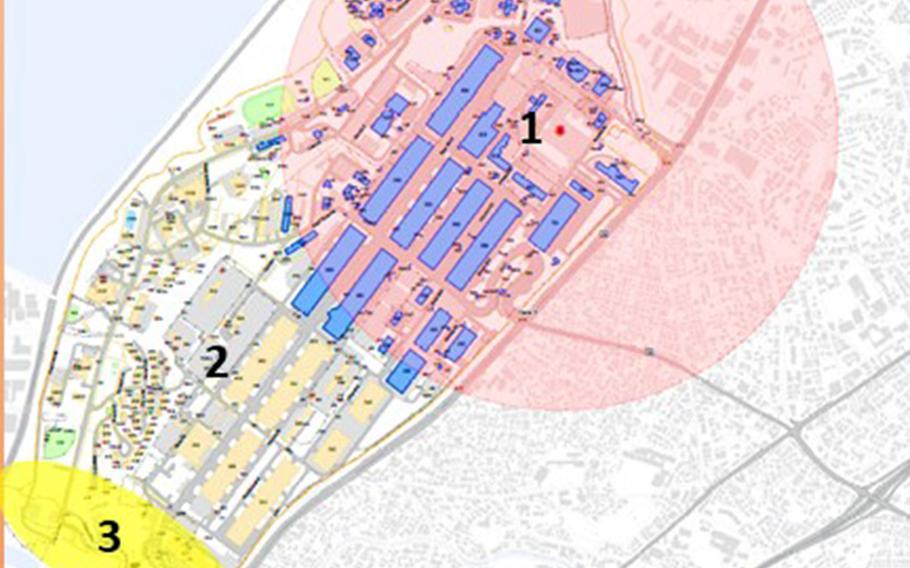 Camp Kinser, a Marine Corps base on Okinawa, will be evacuating more than 100 buildings while unexploded ordnance is removed on Sunday, Dec. 15, 2019. (U.S. Marine Corps)

CAMP FOSTER, Okinawa — The Marine Corps has ordered over 100 buildings, including six housing towers, on Camp Kinser emptied for four hours Sunday to accommodate the removal of unexploded ordnance.

The removal operation should be finished by 6 p.m., according to the notice.

Camp security personnel will verify that the area is completely evacuated, according to the post.

Most of Kinser, a Marine Corps logistics base in Urasoe city, will be closed by noon Sunday. Gate No. 2 will be closed; Gate No. 1 will be restricted to emergencies and essential personnel only, according to the base announcement.

Marine officials did not respond to requests seeking further comment on Friday. According to the announcement, the piece of unexploded ordnance was found at a construction site on the camp.

Roughly 600 unexploded pieces of ordnance are processed on Okinawa each year, according to the Naha-based Japan Self-Defense Force 15th Brigade’s website.

Residents of Urasoe city were not asked to evacuate their homes and businesses during the removal, a city official told Stars and Stripes on Friday.

According to safety standards set by the Japan Self-Defense Force, the operation will not affect any off-base residents or buildings, the city official said. Some government officials in Japan customarily speak on condition of anonymity.

Okinawa Defense Bureau declined the comment on details of the ordnance.