Okinawa makes newcomer briefings a must 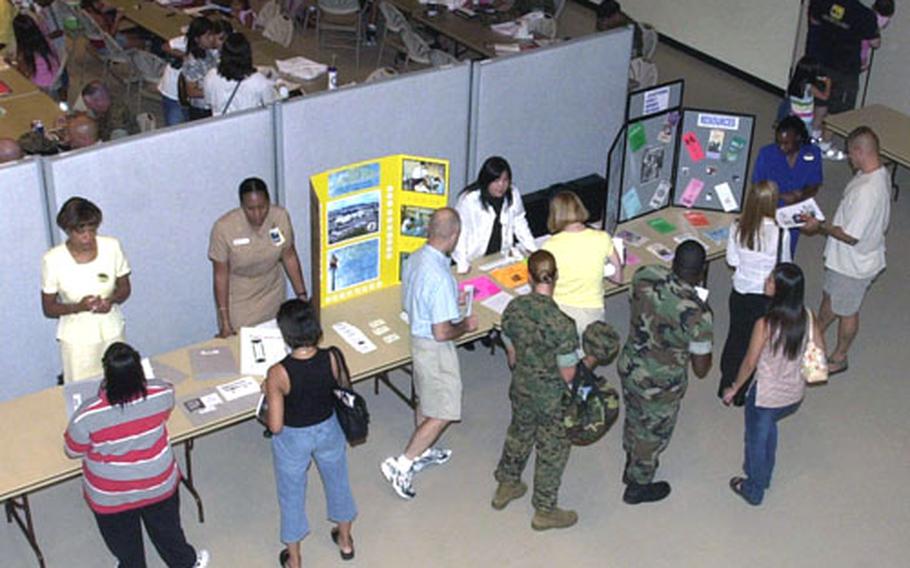 Servicemembers and their families who recently arrived on Okinawa gather information during the Newcomer&#39;s Orientation on Camp Foster. Recent changes to the program include all children 10-years of age and older must attend the brief and no one, including family members, can get their drivers license until they attend. (Fred Zimmerman / S&S)

A recent Marine Corps Bases Japan order change makes it mandatory that anyone seeking to drive on Okinawa attend the brief, according to Donna J. Braggs-Champion, Marine Corps Community Services program coordinator. Even teenagers living on the island for several years and now eligible for a base license must attend, she said.

The change has also made the orientation a requirement for all accompanied Marine and Navy personnel, civilians, family members age 10 and up and all unaccompanied E-6s and above in the two services.

Prior to the order, children were not required to attend the daylong briefing, which used to be only two days a month, but is now every Wednesday at the MCCS Performing Arts Auditorium on Camp Foster.

Braggs-Champion said the new youth and teen portion is designed to let kids know what&#8217;s available to them, as well as the do&#8217;s and don&#8217;t&#8217;s. The children take a bus tour of the base, including the Youth and Teen centers, library, bowling center and other popular kid hangouts.

She said they also make a stop at the base exchange, where they are shown the security cameras and briefed on the consequences of shoplifting.

Jacob and fellow 12-year-old Michael Bodge both said they liked the tour, and especially liked the free voucher for one game of bowling they received.

Once the children come back from their tour, they join their parents for more briefings, said Braggs-Champion.

They all sit through the provost marshal&#8217;s and base inspector&#8217;s briefing to learn what they can and can&#8217;t do and about acceptable behavior while living as a guest of Japan.

Other briefings include information about substance abuse, Department of Defense Dependents Schools, the fire department and water safety.

Gunnery Sgt. Diane Bodge, head of 1st Marine Air Wing, said even though she was stationed here before, the orientation was very useful because so much has changed.

Bodge was surprised at all the free offerings available, like the origami and Japanese language classes, she said.

Starting with the briefing next Wednesday, the orientation will be cut to half a day. Braggs-Champion said despite the shorter time, customers should still get all the information they can handle.

An information fair offers additional information with various organizations, both on- and off- base, manning booths to offer their products and services. Newcomers are able to gather information on everything from the base Tickets and Tours office to long distance providers and off-base car sale companies.

Braggs-Champion said free child care is offered on Camp Foster on a space-available basis, as well as free bus transportation to the briefing. For child care call DSN 645-4117, and for bus reservations or more information on the orientation, call DSN 645-8395.