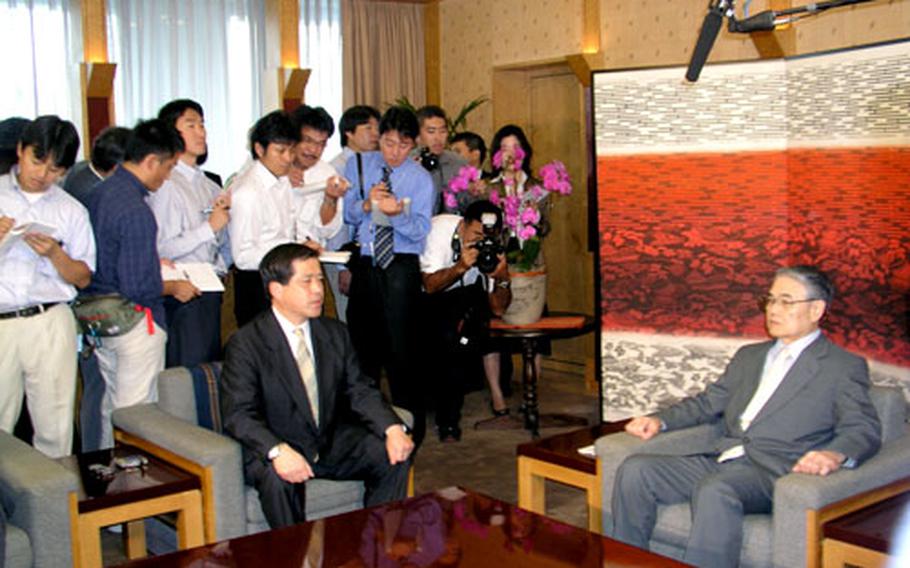 And that&#8217;s just what he said Monday morning after an 80-minute closed-door meeting to discuss the plan with Okinawa Gov. Keiichi Inamine.

&#8220;The governor indicated a very critical view,&#8221; Kitahara said before traveling north to Nago, where the city mayor also has voiced opposition to replacing Marine Corps Air Station Futenma with a new airport on Camp Schwab, within Nago city limits.

Kitahara also stopped in Kin, where Camp Hansen is located. The interim report calls for consolidating many Marine functions at Hansen and letting Japan Self-Defense Forces train there.

Okinawa Gov Keiichi Inamine on Monday rejected the Camp Schwab alternative, which is a key part of the realignment plan. It calls for eventually moving some 7,000 Marines from Okinawa and moving most base functions to northern Okinawa, away from heavily populated areas.

The 14-page report was issued Saturday during the so-called &#8220;2-plus-2&#8221; meeting among U.S. officials Condoleezza Rice and Donald Rumsfeld, secretaries of state and defense; and their Japanese counterparts, Nobutaka Machimura and Yoshinori Ohno.

A key point of the plan for Okinawa is abandoning a massive project to build a new, sea-based Marine Corps air station off Okinawa&#8217;s northeast shore in favor of a smaller project at the tip of Camp Schwab.

Inamine, who accepted the former project because it offered joint use by civilian aircraft, Monday called the new version &#8220;not feasible.&#8221; The Schwab plan was among several considered and rejected years ago, he said.

He was cautious about the agreement to let Japan Self-Defense units in urban areas of Okinawa share Kadena Air Base, Camp Hansen and other areas. &#8220;That requires careful assessment to see if it contributes to reducing the (military) burden of Okinawa,&#8221; Inamine said.

Kin Mayor Tsuyoshi Gibu also voiced disappointment with the interim report, saying, &#8220;I was expecting that our burden would be reduced. &#8230; But concentrating the military installations in the northern part of the island and having the Ground Self-Defense Force jointly use the bases &#8230; does nothing but increase the burden.&#8221;

Of Japanese land area used solely by U.S. forces, 75 percent is on Okinawa. About half of the approximately 51,900 U.S. troops in Japan are assigned to Okinawa. After massive anti-base protests in 1995, the United States and Japan agreed in late 1996 to reduce the land area U.S. bases use on Okinawa by 21 percent. That process continues.

The original agreement to replace MCAS Futenma within seven years was sidetracked by opposition from local anti-base activists and environmentalists.