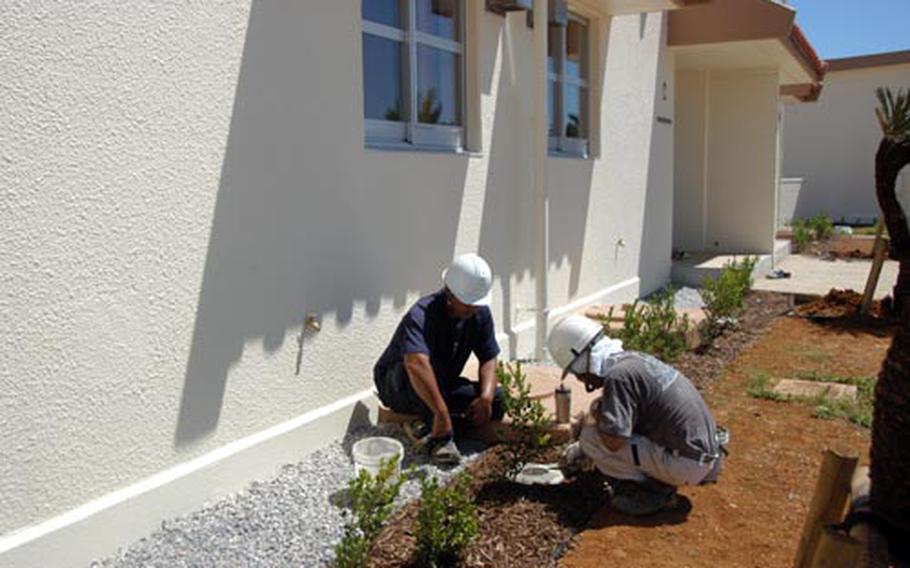 Workers plant shrubs along Washington Heights units on Kadena Air Base as part of a renovation program. (Natasha Lee / S&S)

Workers plant shrubs along Washington Heights units on Kadena Air Base as part of a renovation program. (Natasha Lee / S&S) 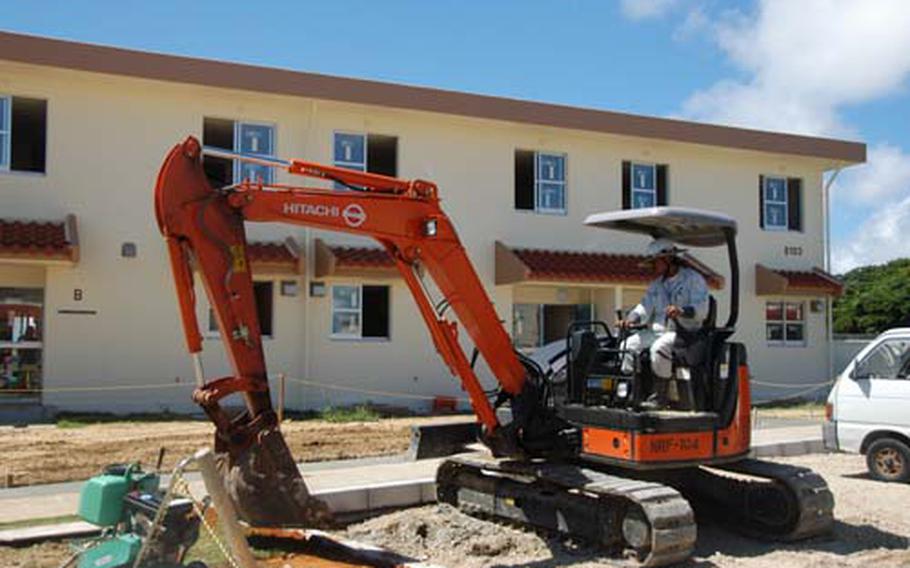 A worker digs at the Washington Heights housing units on Kadena Air Base. The units include two-bedroom townhouses and apartments that are being renovated under the Post Acquisition Improvement Program, manned by the Air Force. (Natasha Lee / S&S)

KADENA AIR BASE, Okinawa &#8212; Housing units at Kadena Air Base and other military bases on the island are getting face-lifts thanks to an ongoing $901 million government renovation program.

About 570 units on Kadena, Plaza Housing and Camp Courtney are being "modernized."

Included will be kitchen upgrades, living room and bedroom expansions, and improvements to the air conditioning units and landscaping.

Construction is expected to be completed by 2011 and cost around $90 million, said Capt. Kathleen Farrell, chief of design and construction for the 718th Civil Engineer Squadron&#8217;s Engineer Flight.

The revamping is the sixth phase of the Post Acquisition Improvement Program, or PAIP, a 15-phase project to refurbish all military housing here by 2019.

The program, funded by the U.S. government and manned by the Air Force, started in 2001.

Under PAIP, about 4,898 units will be upgraded; 626 units have been completed, officials said.

The renovation is the first major overhaul of such a large number of military apartments, single homes and townhouses in about 50 years, Farrell said.

"These are huge quality-of-life improvements," she said.

The improvements should make residents feel like they are living in their own home rather than in government housing, said Kevin Bonner, an associate with the Air Force Center for Engineering and the Environment helping oversee the project.

"It&#8217;s more to it than just slapping on some paint and redoing the yard," he said.

Farrell said one of the biggest headaches for residents is the shuffling around.

Neighborhoods are closed down for six months to a year for construction, she said.

In the meantime, residents are relocated to vacant housing units &#8212; a process that can take 30 to 60 days to complete, Farrell said.

Typically, residents who&#8217;ve lived on base longer receive first priority in being relocated into the newly renovated units, Bonner said.

Phase 7 of PAIP will include the renovation of 511 units, Farrell said.

The contract should be awarded by September.