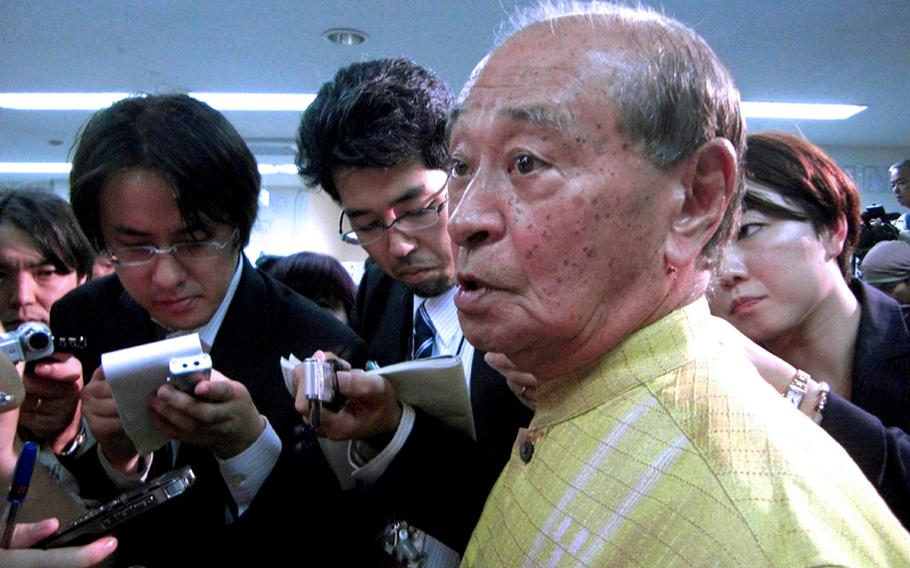 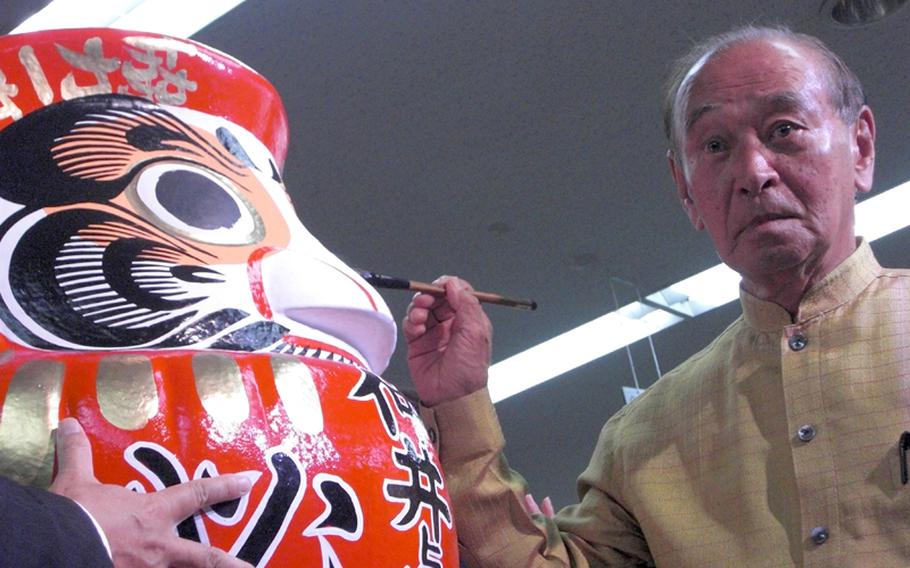 Buy Photo
Hirokazu Nakaima celebrates his reelection Sunday by painting an eye on a ''daruma'' figure, a Japanese custom to celebrate achievement of one’s wish. (Chiyomi Sumida/Stars and Stripes)

NAHA, Okinawa &mdash; The winner of Sunday&rsquo;s Okinawa gubernatorial election said he would follow through on a campaign promise to block the move of Marine Corps Air Station Futenma within the island prefecture.

&ldquo;The plan to move Marine operations to Henoko is practically gone,&rdquo; incumbent Gov. Hirokazu Nakaima said shortly after his victory was announced at his campaign office in Naha late Sunday.

Both Nakaima, 71, and his major challenger, Yoichi Iha, 58, pledged to stand in the way of a plan to replace Futenma with a new base and runway on Camp Schwab and a landfill in Oura Bay near Henoko in Nago.

Their stance was more than campaign rhetoric, as the Okinawa governor has the power under Japan&rsquo;s Public Water Body Reclamation Law to block construction of the 1.1-mile runway planned for reclaimed land in Oura Bay.

If Nakaima follows through on his campaign promise, it would undermine a 4-year-old agreement between the U.S. and Japan concerning the relocation of 8,600 U.S. Marines to Guam. The plan, which would lead to the decrease of nearly one-third of the U.S. troops currently on Okinawa, hinges on construction of the new base and runway.

&ldquo;The U.S. military does not stay on Okinawa to protect Okinawa alone,&rdquo; Nakaima said. &ldquo;Now that moving the operations within Okinawa is impossible, a solution must be sought where the burden of hosting the military is shared equally by the whole nation.&rdquo;

The central government does have the option of amending the reclamation law if it wants to pursue the plan, but experts have said that such a forcible approach is something the government wants to avoid because it would only ignite protests.

Nakaima, who initially supported the plan but changed his stance earlier this year, received 335,708 votes, beating Iha, an anti-military former Ginowan mayor, by about 38,000 ballots in the election, according to voting officials. Official results were expected Monday.

Calls for moving the Futenma air operations out of Okinawa have increased since the summer of 2009.

Yukio Hatoyama of the Democratic Party of Japan became prime minister after promising such a move. But Hatoyama stepped down in May of this year after yielding to pressure from the U.S. to keep the operations on the island.

Hatoyama&rsquo;s successor, Naoto Kan, has said that he would honor the bilateral agreement and build a new Marine air facility at the planned site. Shortly after Nakaima&rsquo;s victory, Deputy Chief Cabinet Secretary Tetsuro Fukuyama told reporters in Tokyo that the government would continue its effort to carry out the plan, according to Jiji Press.

&ldquo;We take it as one of the manifestations of public opinion,&rdquo; he said of the election outcome. &ldquo;We will make ardent efforts so that we can have the understanding of Governor Nakaima as well as people of Okinawa.&rdquo;

Exit polls showed voters&rsquo; concerns were split between the Futenma issue and the economy.

&ldquo;My priority is the economy,&rdquo; Ko Miyazato, 31, said at a polling station in Okinawa City, near Kadena Air Base. He said the economic contribution of the U.S. military bases, including jobs, is too big to ignore.

His wife, Kumiko, 32, said she did not have much hope of Marine air operations being moved off the island, not matter who won.It&rsquo;s just more talk, she said.