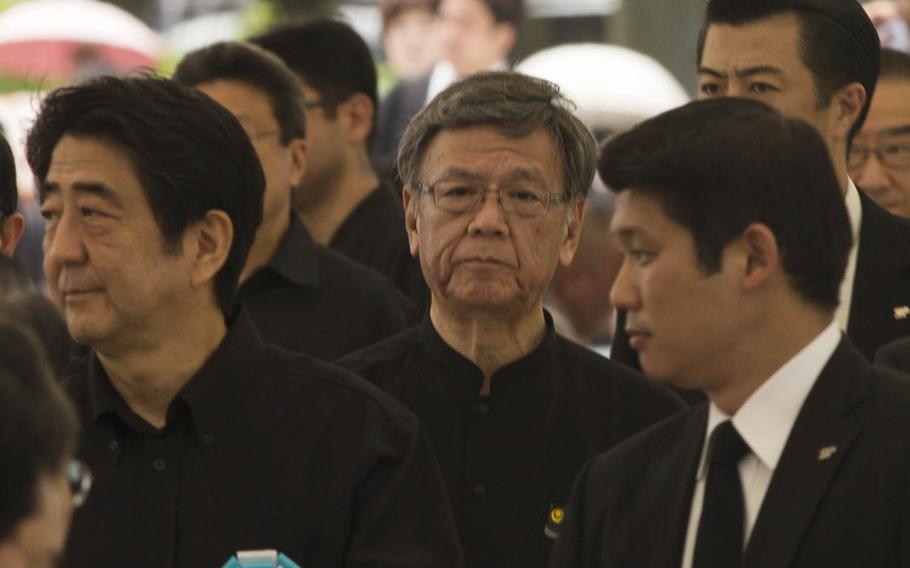 CAMP FOSTER, Okinawa — Officials on the southern island prefecture of Okinawa have requested sweeping changes to the status of forces agreement governing U.S. personnel in Japan.

Onaga presented the proposal to Japanese Defense Minister Itsunori Onodera during a meeting Monday at Tokyo’s Ministry of Defense. It requests dozens of changes to SOFA’s 11 articles, encompassing almost every aspect of the U.S. presence in Japan.

An introduction to the petition written by the governor cites the following reasons as the driving force behind the request: the excessive burden placed on Okinawa by hosting approximately half of the U.S. forces in Japan; crimes committed by U.S. personnel, including the brutal killing of a Japanese woman last year in which a civilian base worker and former Marine is accused; the crash-landing of an MV-22 Osprey off Camp Schwab in December; and other “incidents, accidents, and environmental problems derived from the bases.”

“Every time incidents and accidents caused by U.S. service members and civilian components take place, we, the Okinawa Prefectural Government, have repeatedly urged both the Government of Japan and the U.S. to implement preventive measures, enforce stricter discipline and enhance education programs,” Onaga wrote. “However … the situations remain totally unchanged.”

“Therefore, we would like to call on both governments to fully understand the status quo in Okinawa, review SOFA and immediately work on reducing the excessive base-hosting burden imposed on Okinawan residents by consolidating the U.S. bases etc.,” Onaga wrote. “We believe such efforts will lead to the fundamental solution to the base issues.”

Among the biggest proposed changes focus on criminal justice. The governor is seeking the ability to transfer SOFA personnel suspected of a crime to Japanese custody before charges are levied, the ability to seize the property of off-base SOFA personnel during investigations and Japanese control of off-base crash investigations. He also wants the U.S. and Japanese governments to foot the bill for any unpaid damages left by the perpetrators of illegal acts, even if that means seizing a SOFA members benefits or pay.

Proposed changes regarding environmental issues include mandating joint surveys of on-base projects and continuous reporting to local officials, as well as site access and testing when environmental pollution occurs on base. The petition also requests detailed information on and access to U.S. facilities due to be returned to Japanese control at least three years in advance, so that environmental surveys can be conducted.

A copy of the proposal — which also seeks to bar Japanese locals from playing golf at U.S. bases and end friendship port visits by Navy vessels — was also submitted to new U.S. Ambassador to Japan William Hagerty, prefectural officials said. The U.S. Embassy in Tokyo is aware of the request, a spokesman told Stars and Stripes in an email on Wednesday.