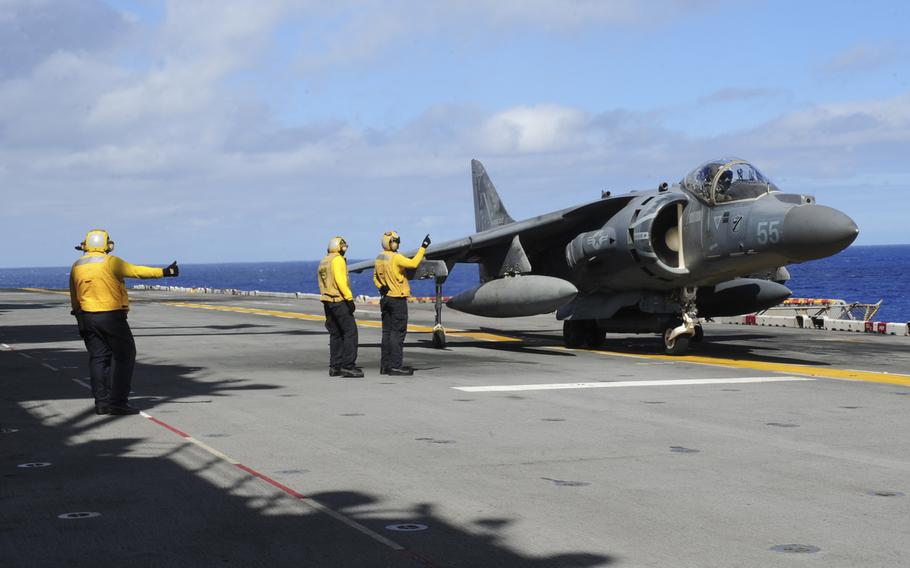 Flight deck personnel direct an AV-8B Harrier II, assigned to 13th Marine Expeditionary Unit, as it prepares to take off from the amphibious assault ship USS Boxer in the Pacific Ocean in August 2016. Okinawa's governor demanded Friday, Sept. 23, 2016, that Marine officials ground all Harrier jets pending an investigation into a Marine Harrier crash into the sea east of the island. (Eric Burgett/Released/Courtesy U.S. Navy)

CAMP FOSTER, Okinawa — Okinawa’s governor demanded Friday that Marine officials ground all Harrier jets pending an investigation into a Marines’ AV-8B crash into the sea east of the island.

The plane was on a routine training flight when it went down, U.S. military officials said. The pilot ejected safely and was rescued. The cause of the incident is under investigation.

“Although damage to the Okinawa residents has not been reported, it is extremely regrettable, as one aircraft-related accident could result in a serious accident involving human lives and property,” Gov. Takeshi Onaga said in a statement addressed to III Marine Expeditionary Forces commander Lt. Gen. Lawrence Nicholson.

“Such accidents cause great anxiety among the residents of Okinawa who are forced to live with the U.S. military bases. We strongly protest the occurrence of such an airplane crash, because we should say, the current preventive measures as well as safety management are not strict enough, and therefore cannot contain our anger.”

Marine Corps officials did not immediately respond to requests for comment or updates on the crash.

The crash sent Japanese coast guard and U.S. Air Force assets scrambling in an attempt to recover the pilot. He was recovered by the Air Force’s 33rd Rescue Squadron, 18th Wing, out of Kadena Air Base. Coast guard officials reported they found no debris when they arrived on the scene about 100 miles east of Okinawa, just an oil slick.

The jet was assigned to the 31st Marine Expeditionary Unit.