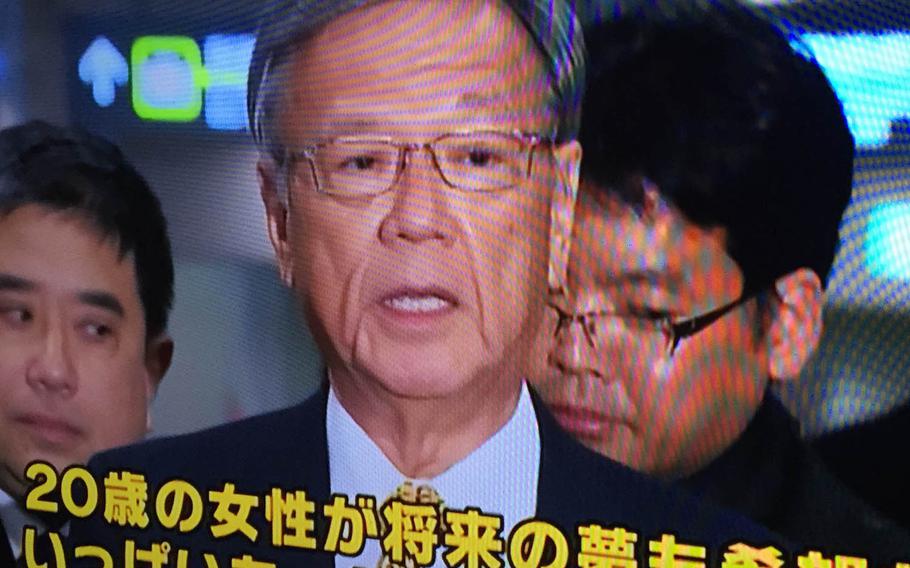 In this image taken of a Fuji Television broadcast, Okinawa Gov. Takeshi Onaga speaks to Japanese reporters about the death of an Okinawa woman, Friday, May 20, 2016. Onaga has called for revisions to the status of forces agreement that spells out the handling of U.S. base personnel serving in Japan. ()

Okinawa’s governor has expressed disappointment that President Barack Obama and Japanese Prime Minister Shinzo Abe did not mention amending the status of forces agreement during a joint news conference ahead of the G-7 economic summit.

Spurred on by the arrest of a civilian U.S. base worker suspected in a 20-year-old Okinawan woman’s death, Gov. Takeshi Onaga has called for revisions to the bilateral accord that spells out the handling of U.S. base personnel serving in Japan.

Okinawans have complained the SOFA, which allows a suspect to take part in Japanese investigations voluntarily in some cases, is overly protective of Americans charged with crimes in Japan.

“Unless the accord is revised, the concerns the people of Okinawa have over the bases will not be allayed,” Onaga told reporters in Naha, according to a Kyodo News report.

Obama extended his “sincerest condolences and deepest regrets” about the incident during a Wednesday night meeting with Abe ahead of the two-day G-7 summit in Ise-shima.

“As Japanese prime minister, I protested sternly to President Obama over the incident in Okinawa,” Abe told the news conference that followed the meeting. He also asked the U.S. to take steps to prevent future incidents.

Obama, who said the U.S. will “continue to cooperate fully with the investigation and ensure justice is done” in Japan, also mentioned the SOFA “does not in any way prevent the full prosecution and the need for justice under the Japanese legal system.”

Kenneth Franklin Gadson, 32, who goes by his Japanese wife’s family name of Shinzato, was arrested May 19 on a charge of illegally disposing of Rina Shimabukuro’s body, although other charges are possible.

Gadson, a civilian working for a military contractor at Kadena Air Base, reportedly told police he attacked Shimabukuro, who was out on her evening walk, from behind with a stick before strangling her.

Approximately 2,000 people attended a protest rally Sunday in front of the main gate of the Marine Corps headquarters on Camp Foster, and a mass Okinawa-wide rally is scheduled for June 19. Another protest was held Wednesday in front of Kadena’s main gate to condemn the slaying and call for a smaller military footprint, revision of the SOFA and cancellation of a plan to build a new military runway at Henoko.