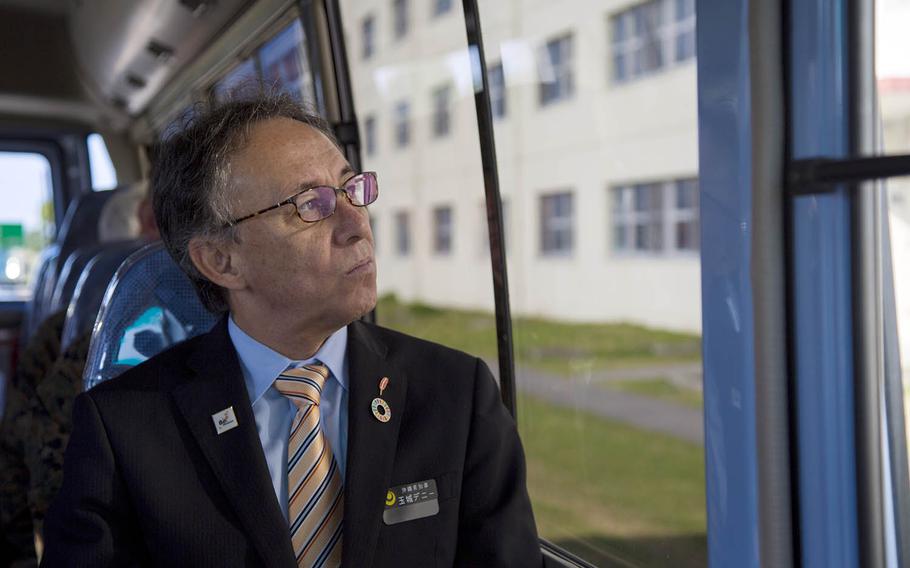 CAMP FOSTER, Okinawa — Okinawa’s Gov. Denny Tamaki has called for relocating Marine air operations outside of the island prefecture following a prefecture-wide referendum over the weekend.

Approximately 72 percent of voters who turned out Sunday voted against plans to reclaim land in Oura Bay at Camp Schwab for a new military runway. The plan is to close Marine Corps Air Station Futenma and move air operations to Henoko on Okinawa’s less populated northern coast.

Tamaki’s comments came a day after the vote as he answered questions from members of Okinawa’s prefectural assembly about the dangers posed by Futenma, which Defense Minister Takeshi Iwaya in October referred to as “the most dangerous air base in the world,” if the relocation to Henoko is effectively blocked.

“I understand that it has been discussed between the U.S. and Japan, through the U.S. military reorganization plan, that relocating Futenma outside of Japan was part of it, and I believe that Tokyo also understands that is a part of the plan,” he said in response to a question from lawmaker Noriji Yamakawa. “So why don’t they move forward accordingly and relocate it outside of Japan — and I believe that is the best plan.”

It is unclear whether Tamaki was referring to early discussions about the relocation or the relocation plan itself, which has always been centered on keeping air operations within the prefecture. The plan to build the runway at the isolated Camp Schwab in northern Okinawa was agreed upon during bilateral negotiations in 2006.

Tamaki’s comments come just days before he is scheduled to meet Friday in Tokyo with Prime Minister Shinzo Abe. Abe has said the relocation project will continue regardless of the referendums result.

His administration has maintained that U.S. military bases in Okinawa are needed due to the island’s strategic importance and the deterrent capabilities of U.S. troops stationed there.

Local lawmakers wrangled over how best to fight the relocation, which they have typically been against and is already underway. The second phase of the project is already being prepped with surveys and seawall repairs.

The second phase would complete about one-fourth of the 0.6 square-mile total reclamation project.

Yamakawa asked if the governor considered requesting the shift off-island due to the seabed in the reclamation area in Oura Bay being softer than was previously expected.

Prefectural assembly chair spokesman Takekuni Ikeda said the assembly would continue to demand the relocation of Marine air operations outside of Okinawa — and even outside of Japan — and would not approve any changes to the plans because of the seabed conditions.

“An alternative place must be discussed with rest of nations and shouldn’t be decided in Tokyo,” Ikeda said.

Marine officials Tuesday afternoon said they could not comment on a “domestic political issue.”

“It is our goal to maintain a strong and transparent relationship with our gracious Okinawan hosts,” a III Marine Expeditionary Force spokesman wrote in a statement to Stars and Stripes. “Every day we strive to balance the concerns of the local community along with the necessity to maintain constant readiness in support of our treaty commitments with our partners and allies.”

Local scholars believe there is little chance the current relocation plan will change. However, they said the composition of the seabed will cause further delays giving activists more time to fight the project.

“I don’t think this referendum will change the U.S. and Japanese governments’ minds on Henoko,” Ryukyu University professor Toshiaki Gabe wrote in an email Wednesday to Stars and Stripes. “Under the current Abe Cabinet, I don’t think the rest of nation will agree to the idea, but perhaps, when it changes to a different cabinet, it may be possible to voice the idea to relocate to outside of Japan.”