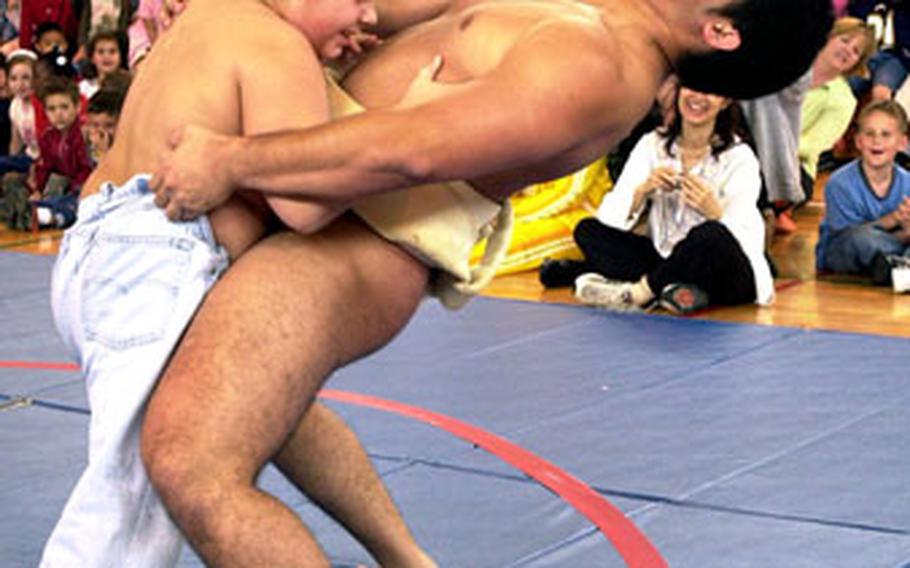 A Bechtel Elementary School student reaches out to pet a Shishi lion Tuesday as it enters the crowd after performing a dance. (Fred Zimmerman / S&S) 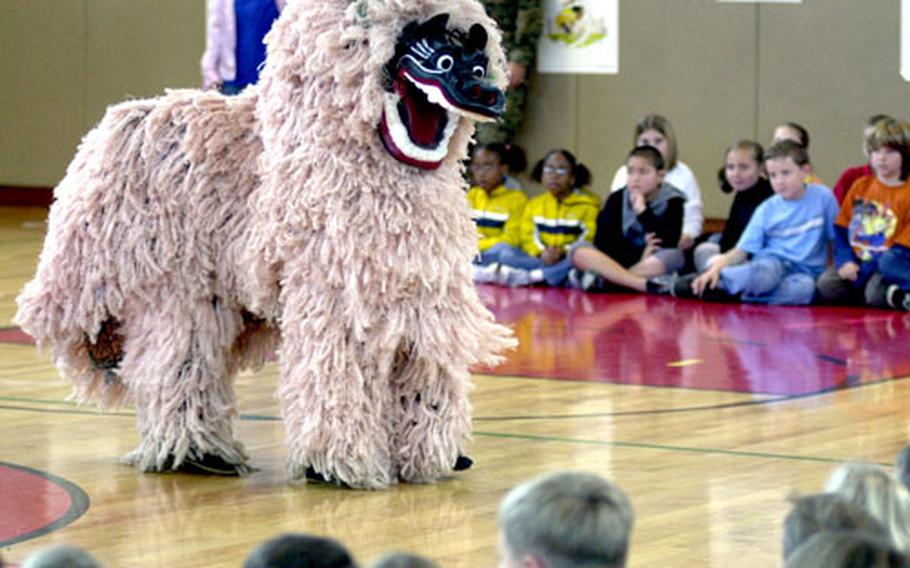 CAMP McTUREOUS, Okinawa &#8212; It was classic David vs. Goliath at Bechtel Elementary School here Tuesday as second-grader Freddie Lapan squared off against 200-plus-pound Takakatsu Wauke in the sumo wrestling ring.

Like the old story goes, Lapan &#8220;took down&#8221; the giant from the Chubu Norin High School sumo team by pushing him onto his back at the edge of the ring. Lapan won the match but no title: It all was part of the fun at Bechtel&#8217;s 17th annual Ryukyu Festival.

Wauke and the fellow members of his high school sumo team first demonstrated different sumo wrestling techniques, performing warm-ups and various throws in front of the packed gymnasium. They then took on students from the crowd, as well as teachers and Marines who volunteer at the school.

The students went undefeated, but the adults suffered one loss.

Prior to the wrestlers, the students were treated to other demonstrations, mostly from local school children. The Okinawan Kenpo Kenyukai Karate Group gave a martial arts show complete with breaking cement blocks and baseball bats; the Gushikawa Kasshin Taiko Drummers also performed.

One of the day&#8217;s highlights was the traditional lion dances by the Namihira Kodomo-Kai Bojutsu Shishimai Club, made up of dancers from Yomitan elementary and junior high schools.

The drummers were the favorite part for third-grader Alissia Diaz. She said this was her first chance to experience a bit of Okinawan culture as her family has been on the island for less than a year.

Lambert said her committee wants to share the culture with the students because &#8220;This is a precious time in their lives. &#8230; The feelings and memories they have from this will carry over forever.&#8221;