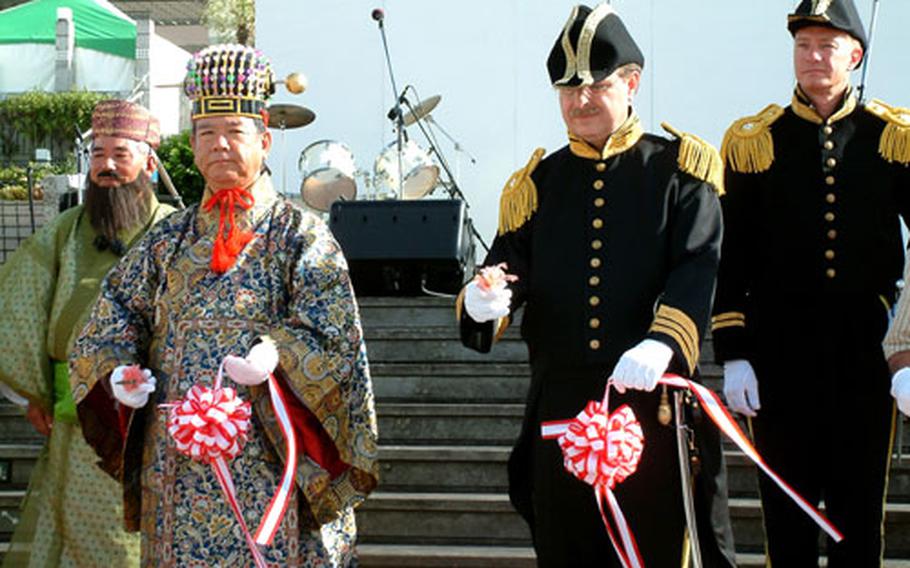 Naha Mayor Takeshi Onaga, front left, and U.S. Consulate General Timothy Betts, front right, cut the ribbon Sunday to start the "American Fest in Tomari," celebrating the 150th anniversary of the arrival of U.S. Commodore Matthew Perry&#39;s fleet in Naha harbor on its way to open Japan to foreign trade. Betts is dressed as Perry and Mayor Onaga is dressed as the King of the Ryukyus. (David Allen / S&S)

NAHA, Okinawa &#8212; The 150th anniversary of Commodore Matthew Perry&#8217;s visit to Okinawa will be celebrated Sunday and Monday in Naha.

The occasion marks the stopover of the American fleet&#8217;s journey to Japan to force the opening of Japanese ports to foreign trade.

The festival, &#8220;American Fest in Tomari,&#8221; begins at 4 p.m. each day. Naha Mayor Takeshi Onaga, in the period costume of the King of the Ryukyus, and U.S. Consulate General Timothy Betts, dressed as Commodore Perry, will participate in a ribbon cutting Sunday to start the festivities, which will feature a traditional Eisa dance by Japanese and American children, an arm wrestling competition, a music concert and a tour of the Tomari International Cemetery, where many foreigners are buried.

President Fillmore assigned Perry to establish diplomatic relations and trade. Perry negotiated with the Tokugawa shogunate to end its strict policy of seclusion and a ban on most commerce with foreign countries that had been in place for more than 200 years.