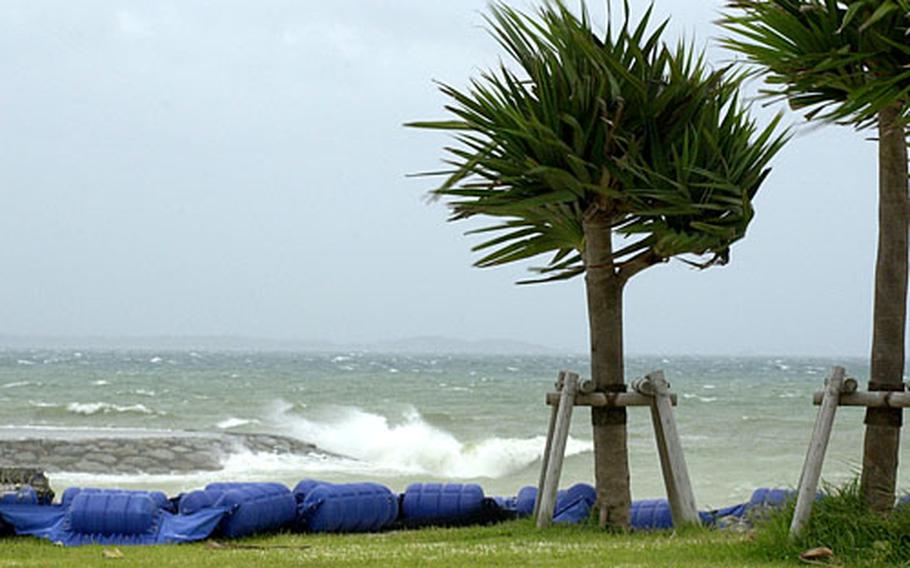 At Uken Beach near Camp Courtney, Okinawa, the surf crashed against the shore Saturday and the wind was blowing sand through the air hard enough to sting the skin. (Cindy Fisher / S&S)

At Uken Beach near Camp Courtney, Okinawa, the surf crashed against the shore Saturday and the wind was blowing sand through the air hard enough to sting the skin. (Cindy Fisher / S&S) 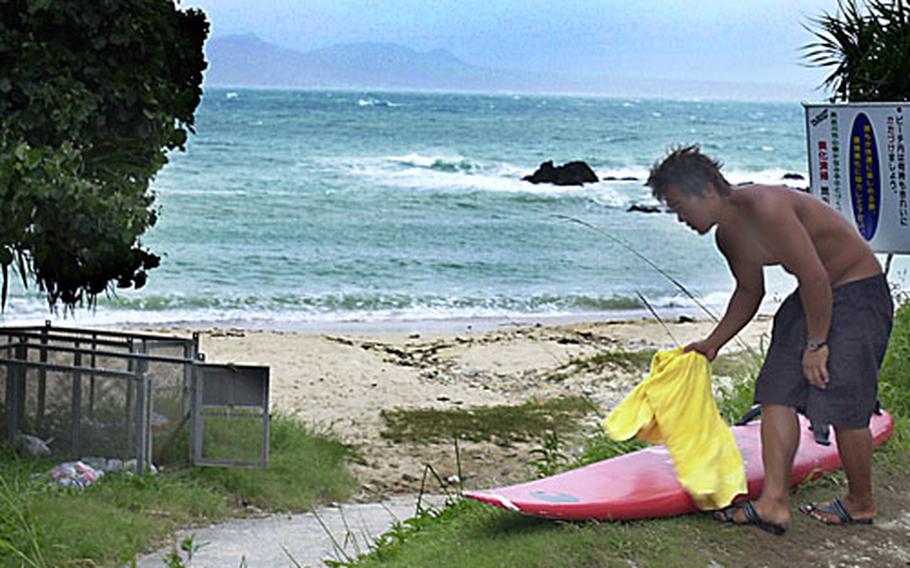 A Japanese man packs up his gear Saturday evening before leaving the shore near Camp Courtney, Okinawa, as Typhoon Ewiniar rolled in. (Cindy Fisher / S&S)

CAMP FOSTER, Okinawa &#8212; Typhoon Ewiniar unleashed gusty winds and rain showers over Okinawa overnight Saturday into Sunday, while a new storm developed well to the southeast of the island, strengthening into a tropical depression.

Meanwhile, it appeared Osan and Kunsan Air Bases in South Korea would be spared Ewiniar&#8217;s wrath. The Joint Typhoon Warning Center projected that the fourth storm of the northwest Pacific&#8217;s tropical cyclone season would move north into the Yellow Sea and skirt the Korean peninsula farther west than originally forecast.

The storm should move rapidly north and lose strength as it approaches the Yellow Sea and cooler sea-surface temperatures in and around China, Japan and Korea, Reece said.

Ewiniar initially was forecast to make landfall on Korea&#8217;s southwest coast but the latest JTWC forecast instead has the storm passing well west of Osan, Kunsan and Seoul, making landfall near the North Korea-China border about 3 a.m. Tuesday.

JTWC forecasts call for Ewiniar to be downgraded to a tropical storm overnight Sunday into Monday as it heads for the Yellow Sea.

General information was being passed to Osan and Kunsan bases through the commander&#8217;s access channel and American Forces Network TV and radio, Osan spokesman Tech Sgt. Michael O&#8217;Connor stated in a news release given to Stars and Stripes on Saturday.

Well to Okinawa&#8217;s southeast, an as-yet-unnamed tropical depression began gathering strength and moving away from Guam, where it began forming Friday.