Okinawa drumming up excitement for Eisa 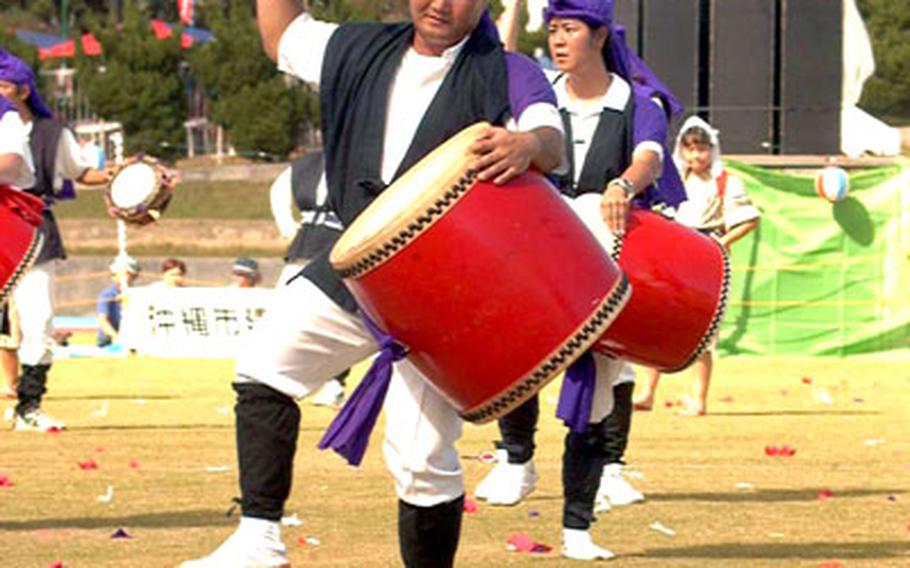 Americans and other foreign nationals engage in 2001’s annual All-Island Eisa Festival in Okinawa City as part of the Okinawa International Exchange Club. The 2005 festival will take place this weekend. (S&S photo)

OKINAWA CITY &#8212; The island&#8217;s Eisa season ends with a bang next weekend with the 50th Annual All-Island Eisa Festival at Koza Stadium, near Kadena Air Base.

If recent years are any measure, more than 250,000 people will attend the three-day event packed with food, fun and music. And if your throat becomes dry from the excitement and semi-tropical summer heat, the Koza Orion Beer Fest will be going on at adjacent fair grounds.

Eisa is an Okinawa ceremonial dance featuring drums of all shapes, sizes and deafening volumes that originally was performed to soothe the souls of the islanders&#8217; ancestors during the summer obon season. The dance evolved from a shaman&#8217;s rite to send the spirits back to the otherworld to a joyous celebration.

The festival also marks the end of summer.

Dancers wear brightly colored costumes and high-step, leap and twirl athletically to the beat of the drums, shouts, whistles and the chords of the sanshin, the traditional Okinawan three-stringed banjo. Although Eisa festivals are held throughout the prefecture during summer, the Okinawa City event features Eisa groups from all over the island, including an international team made up of Americans, Chinese, Brazilians and Argentinians.

The Orion Beer Festival, in the park next to the stadium, will be open from 4 p.m. to 9:30 p.m. Saturday and Sunday and feature various musical groups, and food and beverage vendors.

About 90 Americans, mainland Japanese and other foreign nationals will participate as members of the Okinawa International Exchange Club. This year about 35 Americans, most of them part of the military community, are on the team.

&#8220;Many Americans decided to join in the team after they were attracted by the sound of drums,&#8221; said Peter Ku, who&#8217;s been volunteer coordinator of the club&#8217;s Eisa team for 14 years. Team members have been practicing four nights a week since July, he said.