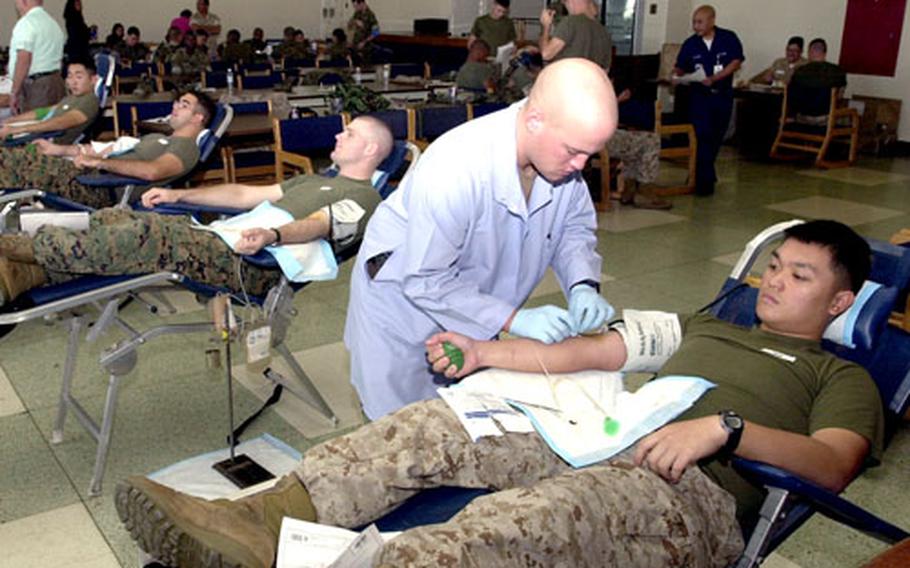 The Armed Forces Blood Bank Center soon will hold blood drives — like this one on Camp Kinser in October — in Guam, South Korea and mainland Japan. (Fred Zimmerman / S&S)

CAMP LESTER, Okinawa &#8212; The Armed Forces Blood Bank Center on Okinawa is taking its show on the road and hoping to get a big audience of donors.

She said the center typically relies on troops and family members on Okinawa to stock its shelves and hasn&#8217;t held an off-island drive for almost a year.

Areas the blood bank teams are slated to visit also receive blood from the center, Parmer said, so people donating will be helping their own communities.

Capt. Jerome Vinluan, the center&#8217;s deputy director, said traveling to the areas for the drives makes for good business.

In South Korea, they will visit Osan Air Base and Kunsan Air Base. Guam donors can roll up their sleeves at Andersen Air Force Base and Naval Base Guam.

While dates at specific installations have yet to be set, Parmer said drives in South Korea, from Sept. 19-23; and in Guam, sometime during September.

She said deferrals hurt donations: Anyone who goes to Iraq, Afghanistan, or helped during the tsunami relief in South Asia automatically is ineligible to donate blood for one year.

Those who received smallpox vaccinations are barred from giving blood for several weeks and tattoos and body piercings also can temporarily remove potential donors from the list.

With the moving season hitting high gear, Parmer said, the center is entering what has historically been its most difficult time of the year. To boost collections, it&#8217;s holding twice-weekly drives at the Joint Reception Center on Camp Foster, gathering about 25 to 30 units a week.

During the off-island collection drives, the center will remain open for donations on Camp Lester from 8 a.m. to 2 p.m. Monday through Friday.

On mainland Japan, the teams will take blood donations at: