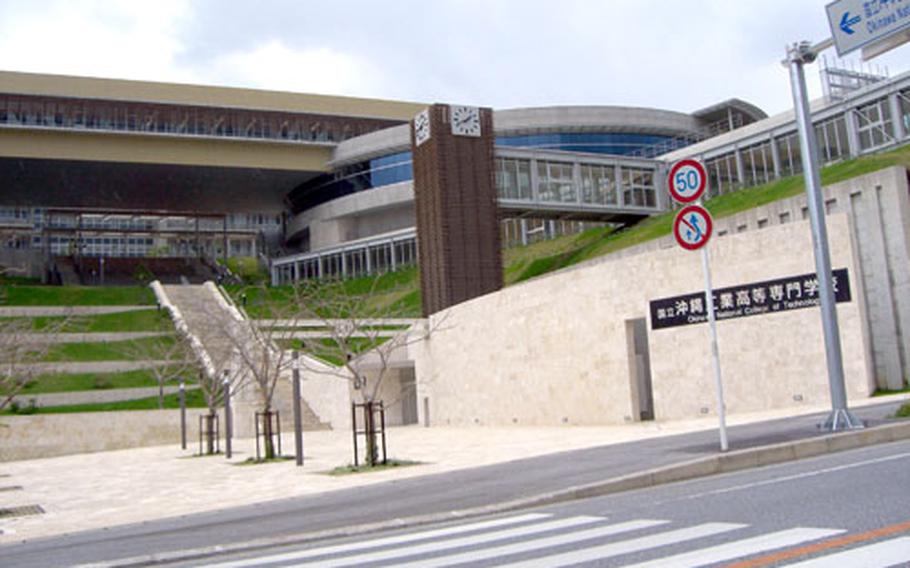 The Okinawa National College of Technology in Henoko was built as part of an economic incentive package Japan provided northern Okinawa after an agreement was reached to build an offshore airport to replace Marine Corps Air Station Futenma. (Chiyomi Sumida / S&S)

HENOKO, Okinawa &#8212; Unlike in some Japanese communities, residents of Henoko are not opposing a plan to realign U.S. troops in Japan that could bring thousands more Marines to their community.

Not as long as Tokyo pays them a nice chunk of change, anyway.

The residents of this sleepy seaside district, part of the city of Nago, are resigned that the U.S.-Japan plan will move Marine Corps air operations from MCAS Futenma in urban Okinawa to neighboring Camp Schwab.

So, as long as it&#8217;s coming, the village board decided to ask Tokyo for $1.5 million for each family that would be affected by the additional airport noise. They also want $20,000 per family annually once the air station is operational.

The Henoko Community Administration Committee decided to ask for the money on Monday, said Futoshi Kohagura, treasurer for the Henoko District Office.

He said the request to the Defense Facilities Administration Agency was made &#8220;to protect our residents.&#8221;

Nago Mayor Yoshikazu Shimabukuro has signed an agreement accepting the new airport plan. But Kohagura said his community has issued 22 conditions for its acceptance of the airport, including the family payments. Other demands are to restrict nighttime aircraft operations, avoid flights over local communities and have Tokyo pay for improvements to the area&#8217;s infrastructure.

The airport plan has brought much anxiety to the rural community, said Kyoko Nishikawa, secretary for the district office. She said her home is close to one of the proposed flight paths.

Kohagura said most village residents do not consider moving to be an option.

Unlike in other Okinawa communities, Henoko residents approved establishing a base in their midst in 1956. Rent from military land leases is a considerable part of the area&#8217;s income, bringing in about $1.7 million annually, Kohagura said.

Henoko&#8217;s economy steadily improved after the United States and Japan agreed in 2002 to build a new Marine air station offshore. Before that plan was scrapped for the Camp Schwab plan, Tokyo paid for construction of a new technical college, an Internet multimedia center, improved roads and the fishing port.

Japan and the United States missed a March deadline for ironing out the details of how to implement the broad realignment package they agreed on last October. The two major sticking points were getting local acceptance of the Camp Schwab project and the U.S. request for Japan to foot most of the estimated $10 billion bill for moving some 8,000 Marines to Guam from Okinawa.

A meeting of the top U.S. and Japan defense and foreign ministers is scheduled for early May in hopes of completing the details before Prime Minister Junichiro Koizumi&#8217;s trip to the States in June.