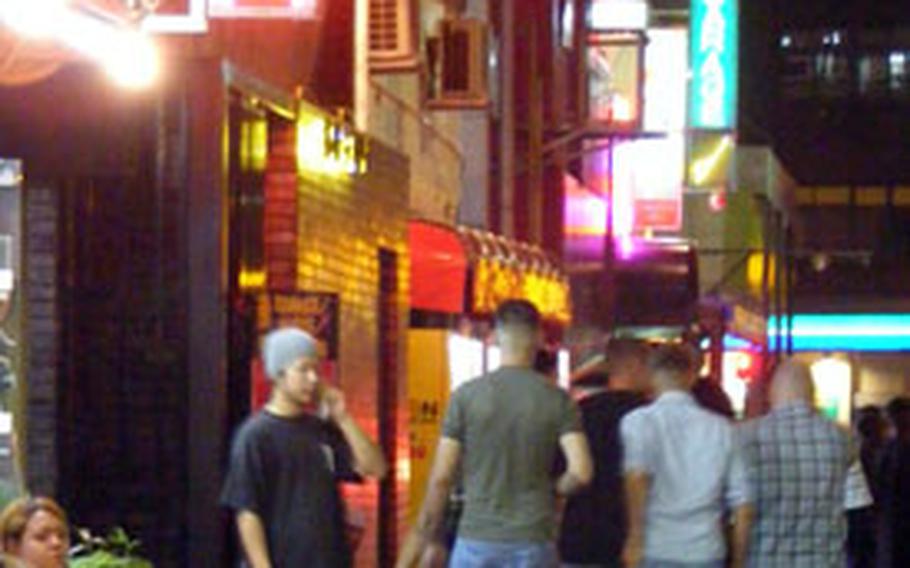 U.S. servicemembers make the rounds of bars on Gate Two Street in Okinawa City on Friday night. It was the first weekend in two months they were allowed to consume alcohol outside U.S. bases. (David Allen / S&S)

U.S. servicemembers make the rounds of bars on Gate Two Street in Okinawa City on Friday night. It was the first weekend in two months they were allowed to consume alcohol outside U.S. bases. (David Allen / S&S) 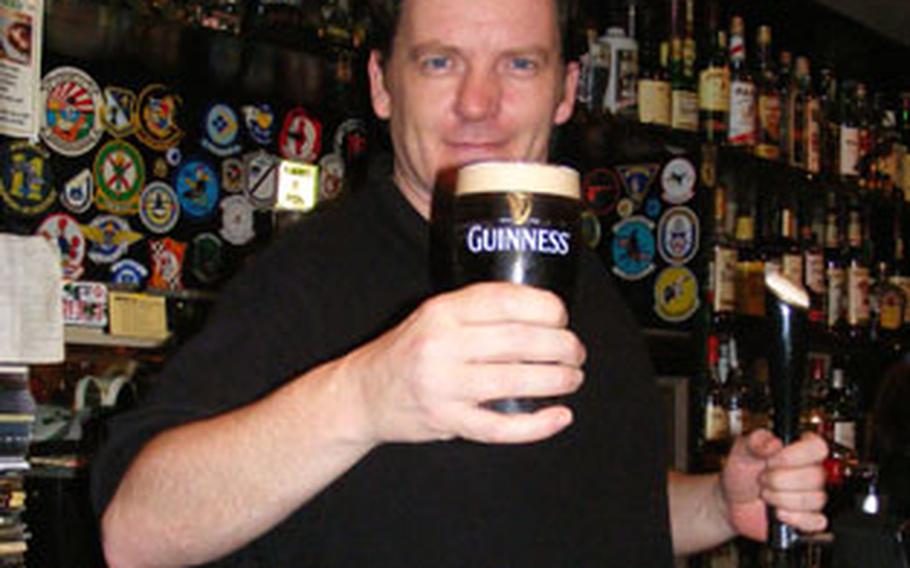 Martin McIntyre, owner of Paddy Mac’s, toasts the lifting of the off-base alcohol ban for servicemembers on Okinawa and Marine bases in mainland Japan. “It’s grand,” he said. “Business is back to normal. (David Allen / S&S) 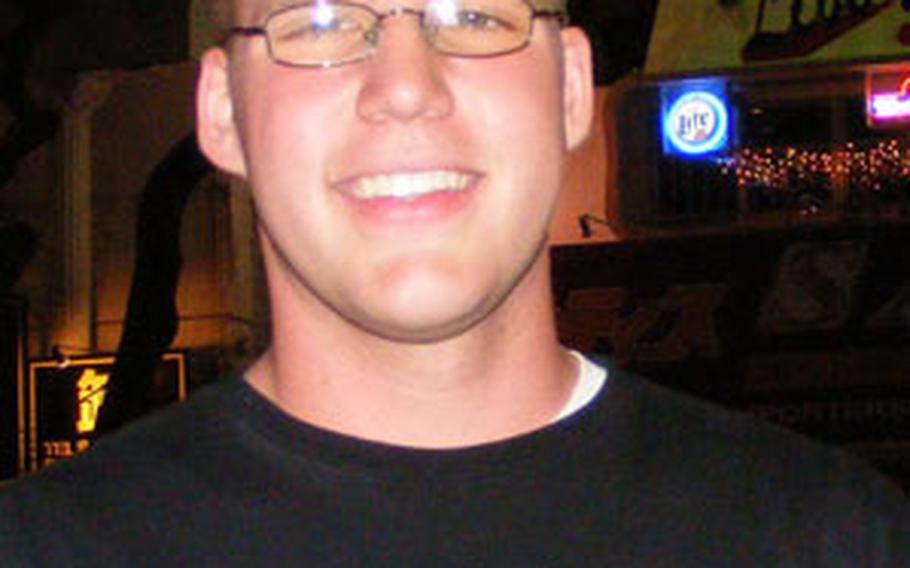 Marine Lance Cpl. Matthew Roenneburg, of the 12th Marine Regiment on Camp Hansen, says is glad the alcohol ban has been lifted on Okinawa. "I can deal with the midnight curfew," he said. “And it’s nice to be able to bar hop again.” (David Allen / S&S) 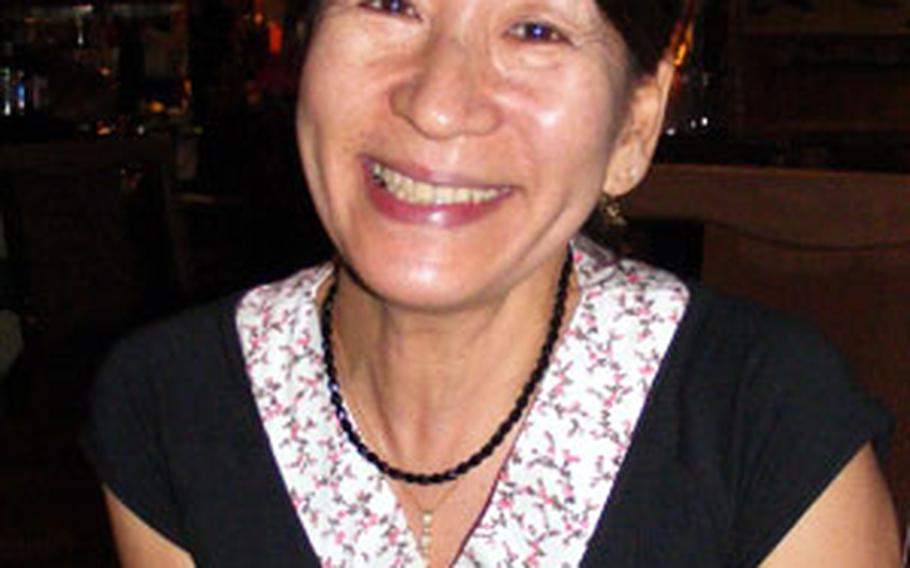 Takae Yokoyama, owner of the Bamboo Café in Okinawa City, says 80 percent of the customers who enjoy her Jamaican jerk chicken specialties are Americans. Recent off-base restrictions caused her business to drop more than 30 percent, she said. (David Allen / S&S)

OKINAWA CITY &mdash; On the first payday Friday after the off-base ban on alcohol consumption was lifted, the Okinawa City entertainment district was hopping.

But the bar scene wasn&rsquo;t quite as busy as it was two months ago, before a series of highly publicized offenses and criminal allegations brought a crackdown on the off-base activities of Americans connected with the U.S. military.

While some popular clubs were crowded Friday night, others barely managed to cover the costs of remaining open. A bouncer at the Dragon, a bar on Gate Two Street, said he had only five customers as of 10 p.m. and that was just two hours before all active-duty servicemembers had to scurry back to their bases.

While the restriction on consuming alcohol out in town was lifted Monday by Marine Lt. Gen. Richard C. Zilmer, the highest ranking general on the island, Cinderella Liberty remains in effect for all ranks.

Other clubs were doing a brisk business. At Paddy Mac&rsquo;s Irish Pub on Park Avenue, the beer-drinking crowd spilled out onto the sidewalk.

Air Force Capt. Trey Sullivan, 35, of the 25th Intelligence Squadron, said the curfew wasn&rsquo;t the welcome-home reception he was looking forward to after returning from Afghanistan last week.

But given the events of the past few months &mdash; two alleged rapes and a series of alcohol-related incidents &mdash; Sullivan understands that lifting restrictions gradually is a necessary measure to ensure that servicemembers remain responsible and behave.

&ldquo;Midnight&rsquo;s better than nothing, and I hate to say it, but it&rsquo;s a good thing,&rdquo; he said, enjoying a beer in the company of friends outside Paddy Mac&rsquo;s.

A few of Sullivan&rsquo;s friends disagreed.

&ldquo;I&rsquo;m 26 years old. I should be able to stay out past midnight,&rdquo; said Staff Sgt. Jason Sigman, also of the 25th Intelligence Squadron.

Sigman said he, too, understands why the restrictions were imposed but thinks they&rsquo;re too severe. And servicemembers have gotten a bad rap, he said.

&ldquo;It&rsquo;s a few bad apples,&rdquo; Sigman said. &ldquo;I think we&rsquo;re very responsible people. We have the finest professionals in the world. Why can&rsquo;t we trust them (to go) downtown?&rdquo;

Martin McIntyre, owner of Paddy Mac&rsquo;s was busy pouring pints of Guinness, beaming at the standing-room-only crowd in his pub.

&ldquo;It&rsquo;s grand,&rdquo; he said. &ldquo;Business is back to normal. I&rsquo;m happy the curfew&rsquo;s eased and the military can drink out in town again.

&ldquo;I just hope somebody doesn&rsquo;t do something stupid to screw it up again.&rdquo;

The liberty restrictions, which began in February with all Americans on Okinawa and Marine bases on mainland Japan restricted to their bases two weeks, hurt all the businesses catering to Americans, not just the bars.

Takae Yokoyama, owner of the Bamboo Caf&eacute;, said 80 percent of the customers who enjoy her Jamaican jerk chicken specialties are Americans.

&ldquo;It was a terrible time,&rdquo; she said. &ldquo;My business dropped more then 30 percent, and at first nobody came and I was forced to close for a week. It was so quiet. Some businesses closed for good, and everyone kept asking: &lsquo;When are the people coming back?&rsquo;

&ldquo;I feel bad for the soldiers. One told me I would not believe the stress they have. Two months (of restrictions) was too long. Now they act so happy.&rdquo;

On Gate Two Street, loud rock and reggae music blared from the bars that line the street leading to Kadena Air Base. Young servicemembers were in a partying mood, but many dodged the questions and cameras of American and Japanese reporters.

&ldquo;I can deal with the midnight curfew,&rdquo; he said. &ldquo;And it&rsquo;s nice to be able to bar hop again.&rdquo;

Another servicemember said members of his unit had been instructed during recent briefings not to talk to the media or divulge information about themselves.

Reporters, Japanese police and uniformed military courtesy patrols shared the streets with the troops on liberty.

&ldquo;They&rsquo;re taking pictures of the bad things we do,&rdquo; an unidentified young man shouted from outside Club Boston, where a neighborhood watch group had congregated with reporters to begin their patrol.

&ldquo;We cannot expect a return to normalcy yet,&rdquo; said Justine Kinjo, of the watch group. &ldquo;As long as the curfew is not lifted entirely, nothing will change.&rdquo;

He said his two show clubs, which feature live dancers and cater to a crowd that is 80 percent Americans, closed for the past two months.

Tomohiro Toyozato, owner of another show club, said he also closed during the period of restrictions, a financial blow to his business.

&ldquo;It sent a negative image of the city to the Okinawan people and tourists from mainland Japan,&rdquo; he said, adding that his association received many calls from Japanese asking if the area was safe to visit.