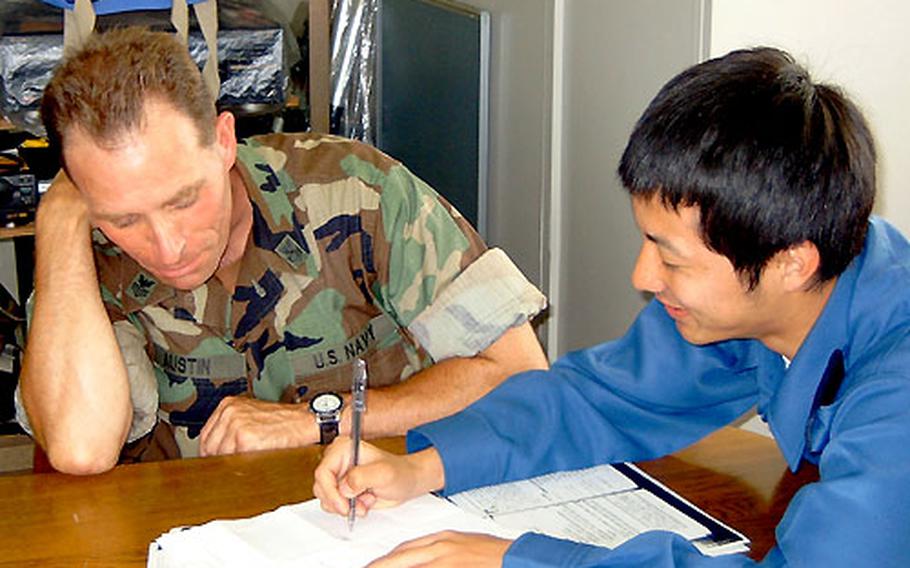 WHITE BEACH, Okinawa &#8212; As cultural exchanges and learning experiences go, the program at White Beach every other Wednesday couldn&#8217;t be more low-key, low-tech or simple.

That may be what has helped make it such a long-running success &#8212; that plus the relatively rare opportunity the program affords participants to get to know colleagues doing the same work, but for another country.

Every other week, Japanese Maritime Self-Defense Force members get together to study English with U.S. Navy volunteers visiting from the base next door. A class started quietly one recent Wednesday afternoon, in an office with a panoramic view of the Pacific Ocean.

&#8220;There are no fixed textbooks for the class, and whoever can make it for the day comes to teach or learn,&#8221; said Robyn Tengan, community relations specialist for the U.S. Navy&#8217;s Commander Fleet Activities, Okinawa. That free arrangement is the key to the 7-year-old volunteer program&#8217;s success, she said.

Lt. j.g. Yuujirou Yoshida, class coordinator for the MSDF side, said that during a typical year, about 100 MSDF members stationed at White Beach take part in the program.

At a corner of a long table, Petty Officer 1st Class Michael Austin, a naval reservist from Seattle, listened intently as MSDF Petty Officer 3rd Class Yuzuru Yoshimura read sentences from a sheet of paper he brought with him.

&#8220;I enjoy the interaction with them, although I still cannot say everything I want to say in English.&#8221;

Barry, on Okinawa for a six-month deployment, said the Japanese sailors &#8220;show interest in American culture.&#8221;

Joining the teaching program is a good way to meet people, said Austin, on Okinawa since January.

Sakuraba, to return to sea duty after his Okinawa tour, said he considers English a must-have skill.

&#8220;Had I been able to communicate better with people I encountered in the countries I visited, my tour would have been far more enriching and memorable.&#8221;

&#8220;I had been sent to Marine Corps Air Station Iwakuni for training,&#8221; he said. &#8220;I missed a great chance to communicate with U.S. servicemembers there because of my lack in ability to speak English. While I am here, I want to come to this class as much as I can.&#8221;

Yoshida said although learning the language was not easy, getting to meet with U.S. sailors &#8220;on a person-to-person basis makes us feel our close ties as navy sailors of the countries we serve.&#8221;