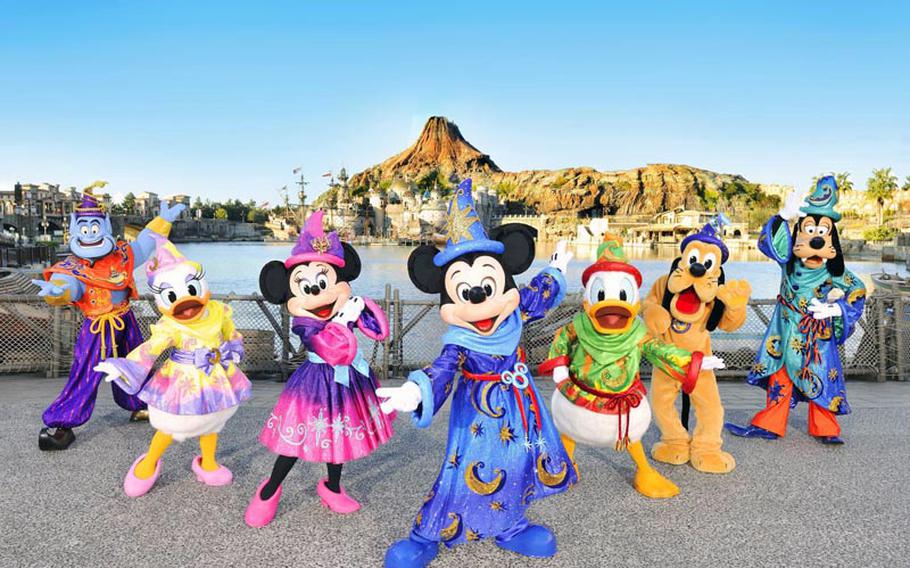 Mickey Mouse and friends rehearse a "Be Magical" dance for the 10th anniversary of Tokyo DisneySea in September 2010. Ginowan city, on Okinawa, wants to develop Marine Corps Air Station Futenma as a Disney resort when U.S. forces relocate and the land returns to Japanese control. (Courtesy of Tokyo Disney Resort)

CAMP FOSTER, Okinawa — From Marines to The Mouse? Ginowan city wants to develop Marine Corps Air Station Futenma as a Disney resort when U.S. forces relocate and the land returns to Japanese control.

Ginowan Mayor Atsushi Sakima met Tuesday with Japan’s Chief Cabinet Secretary Yoshihide Suga to request steps be taken toward ending air operations at the central Okinawan base within five years. He also strongly requested the government’s cooperation in attracting Disney to develop the property. Japan is already home to Disneyland and DisneySea, both in Tokyo.

While there are no concrete plans to bring Disney to Okinawa, Suga appeared receptive to the idea.

“We will work as a bridge to convey Ginoway city’s strong request to the company that operates [Tokyo Disney Resort] and we want to fully cooperate,” Suga told a news conference.

The request signals the start of a new chapter in the saga over relocating the U.S. base. In the past year, the headlines have been dominated by a small but vocal protest movement led by prefectural Gov. Takeshi Onaga, who has been trying to block moving the base elsewhere on Okinawa, but the narrative now seems to be moving toward inevitability.

Construction of a new runway at Camp Schwab in Henoko that will facilitate the relocation continues while the two sides fight in court. An expedited decision is expected in the coming months.

Oriental Land, which operates Disney resorts, said it will consider the idea.

“We will carefully consider it, and no policies have been decided at this time,” it said in a statement.

Sakima and Minister of State for Okinawa and Northern Territories Affairs Aiko Shimajiri visited Oriental Land on Dec. 2, according to a company spokeswoman.

The Japanese government is already supporting a plan by Universal Studios Japan to bring a theme park to the island. No details have been released.

Okinawa is Japan’s poorest prefecture and relies on tourism to survive, officials have said. Protesters claim a disproportionate amount of key real estate is taken up by U.S. military facilities.