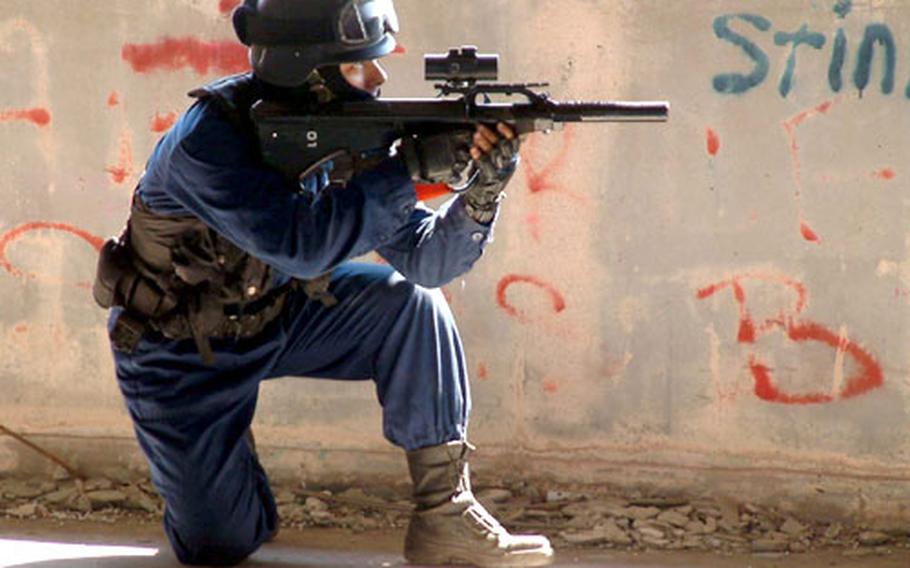 A Japanese war-game player stalks his prey during an outing in the ruins of a hotel on Okinawa. War games with BB guns are popular on Okinawa, but Okinawa City officials are objecting to Americans using a city park for their games. (David Allen / S&S)

They claim young camouflaged Americans shoot at each other with so-called airsoft or BB-guns, scaring people who use the park for more peaceful purposes and creating a risk from errant air-gun pellets.

&#8220;We have received many complaints from residents,&#8221; said Hideo Uehara, Okinawa City planning department director. &#8220;The activity violates our city&#8217;s ordinance which prohibits any dangerous activities in a public park.&#8221;

The use in simulated war games of airsoft guns, many of them lifelike replicas of real weapons, is popular with both Americans and Japanese role players on Okinawa, according to police. The games occur mostly on weekend nights, from 10 p.m. until the early morning hours, Uehara said.

The city has received reports about the games over the past two years. But it wasn&#8217;t until last weekend, when a dozen or so people wearing uniform-type camouflage clothing ambushed each other in Yaeshima Park, that the city decided to take action. The park is near Kadena Air Base&#8217;s Gate 2.

When questioned, the game players identified themselves as Marines and their family members, a city official said. They said they played the games in the park because the air guns are not allowed on U.S. bases. One of the game participants told a city official players had strict safety standards and would halt the game if other people were in the vicinity.

A Marine spokesman said the complaint was being taken seriously by Marine officials.

&#8220;Marine Corps Bases Japan restricts replica handguns and rifles, whether or not they are capable of firing any type projectile,&#8221; he said. &#8220;In addition to having to be registered, these items are prohibited from being carried or displayed in public.&#8221;

&#8220;Military officials responded very positively to our concerns,&#8221; said Uehara, one of the officials who delivered the letter. &#8220;We were told that the military would look into the matter and identify individuals who play the game in the park.&#8221;

A MOFA Okinawa Liaison Office spokesman said MOFA officials would discuss the issue with U.S. military officials and would caution them against such activities in the park.