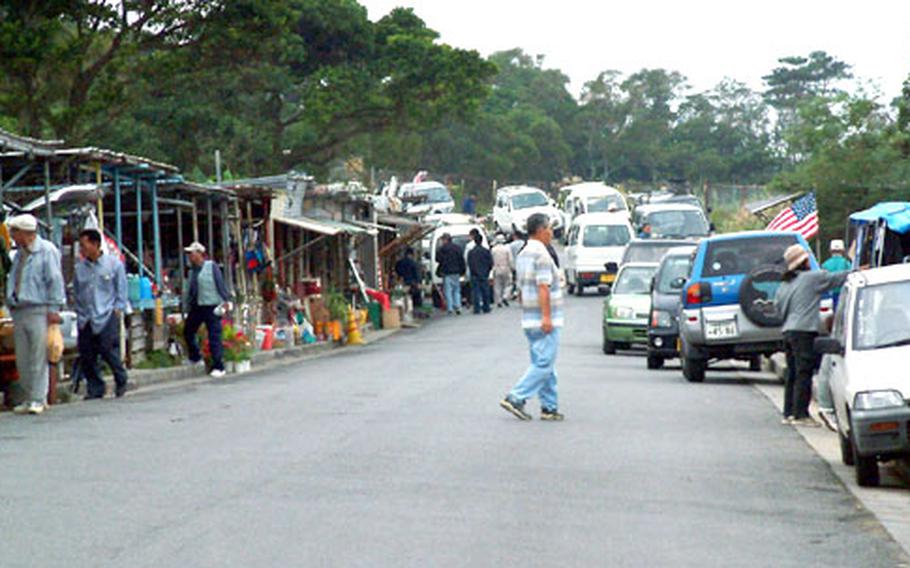 This flea market, on a public access road that cuts through the Kadena Ammunition Storage Area, has operated illegally since the early 1990s. Okinawa City plans to erect a fence to deny the merchants space for their stalls. (David Allen / S&S)

On Jan. 20, the city is to begin construction of a fence that will deny merchants space for their stalls along the half-mile stretch of public access road through the Kadena Ammunition Storage Area.

The illegal flea market, which has operated on weekends since the early 1990s, made headlines in September 2003 following an explosion in a city junkyard that killed a 53-year-old master sergeant in the Japan Air Self-Defense Force.

An investigation found that the victim, Takio Tamura, was killed when a decades-old rocket-propelled grenade he was cleaning for resale at the market exploded. The probe showed Tamura sold military surplus goods, including used ammunition shells, at the flea market.

Okinawa City, which had been warning the merchants for years they were operating illegally, was in the midst of negotiations with the U.S. military, landowners and merchants to fence in the area when the fatal explosion took place.

&#8220;Okinawa City asked the military in 1979 to open the road for access to public facilities, such as the Kurashiki Dam, the city mortuary, and chicken and pig farms,&#8221; he said. &#8220;Through four years of negotiations, the access road was open to public in 1983 on condition that the city would put up fences along the road.

In the meantime, the city started to receive citizens&#8217; complaints in 1992 about weekend traffic congestion. Some motorists said the traffic was so heavy it took them more than an hour to get through the half-mile stretch of road.

&#8220;To respond to the complaints, Okinawa City, the Naha Bureau of the Defense Facilities Administration Agency, the Koza Public Health Center of the prefectural government and the Okinawa City Military Landowners Association started to discuss about the issue in 2001,&#8221; Kuba said. &#8220;After nearly three years&#8217; discussion, we were about to put up fences in 2003. It was then the explosion occurred.

The flea market winds along Route 38 from the entrance of the Air Force&#8217;s Chibana Golf Course to the Southeast Botanical Gardens. At one time there were more than 300 stalls, most of them shoddy structures built from scrap lumber.

Although the property along the road is part of the air base, it has been unused for years and the landowners, who receive rent payments from the DFAA, are allowed to tend small garden plots. Following Tamura&#8217;s death, signs in Japanese and English were posted along the road by the city ordering the merchants to move.

Merchants formed a committee to fight the order and things remained in limbo until last week, when city and Japan defense officials met with the merchants and informed them of their intent to erect the fence.

&#8220;We had a briefing last Wednesday, inviting some people representing the group of people who have flea market business in the area,&#8221; said Kuba.

He said that about 30 people who own shacks and stalls along the road attended the meeting, although the city invited only six representative of the group.

&#8220;We explained to them that the fence work will start Jan. 20, asking for their cooperation and understanding,&#8221; he said.

He said the merchants protested the city&#8217;s move.

He said the merchants requested the city to provide them with an alternative site to continue their business. Their request was turned down.

&#8220;There is no way that the city would support the group of the people who conduct business in an unauthorized area,&#8221; Kuba said.