Okinawa City dump gets work to keep jet-threatening crows out 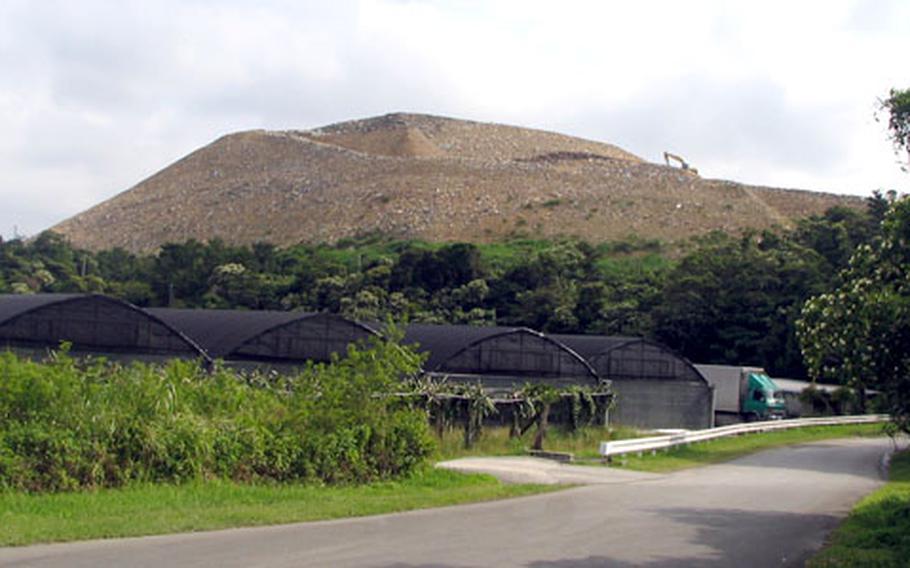 A mountain of trash in Oknawa City poses a hazard to aircraft from nearby Kadena Air Base. The landfill is being covered to eliminate the attraction to crows, and the size of the mound is being reduced. (David Allen / S&S)

A mountain of trash in Oknawa City poses a hazard to aircraft from nearby Kadena Air Base. The landfill is being covered to eliminate the attraction to crows, and the size of the mound is being reduced. (David Allen / S&S) 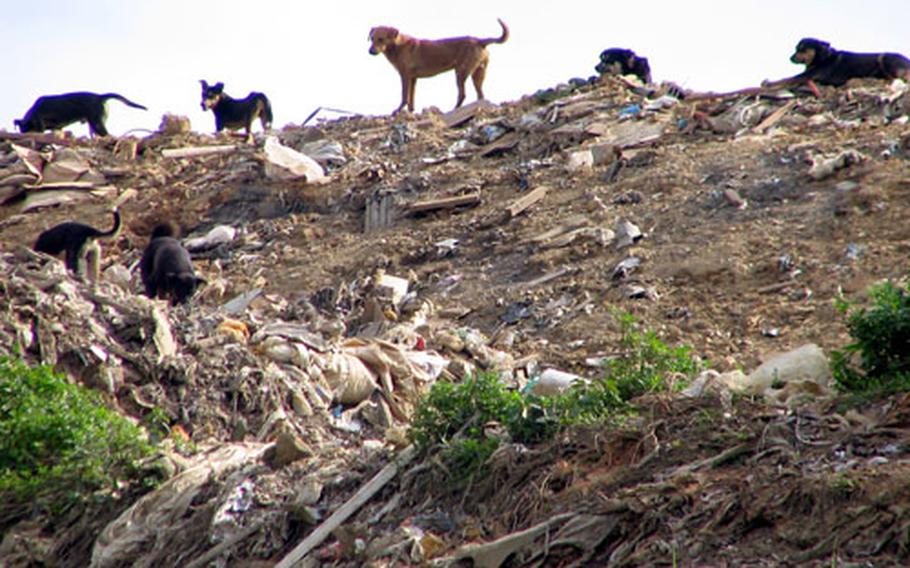 Trash-mound dogs have settled in on the landfill in Okinawa City. (David Allen / S&S)

OKINAWA CITY &#8212; Officials from Japan&#8217;s Defense Facilities Administration Agency and Okinawa city are busy these days talking trash &#8212; specifically, a heap of garbage forming a mini-mountain near Kadena Air Base.

The Air Force says the dump is too high and crows camped out there pose a danger to jets. It filed a protest with the Naha Bureau of the DFAA in February. Earlier this month, the bureau requested that the city make improvements to the trash heap.

The city says it is taking measures to close and compact the trash mountain, ending the free meals for the crows.

It was the crows that bugged the Air Force the most, according to officials. Large flocks using the area as an all-hours buffet posed a threat if they got in the way of jet engine intakes.

Another problem was the height of the trash mountain.

&#8220;The request from the military stated that the mound, which is approaching its height limit, interferes with flight operations at the air base,&#8221; a Naha DFAA spokesman said Tuesday.

&#8220;The Air Force submitted a memo requesting assistance from Naha DFAB to alleviate the concerns with the landfill sites,&#8221; said 18th Wing spokesman Capt. Gerardo D. Gonzalez. There are several landfills in the area, and Gonzalez noted that progress is being made to rectify the problems.

&#8220;One of the landfills has been partially covered, thereby decreasing the amount of birds in the area,&#8221; he said in a written response to a query. &#8220;The contractor is working on compacting the garbage to reduce the problem further. There is another landfill, on which the contractor is also working to reduce the height &#8230; by approximately 100 feet.&#8221;

On a lower trash heap, a pack of wild dogs has taken up residence. Okinawa city supervises that landfill, which is for general waste &#8212; about 90 percent collected from U.S. military bases.

&#8220;After the complaint was made in February, the contractor who owned (that) landfill covered the mountain with dirt,&#8221; said Yoshihide Kuwae, chief of the city&#8217;s environmental protection division. &#8220;As a result, crows disappeared and the bird problem has been solved. The landfill stopped accepting new trash on March 31 after it became filled to capacity.&#8221;

The towering garbage heap nearby is supervised by the Okinawa prefectural government and is used for industrial waste.

&#8220;When the DFAA contacted us in May with the military&#8217;s concern, we instructed the contractor to improve the situation,&#8221; said Kazuhiro Tarama of the prefecture&#8217;s waste management division.

The president of the company that operates the landfills says they are on top of the problem.

&#8220;We are adding an additional landfill in June, next to the landfill we recently closed because it was full,&#8221; said Yuji Minami, president of Kurashiki Kankyo Co. Ltd. &#8220;Also, we are excavating the existing landfill to compact the trash.&#8221;

He said a high-tech furnace capable of burning almost anything fed into it, including rocks, should be in operation by 2010.