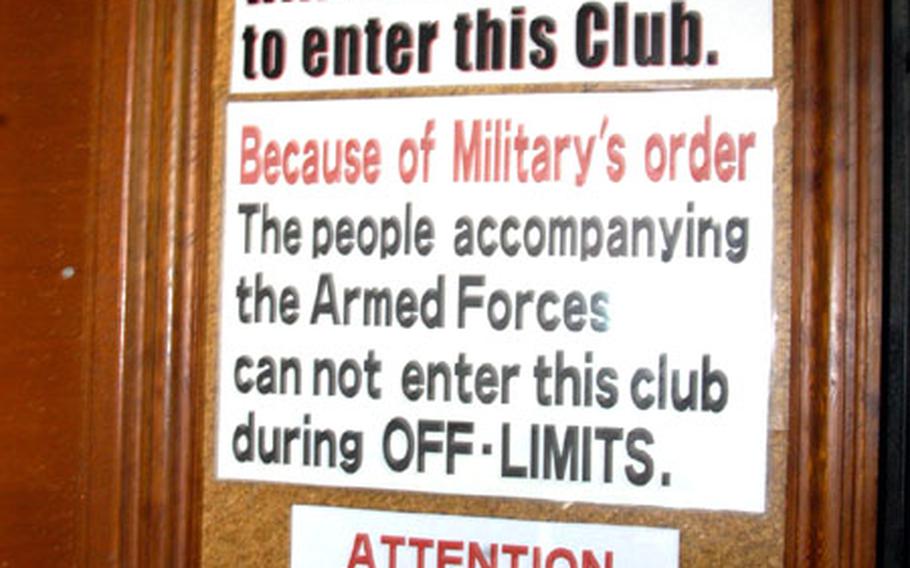 A sign at the entrance to the Club Else announces it is off limits to all Status of Forces Agreement personnel on Okinawa. Club owner Noboru Inafuku, who also owns two other bars in the Ueichi district of Okinawa City that were declared off limits April 9, says the ruling by the Armed Forces Disciplinary Cointrol Board unfairly singled him out. No other clubs were declared off limits. (Mark Rankin / S&S)

A sign at the entrance to the Club Else announces it is off limits to all Status of Forces Agreement personnel on Okinawa. Club owner Noboru Inafuku, who also owns two other bars in the Ueichi district of Okinawa City that were declared off limits April 9, says the ruling by the Armed Forces Disciplinary Cointrol Board unfairly singled him out. No other clubs were declared off limits. (Mark Rankin / S&S) 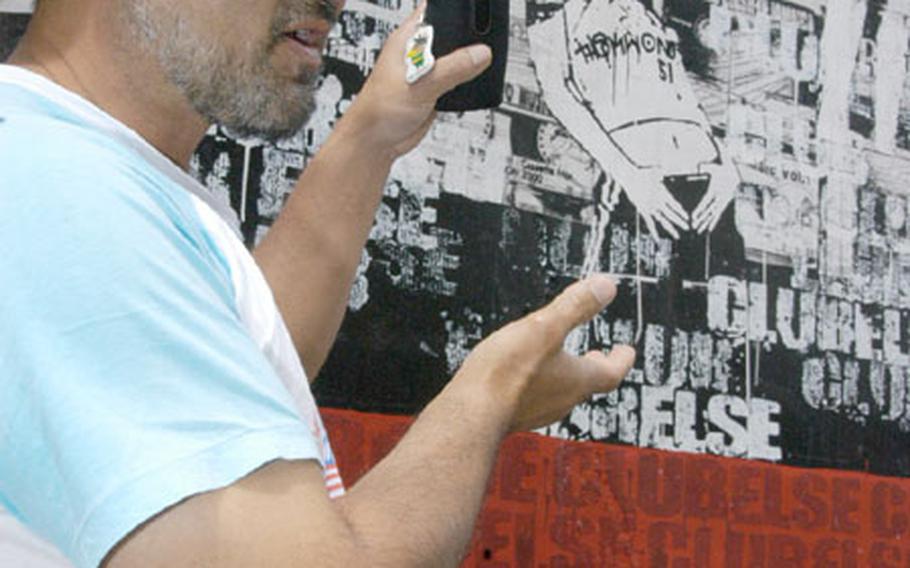 Bar owner Noboru Inafuku, shown here outside the Club Else, says he is going broke now that his three Okinawa City bars have been declared off limits by the Armed Forces Disciplinary Control Board in April. (Mark Rankin / S&S)

OKINAWA CITY &#8212; An owner of three city bars placed off limits by the U.S. military April 9 says he got the message: If he doesn&#8217;t comply with requests made by the Armed Forces Disciplinary Board, his clubs will die.

&#8220;It has been nearly three weeks since the restrictions became effective,&#8221; said Noboru Inafuku, executive director of Piccadilly Planning, which owns six businesses in Okinawa City. It&#8217;s a popular liberty area for U.S. servicemen on Okinawa.

As he spoke, Inafuku opened a briefcase and shuffled letters and documents that have gone back and forth between him and military officials over the past three months. On the bar sat two video game controllers. Inafuku explained that his employees use them to kill time while waiting for the customers who are not allowed inside.

Earlier this year, the Armed Forces Disciplinary Board, which has representatives from each service, became alarmed about fights inside and outside five bars in the Uechi district. The board also was concerned about poor lighting inside and outside the clubs, the employment of status of forces agreement personnel, sale of alcohol to minors and military courtesy patrols being prevented from entering the clubs.

U.S. Army Col. Gerry B. Turnbow, chief of the disciplinary board, said two of the clubs worked to bring themselves into compliance with the board&#8217;s requests.

Inafuku did not, he said.

On April 12 Inafuku appealed the decision, stating changes were made to comply.

&#8220;We improved everything that the military pointed out,&#8221; Inafuku said, noting that he even went &#8220;one step further&#8221; and added street lighting outside the clubs even though the Okinawa City municipal government is preparing to add lighting some time in the future.

He said he and the military share the same concerns about behavior inside the clubs.

&#8220;Every time when trouble is about to start, our employees would promptly step in between the two and urge them to leave, escorting them outside the club,&#8221; he said. &#8220;Maintaining peace and pleasant atmosphere in the club is our profound desire.&#8221;

He said that his clubs also request ID card and body checks prior to entry.

&#8220;Often, we have found knives in their pockets,&#8221; Inafuku said. &#8220;It is one of the preventive measures to secure safety of our guests and employees. Also, people tend to become more aggressive when they have weapon.&#8221;

Inafuku said the Manhattan has been in business for 30 years, the Pyramid for 19.

&#8220;We have been cooperating with the military and local police all these years,&#8221; he said. &#8220;We did everything we could to comply with the requirements and we are committed to do everything to make our club a safe place.&#8221;

Having any business declared off-limits by the military is bad for business, said a spokesman for the Okinawa City Chamber of Commerce, which raised concerns that such a ban would give tourists a negative image of the city.

On April 22, the disciplinary control board informed Inafuku that it would thoroughly investigate the changes he made to his clubs and &#8220;evaluate the corrective actions taken and determine whether the off-limits restrictions should remain in place.&#8221;

Until then, however, his clubs remain off limits.