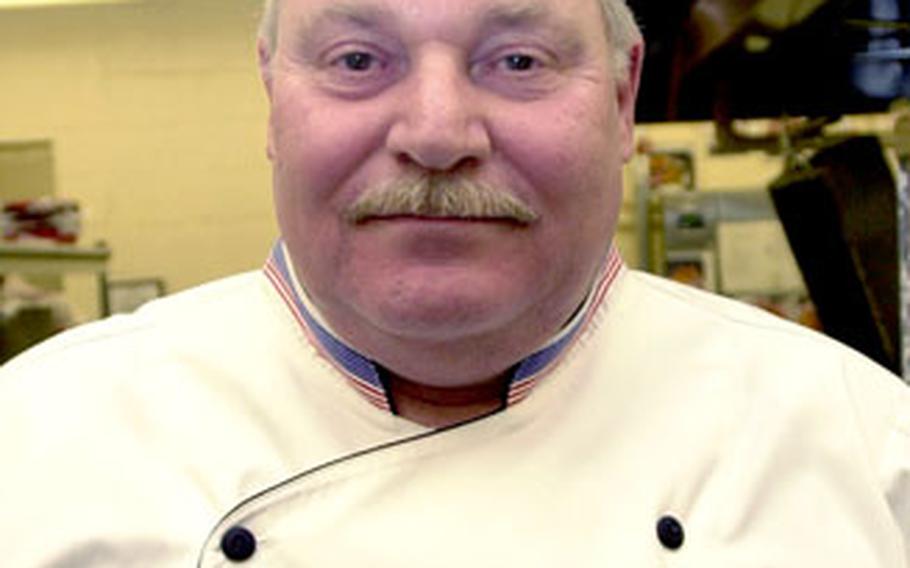 Wolfgang Geckeler, Marine Corps Community Services’ corporate chef, was recently notified he was accepted into The Honorable Order of the Golden Toque, an organization that limits membership to 115 worldwide. (Fred Zimmerman / S&S)

CAMP FOSTER, Okinawa &#8212; The Honorable Order of the Golden Toque, while it may sound like a secret society straight out of a Harry Potter movie, actually is an exclusive group of international chefs. And one of Marine Corps Community Services&#8217; own is among its newest members.

He is one of five to be inducted in a September ceremony at Johnson & Wales University in Charlotte, N.C.

To become a Golden Toque member, Geckeler said, a chef must have at least 20 years experience and be nominated by three current members.

The certified executive chef also belongs to the American Culinary Foundation and the American Academy of Chefs &#8212; the chef&#8217;s honor society.

He said entry into the Golden Toque is based on contributions to the profession. His include mentoring young chefs and contributing to local communities.

He organized the stand-downs with the Department of Veterans Affairs. At each one, a tent city would be set up and homeless veterans would be fed, offered showers and haircuts and clothed. They also were given medical checkups and supplies and registered in the DVA system.

Geckeler worked in casinos for more than 20 years before coming to Okinawa. Some of his duties with MCCS here include coordinating menus for all the clubs, writing recipes, checking food quality and working with supplies and budgets. He also coordinates all menus at Marine Corps birthday balls on the island and numerous festivals on Marine camps.