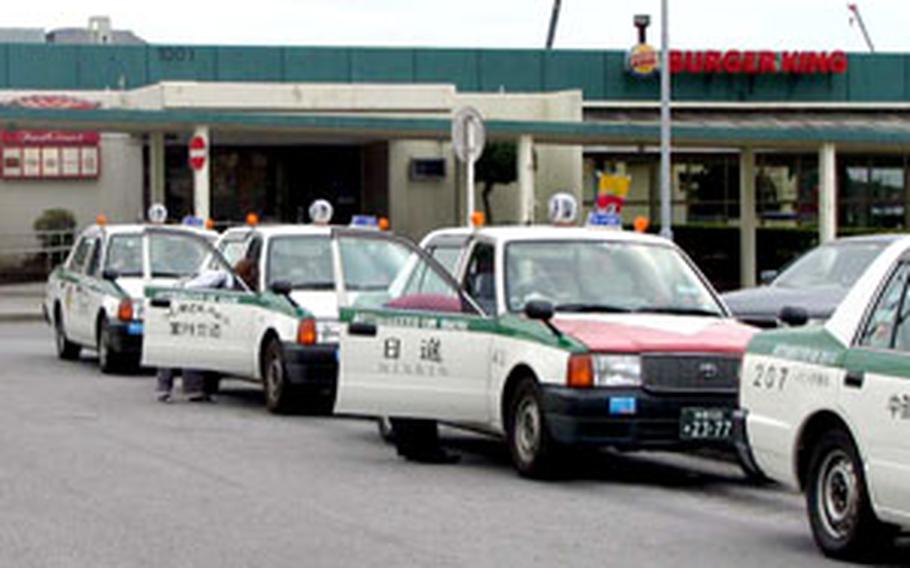 Okinawa cab drivers clean up their cars while waiting for fares at the base exchange complex on Camp Foster. Most drivers say working on the U.S. bases is safer than working at night in Okinawa’s off-base entertainment districts. (David Allen / S&S)

Okinawa cab drivers clean up their cars while waiting for fares at the base exchange complex on Camp Foster. Most drivers say working on the U.S. bases is safer than working at night in Okinawa’s off-base entertainment districts. (David Allen / S&S) “I have not had any horrifying or dangerous experiences while at work,” said Camp Foster cabbie Yukio Kawamitsu, 56. (David Allen / S&S)

In the United States, the U.S. Bureau of Labor Statistics regularly ranks driving a taxi among the 10 most dangerous jobs. Taxi drivers are 60 times more likely than other workers to be killed on the job, the U.S. Department of Labor reports. And a University of California study showed 37 percent of taxi drivers in the state&#8217;s major metropolitan areas have been victims of robberies and other abuse.

It&#8217;s no different on Okinawa, police and cabbies say. But while reports of robberies by U.S. servicemembers may grab local headlines, cabbies say they have more problems with their countrymen, whether combative drunks or thieves. Most drivers interviewed recently by Stars and Stripes said they feel safer on the bases.

&#8220;If I work at night, I have to expect lots of scary situations,&#8221; said Yukio Kawamitsu, 56, as he waited for a fare recently on Camp Foster. &#8220;Japanese passengers, too, sometimes give us a hard time because many of them are drunk.

&#8220;In fact, when dealing with drunken customers, Americans are much easier because we cannot communicate fully. Some Japanese customers get really fussy, giving us hard time.&#8221;

The only recent murder of an Okinawa cabbie was in December when a 25-year-old tourist from Tokyo stabbed a 64-year-old driver to death with a kitchen knife and stole about $100.

After two robberies on Camp Foster in January, the association urged its members to speed the installation of the safety panels, he said. About half of the cabs on Okinawa now have them, he said.

Most cabs also have devices to indicate emergencies, such as a roof light that can be set to flash when trouble occurs inside the taxi.

The association gives drivers safety manuals. &#8220;The manual teaches them not to resist,&#8221; he said. &#8220;They are also trained to remember anything that could [help] identify the attackers later, such as their physical features.&#8221;

Most drivers interviewed said they preferred working on bases.

Okinawa police gave their own safety manuals to taxi companies in 2004 after a series of 2003 taxi robberies in mainland Japan, said Yoshio Oya, an Okinawa prefectural police official.

&#8220;The manual urges company owners to familiarize their drivers with the emergency procedures, to conduct safety drills and to report to the police any incidents, regardless of the degree of seriousness,&#8221; Oya said.

The department had no statistics available on crimes committed against cabbies.