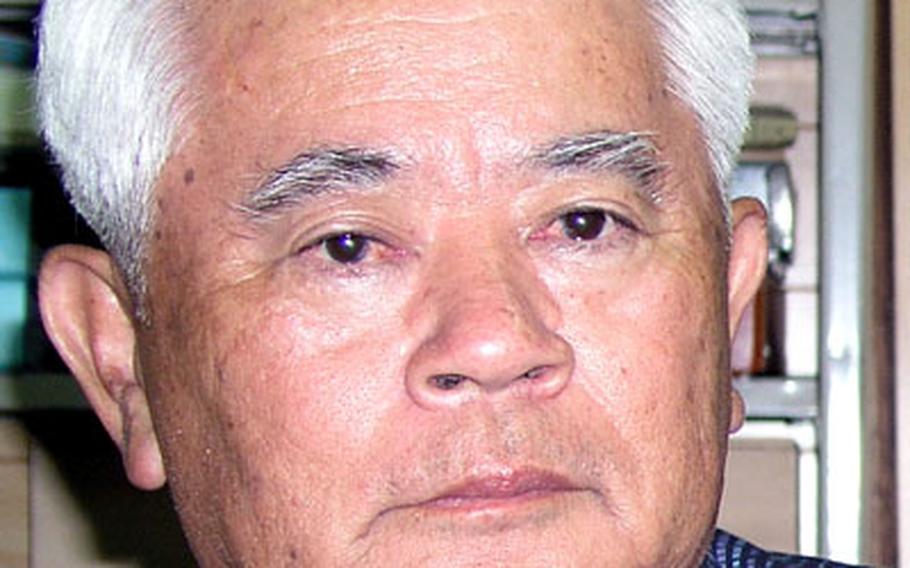 Shoshin Nagamine, president of the Japan-U.S. Housing Association, is concerned by the impact a reduction in the Marine Corps presence on Okinawa could have on the local economy. (Chiyomi Sumida / S&S)

GINOWAN, Okinawa &#8212; The proposed transfer of 7,000 Marines from Okinawa and the eventual closure of several U.S. military bases there could hurt the economy of the island, already Japan&#8217;s poorest prefecture, experts say.

Okinawa also has the lowest per capita income in the country, according to national statistics.

On Oct. 29, the U.S. and Japan agreed on an interim report on the realignment of U.S. troops that calls for building a new airport in northern Okinawa to replace Marine Corps Air Station Futenma and moving 7,000 troops assigned to the III Marine Expeditionary Force off the island.

Tomikawa&#8217;s school is adjacent to MCAS Futenma. In August 2004, a Marine CH-53D Sea Stallion helicopter crashed on the campus. Although the crew survived and no civilian injuries were reported, the incident underscored calls to move Marine bases from Okinawa&#8217;s urban areas.

&#8220;I witnessed firsthand the adverse impact of the military presence,&#8221; Tomikawa said. &#8220;It would be easy to abandon oneself to anger and demand the base be closed. But we have to be cautious against such emotionally charged arguments.

&#8220;What we need now is to know where Okinawa&#8217;s economy stands and how much impact the military presence gives to the local economy,&#8221; he said. &#8220;It is alarming that not many people give serious thought to the economic contributions the military makes on Okinawa.&#8221;

One group that has thought long and hard about that subject is the housing agencies that serve the American servicemembers.

&#8220;There are about 35 housing agencies for military families on Okinawa with 140 to 150 employees,&#8221; said Yasuhiko Okae, chairman of the Okinawa Real Estate Federation and former president of the Japan-U.S. Housing Association. The annual income from renting about 3,000 homes to Americans on Okinawa is estimated to be about 5 billion yen ($42 million), he said.

Base jobs, coveted by Okinawans, also could be affected. Every May and November more than 10,000 applications are taken for about 450 jobs that open up on the bases, said Okinawa Garrison Forces Labor Union Vice Chairman Takeo Taira.

Tomikawa said most post-return base reuse plans are missing one important element.

&#8220;There are plans drawn on paper, showing where business zones will be or where roads will be built,&#8221; he said. &#8220;But what is lacking are reutilization plans based on solid market mechanism to secure capital.&#8221;

And if the bases are downsized, so too will be the economic support provided by the national government, he said.

According to data released by the prefectural government, Okinawa received $7.56 billion from the national coffer in 2002, the latest figure available. In addition, Tokyo paid $1.62 billion on the U.S. bases, an income second only to the amount the tourism industry brings in &#8212; $2.952 billion.

A lot of what Tokyo gives Okinawa is associated with the military presence, Tomikawa said.