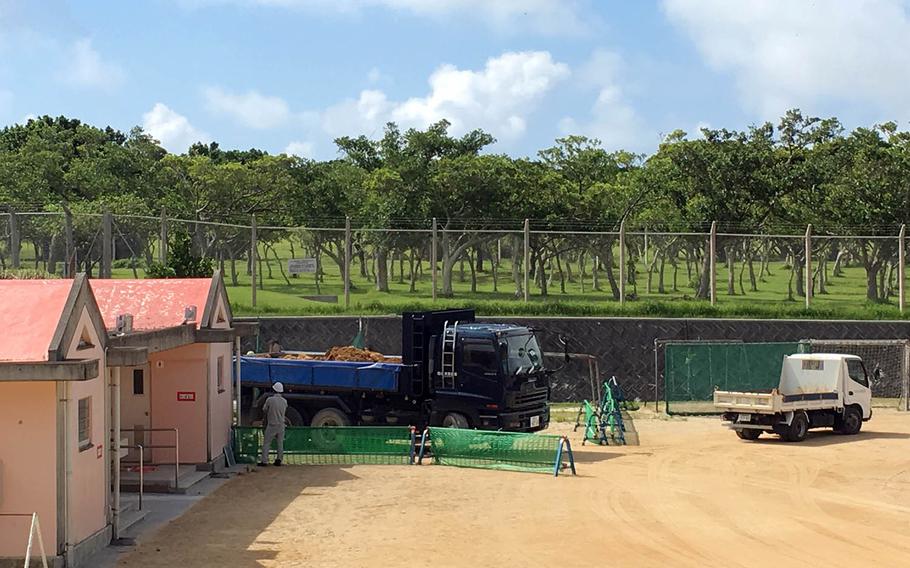 CAMP FOSTER, Okinawa — The Okinawa government is building shelters to protect schoolchildren from falling aircraft parts near an American military base in Japan’s southernmost prefecture.

“There will be four emergency shelters — two at playgrounds and two at other locations,” said Masashi Katsuren, an Okinawa Defense Bureau spokesman, on Tuesday.

One of the shelters is now under construction at Futenma Daini Elementary School on the northern side of Marine Corps Air Station Futenma.

In December, a 3-foot-by-3-foot window fell from a Marine CH-53E Super Stallion helicopter onto the school’s playground where dozens of students were taking a physical education class. A boy sustained a minor injury on the back of his hand from a small stone that was sent airborne, but no other injuries or damage were reported.

Earlier that month, a plastic part thought to belong to a U.S. military helicopter was found on the roof of a nearby nursery school.

The elementary school closed its playground until February. Since then, Okinawa Defense Bureau staff have watched for aircraft and ushered children indoors when they spot them nearby. They’ve cleared the playground 25 times so far in July, the spokesman said.

The Okinawa Times newspaper reported 216 evacuations over 28 days in February and March.

The shelters will each be 6 ½ feet tall and cover about 215 square feet, the Defense Bureau spokesman said.

At Futenma Daini Kindergarten, next to the elementary school, kids played outside on Tuesday while builders worked on the shelter.

“We are somewhat relieved that with two shelters in the playground, we can shorten the evacuation time and resume the physical education class quickly,” the elementary school’s vice principal, Kenji Arakawa, told Stars and Stripes.

Parents had asked for the shelters and for more to be built near a swimming pool, he said.

“Construction of the two shelters at the playground is due to finish before students return from summer vacation on September 3,” he said.

“Most of all they feel stress about all the evacuations and cuts to physical education and recess,” he said.