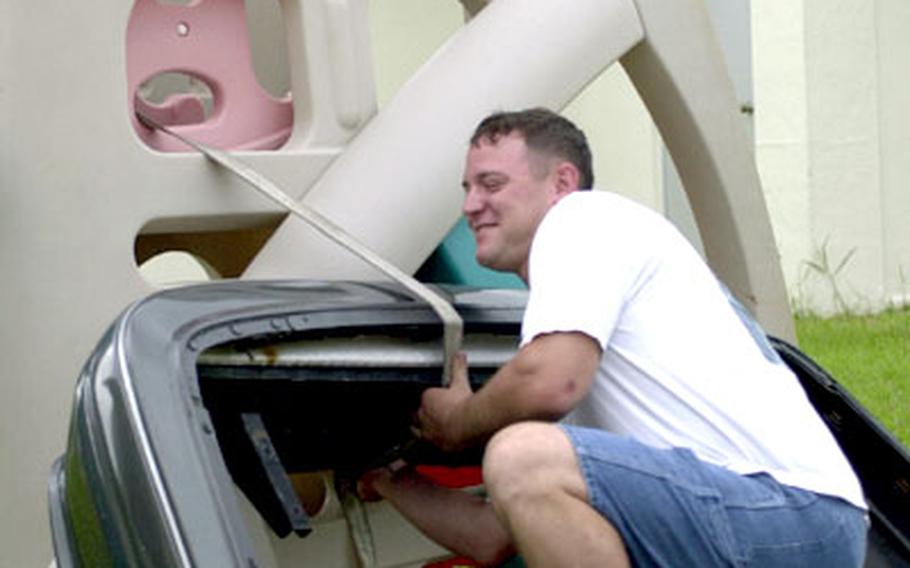 Staff Sgt. Brent Bush, 353d Maintenance, ties down a slide and a car bumper in his yard. (Fred Zimmerman / S&S)

Staff Sgt. Brent Bush, 353d Maintenance, ties down a slide and a car bumper in his yard. (Fred Zimmerman / S&S) With dark skies looming, Air Force crew members prepare a KC-135 from the 909th Air Refueling Squadron from Kadena Air Base for departure Tuesday in preparation for Typhoon Maemi. All aircraft that can&#39;t be put into hangars or bunkers are flown off the island to avoid damage from typhoons. (Fred Zimmerman / S&S) 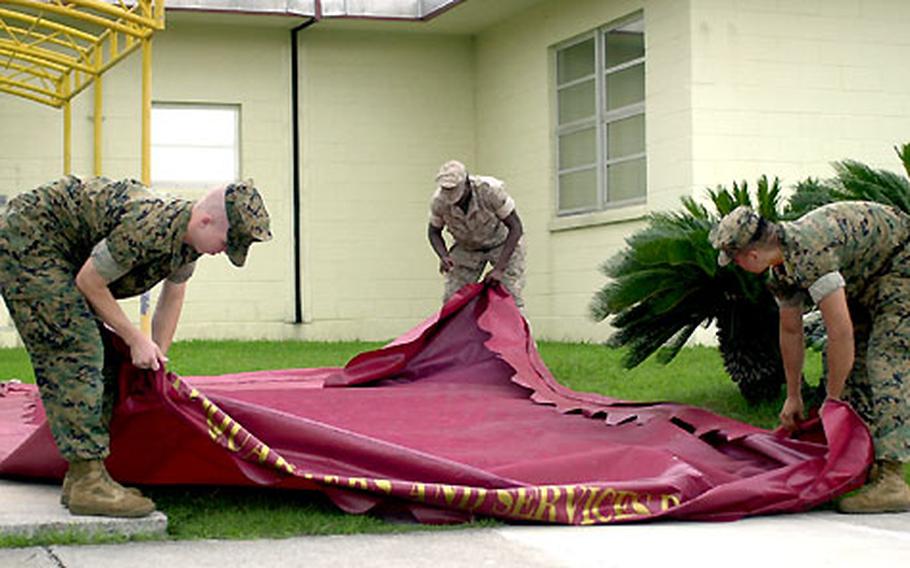 KADENA AIR BASE, Okinawa &#8212; Military bases on Okinawa shut down at 5:30 a.m. Wednesday as Typhoon Maemi approached the island.

And though the winds appeared mild at dawn, the word from the 18th Weather Flight was that it was the calm before the storm.

He said Tropical Cyclone Condition of Readiness 1-Caution was declared once wind gusts of 40 mph were recorded at the airfield.

Under TCCOR 1C, all nonessential personnel are released to their homes, and all schools and businesses are closed. Movement about bases are kept to a minimum with an &#8220;essential vehicles only&#8221; policy in effect.

He predicted island bases would go into recovery mode early Friday, meaning schools and businesses would not reopen until Friday morning.

Planes based at Kadena were flown to other bases in the Pacific to sit out the storm.

Capt. Jason Goodwin, a flight commander with the 909th Air Refueling Squadron, said the squadron&#8217;s 15 planes are reassigned to either Guam or Yokota Air Base and fly regular missions once relocated.

Typhoon Maemi &#8212; named for the Korean cicadas that chirp madly to warn of coming typhoons &#8212; is expected to reach super typhoon strength as it passes the island with sustained winds of 150 mph at its center and gusts clocking at 185 mph.

Miyako is 345 miles southwest of Okinawa.

Although the winds on Okinawa did not seem strong Wednesday morning, Tibbetts cautioned residents not to get complacent.

The Joint Typhoon Warning Center in Hawaii on Wednesday morning showed Typhoon Maemi making a sharp turn to the north-northeast once it passes Okinawa, putting it on a course toward Sasebo Naval Base.

Iwakuni Marine Corps Air Station, also expected to feel the effects of Maemi, was making preparations for the storm.

The center of the storm was forecast to pass 85 miles to the west of Sasebo late Friday with sustained winds of 115 mph and gusts of 160 mph.

It is expected to pass within 15 miles east of Taegu, South Korea, early Saturday.