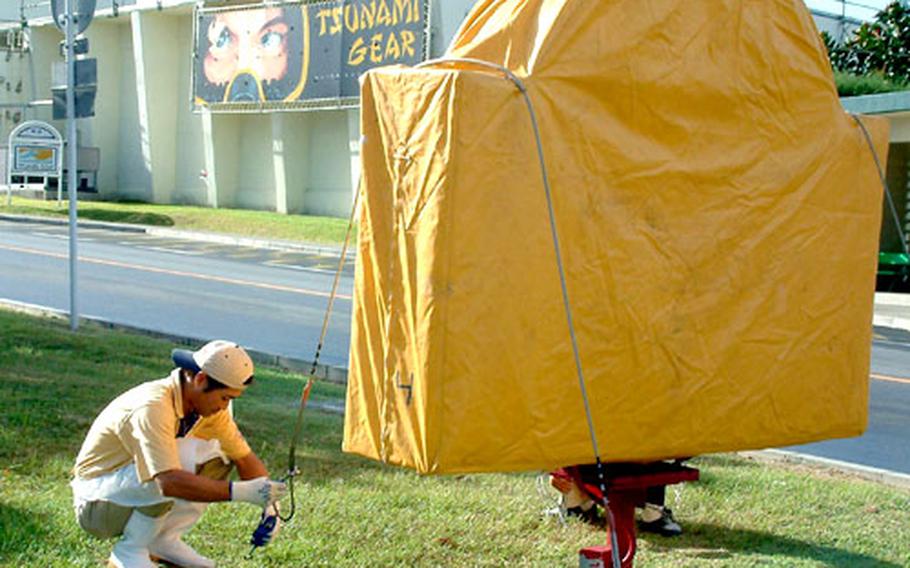 CAMP FOSTER, Okinawa &#8212; Military bases on Okinawa are expected to be locked down Thursday as typhoon Etau approaches.

Base officials expected to close non-essential operations at 6 p.m. Wednesday as they go into Tropical Cyclone Condition of Readiness 1 in preparation for the approach of typhoon Etau.

When upgraded, movement is restricted to only essential personnel and emergency vehicles.

The brunt of the storm is expected to hit Okinawa by 9 a.m. Thursday, with torrential rain and winds gusting to 80.5 mph, according to weather forecasters on the island&#8217;s Kadena Air Base.

Base residents are advised to secure or remove all loose items in yards, officials said.

As of 7:30 a.m. Wednesday, Etau was 422 miles south-southeast of Okinawa and heading northwest at 17 mph, according to the Joint Typhoon Warning Center in Hawaii. Winds at the center of the storm were clocked at 126.5 mph.

Typhoon Etau, named after the Paluan word for "storm cloud," is expected to close to within 75 miles of Kadena Air Base by 9 a.m. Thursday, before turning north.

Kadena Weather Flight officials predict gusts of up to 80.5 mph are likely around 9 a.m. Thursday.

If the typhoon continues on its current forecast track, it is expected to weaken to tropical storm strength before reaching mainland Japan.

The storm is expected to approach to within 82 miles of Camp Fuji by 3 a.m. Saturday, according to the Joint Typhoon Warning Center. Other than bases on Okinawa, that&#8217;s the closest Etau will be to any U.S. base in Japan.