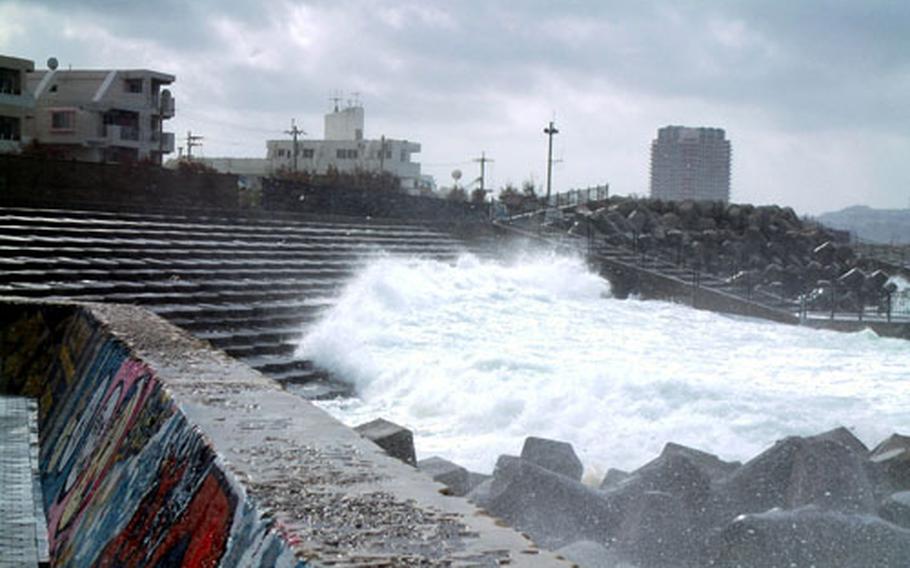 Seas stirred up by Typhoon Meari rush up the steps of the Sunabe Seawall on Okinawa Tuesday morning. (David Allen / S&S)

CAMP FOSTER, Okinawa &#8212; As Okinawa breathed a tentative sigh of relief Tuesday, expecting Typhoon Meari to veer away from the island, Sasebo Naval Base and Kanto Plain bases braced for a dousing as the slow-moving storm weakened but still churned its way northeast.

The typhoon became stationary in part because it lacked a driving force once it passed to the west of Okinawa, DeMars said. &#8220;We believe a cold front now over China and Korea will pull it to the northeast and it will continue on a track toward Kyushu.&#8221;

Sasebo, in southern Japan, remained in TCCOR Tropical Storm Watch on Tuesday afternoon, with forecasters expecting no major threat from the typhoon.

The closest point of approach to the base was predicted to be about 106 miles to the southeast, the forecast stated.

&#8220;Confidence has been upgraded to extremely high that destructive-force winds of 50 knots (about 58 mph) or greater will not occur with passage,&#8221; the forecast stated.

At Iwakuni Marine Corps Air Station in southwestern Honshu, TCCOR Three was issued Tuesday afternoon at 1 p.m., with the typhoon predicted to pass about 112 miles from the base, according to a base spokesman.

The Joint Typhoon Warning Center in Hawaii forecasts Meari to weaken to tropical storm status as it passes over land, passing over the Kanto Plain within 40 miles of Camp Zama, Camp Fuji, Atsugi Naval Air Facility and Yokota Air Base on Friday night, with winds up to 50 mph.

But Tuesday the storm lingered off Okinawa&#8217;s coast for a second straight day, giving students at Department of Defense Dependents Schools an unexpected day off.

Air Force and school officials decided canceling classes would be safer than facing the potential chaos of sending students home early should Typhoon Meari, which means &#8220;echo&#8221; in Korean, mimic its name and reverberate back toward the island.

Typhoon Meari was about 120 miles west of Okinawa on Tuesday morning, with winds of almost 120 mph churning at its center. Winds at Kadena were clocked at 46 mph at 9 a.m.

The island&#8217;s military bases went into a &#8220;Storm Watch&#8221; condition Sunday afternoon as Meari passed some 90 miles to the south, whipping the island with winds gusting to 70 mph.

The bases remained in Storm Watch throughout Tuesday.

In September 2001, Typhoon Nari lingered for eight days, passing over the island as a tropical storm, then making a U-turn, gaining strength and hitting the island again with winds of 113 mph.

The storm then spun in a stationary pattern some 150 miles to the west of Okinawa before turning back and passing over the island for a third time, with winds of 68 mph.

Typhoon Meari appeared anti-climactic by comparison. It finally picked up speed and began moving away from Okinawa by midday Tuesday, heading to the northeast at a leisurely 9 mph. Bases on Okinawa returned to normal conditions of typhoon readiness for this time of the year. The season&#8217;s latest typhoon, DeMars said, &#8220;should be out of our hair.&#8221;