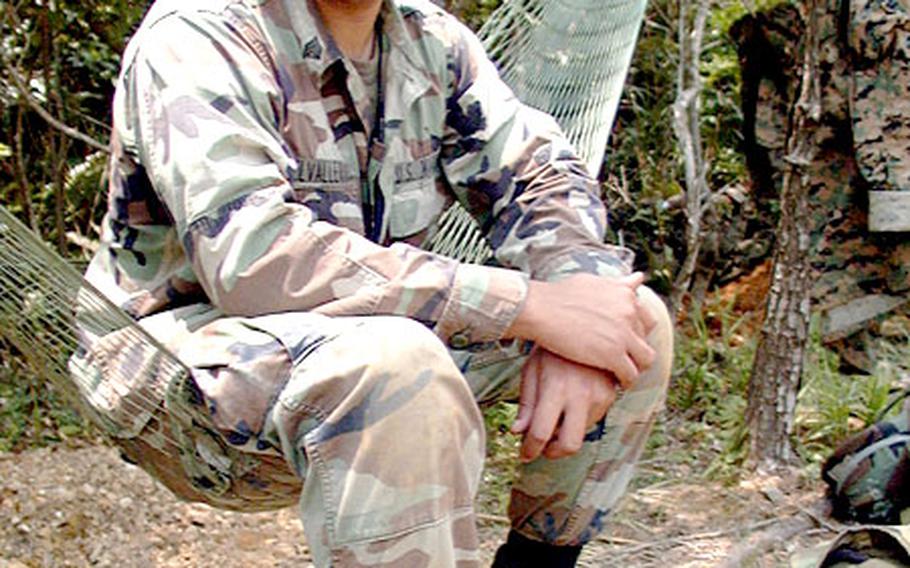 CAMP HANSEN, Okinawa &#8212; By all accounts, Marine Lance Cpl. Thomas A. Blair would have loved to spend the past week in the jungle with his former unit.

Blair, a native of Broken Arrow, Okla., was killed in an ambush near Nasiriyah, Iraq.

According to reports passed back to the unit on Okinawa, Blair and another Marine took fire March 24 on their Avenger, a Humvee with mounted missiles. Blair ran one way while his fellow Marine ran the other. He went missing and was declared dead four days later. The other Marine, who could not be identified, was wounded but survived.

Del Valle knew and worked with Blair for nearly four years on Okinawa and at Marine Corps Air Station Cherry Point, N.C. He said Blair was a good Marine: &#8220;He always came in on time and never gave me lip. You&#8217;d always see him with a two-liter bottle of Mountain Dew and a Marlboro Light.&#8221;

Blair was not a poster Marine. He was busted once, Del Valle said, from corporal back to lance corporal.

But Del Valle trusted him to perform duties on time, including being ready to deploy for war.

Del Valle knows that being a Marine, especially in combat, is job that carries risks. The news still hit him hard.

Marine Cpl. Robert Valdez worked with Blair for nine months on Okinawa before he transferred to North Carolina before deploying to Iraq.

Valdez said the news of Blair&#8217;s death was frustrating &#8212; mostly because he was sitting out the war in Iraq.

But it&#8217;s fitting that because of the circumstances surrounding Blair&#8217;s death, his former unit is out training to ensure Marines are ready for any situation, Valdez said.