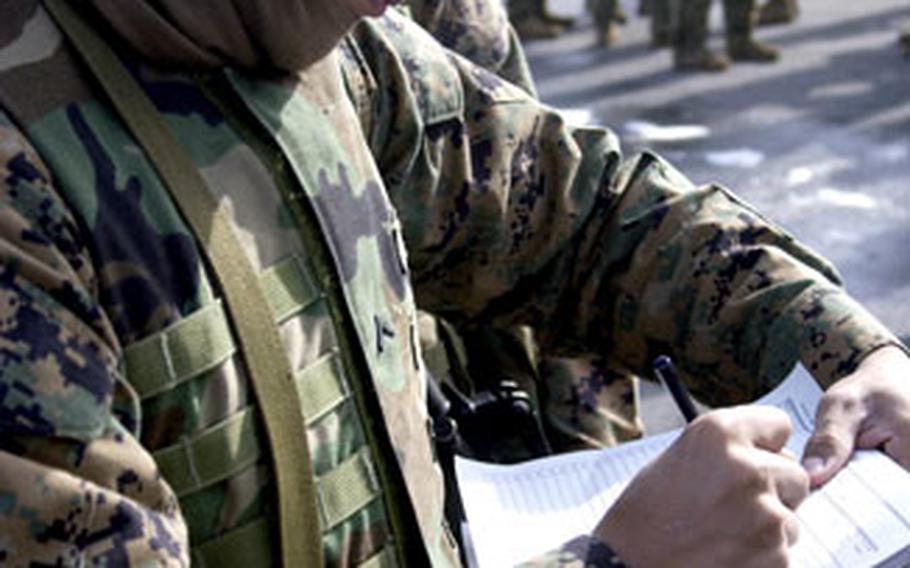 Marine Pfc. Ralph Perez fills out the manifest for the vehicle he will be riding on during convoy operations training Jan. 25 at Camp Fuji. (Terence L. Yancey / U.S. Marine Corps)

Marine Pfc. Ralph Perez fills out the manifest for the vehicle he will be riding on during convoy operations training Jan. 25 at Camp Fuji. (Terence L. Yancey / U.S. Marine Corps) 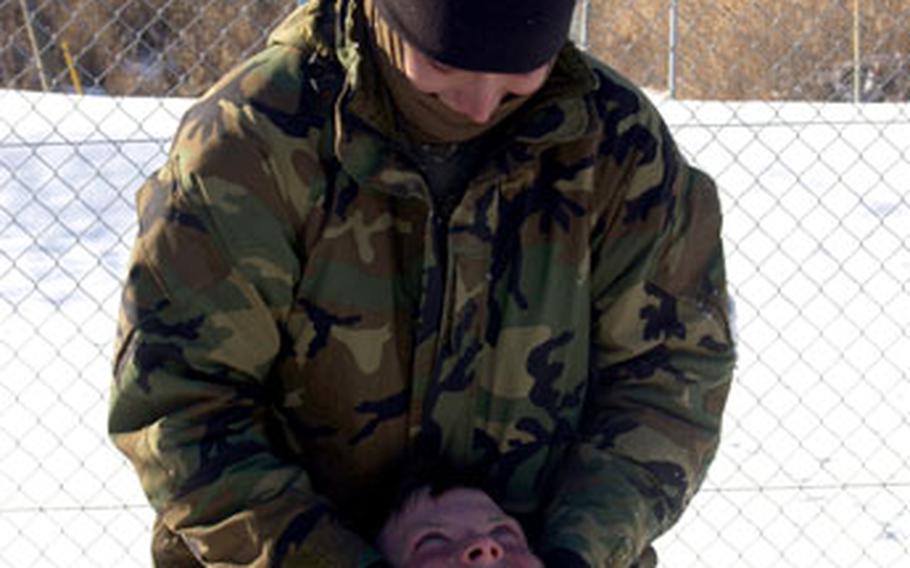 Marine Lance Cpl. Rogelio Ochoa uses a pressure point hold to get Lance Cpl. James Bois, who is acting as an uncooperative prisoner, to stand up after apprehending him during an enemy prisoner-of-war class at Camp Fuji, Japan. (Terence L. Yancey / U.S. Marine Corps)

Throughout the three-week &#8220;Exercise Materiel Warrior&#8221; at Camp Fuji, the Marines and sailors honed their skills to increase their combat readiness to prepare for deployment to Iraq, according to a Marine news release. Marine Corps policy calls for not releasing deployment dates for troops prior to deployment.

They traded mild Okinawa weather for snow and temperatures that dropped to the teens at night and barely hit the mid-40s at midday.

The tight training schedule, cold weather and being away from Okinawa increased the difficulty and stress level of the training, according to a Marine news release.

&#8220;Being here at Camp Fuji is the opposite of being in Okinawa,&#8221; said Lance Cpl. Omari Livingston, an auto mechanic with the 3rd MRB. &#8220;Things are harder to do in the snow, but motivation remains high because everyone is out here to train so we all can come back (from Iraq) alive.&#8221;

Along with convoy operations through Camp Fuji&#8217;s ranges, participants trained in advanced marksmanship, first aid and identifying and reacting to improvised explosive devices &#8212; perhaps the greatest danger to troops serving in Iraq.

They also took part in training on handling enemy prisoners of war, maneuvering while firing and convoy structure and function, according to the news release.

On the training&#8217;s final day, the sailors and Marines were confronted with a variety of &#8220;real-world&#8221; tactical convoy scenarios, according to the news release.