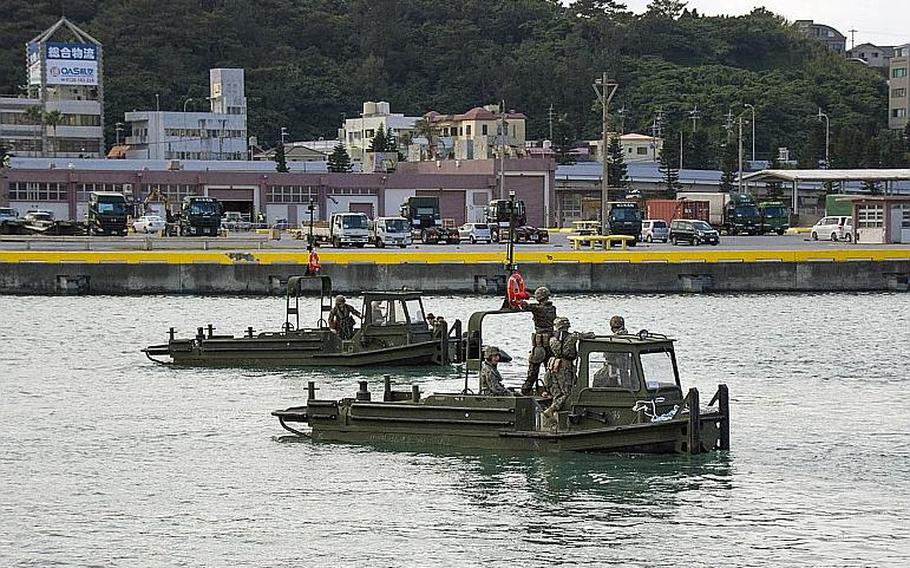 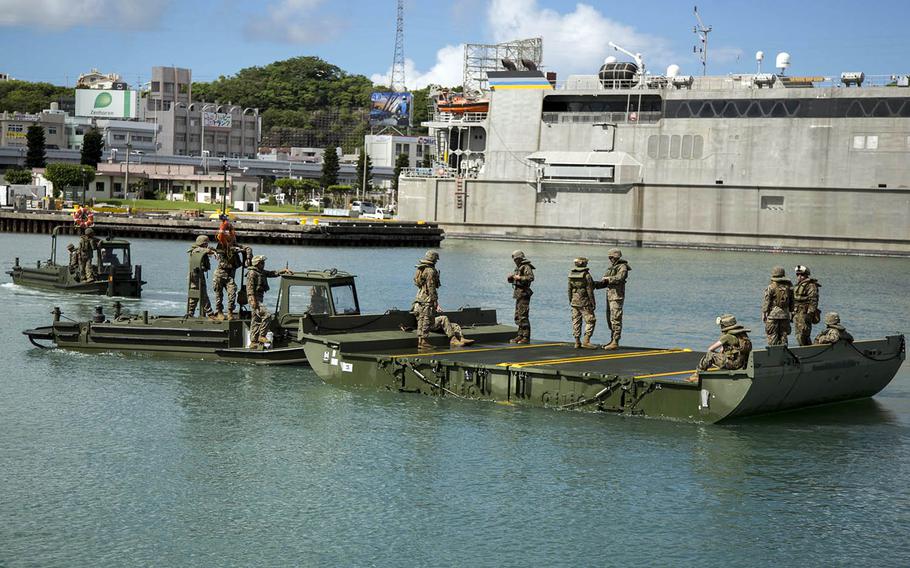 Marines deploy improved ribbon bridges during training in August 2018 at Naha Military Port, Okinawa. An IRB can be used as a bridge or ferry to carry vehicles and equipment across bodies of water. (Jamin Powell/U.S. Marine Corps)

NAHA, Okinawa — Marine combat engineers recently practiced their bridge-building skills at Naha Military Port, demonstrating how to quickly erect a span up to 328 feet long in as little as a half-hour.

With few other options available, the port affords a site for the Marines to maintain their readiness and qualify newly assigned servicemembers, too. The 9th Engineer Support Battalion certified eight more Marines as bridge operators, for a total 13.

For three days, Jan. 29-31, the Marines maneuvered the bridge-erection boat, a small tug-like vessel used to manipulate sections of an improved ribbon bridge into place. Marines also built the bridge during day and night.

Combat engineers must be licensed to deploy the improved ribbon bridge, which can also be used as a raft, to cross bodies of water, or in Marine parlance, a “wet gap obstacle.” The licensing process takes roughly two weeks and includes classroom instruction, a written test and demonstrating basic and advanced maneuvers with the boat.

“It’s been a great opportunity,” said Cpl. Malon Johnson, who took the test to be a licensed operator. “I’m getting familiar with the boats to be able to use them myself, and train other Marines on how to use them.”

When Marine units cannot cross water on foot or in vehicles, the combat engineers jump into action with the improved ribbon bridge to get units and supplies from the near shore to the far shore, Johnson said.

The bridge is a foldable, aluminum system whose individual segments, or bays, can be used as a raft or connected to span opposite shorelines, according to 1st Lt. Daniel Asheim, the improved ribbon bridge platoon commander from 9th Engineer Support Battalion.

Marines during training must properly launch the boat; maneuver at high speed, including combat stops; and manipulate it sideways, also known as crab walking.

Finding a body of water large enough for training is difficult, Asheim said. Naha Military Port is one of the few areas on Okinawa where the combat engineers can put their skills and training into practice.

“I’ve seen them go from almost no knowledge, to practically being able to fully crab walk with the bay on the water,” he said. “This sets the standard and baseline for readiness in our platoon making sure we have qualified operators for this platoon at all times.”