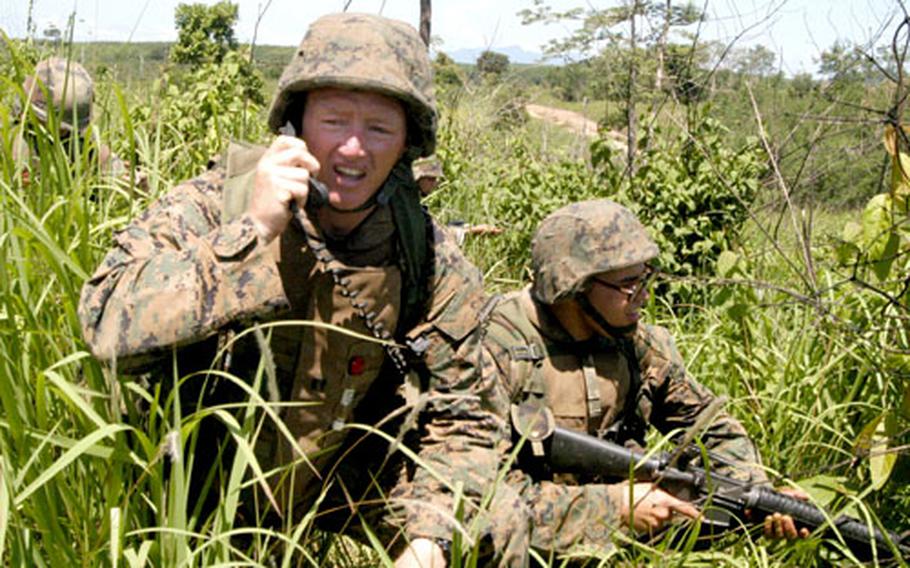 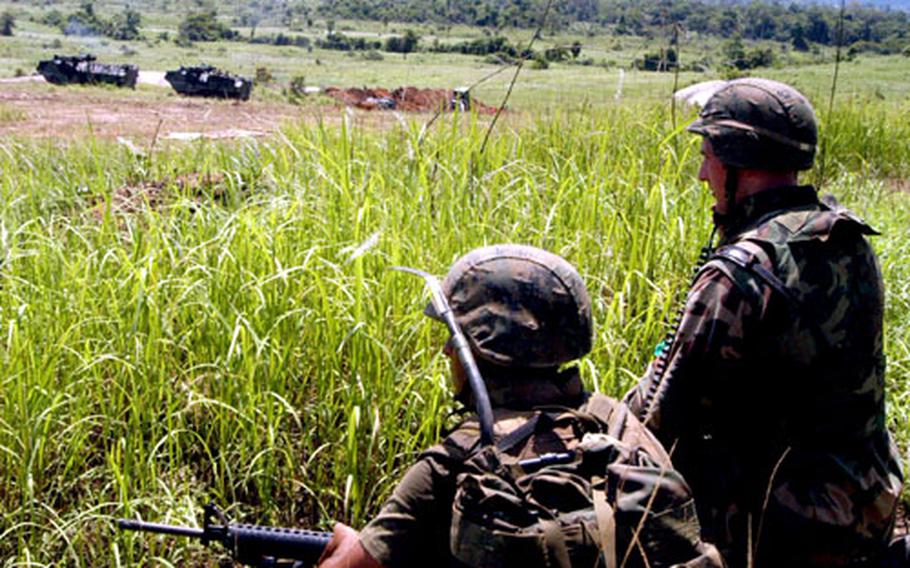 Marine engineers breach one of two obstacles Sunday as part of the Cobra Gold exercise in Thailand. (Seth Robson / S&S) 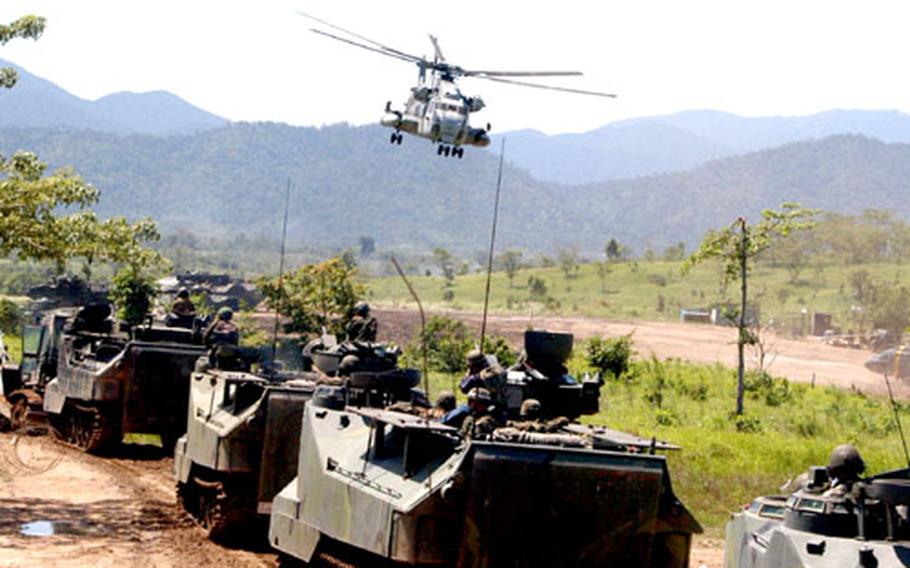 BAHN CHEN KREM, Thailand &#8212; Rockets fired, mortars rained down and machine guns rattled through the southeast Asian jungle in a scene that could have been straight out of the Vietnam War.

Instead, the jungle was in Thailand and the forces involved &#8212; U.S. and Royal Thai Marines &#8212; fought an imaginary enemy in an operation dubbed Ironfist &#8212; part of the Cobra Gold exercise.

Six thousand Marines are in Thailand for Cobra Gold 2004, including 4,000 from the Okinawa-based 3rd Marine Division and 2,000 from Okinawa&#8217;s 31st Marine Expeditionary Unit.

The exercise involved simultaneous breaches of two minefields protected by berms and &#8220;enemy infantry&#8221; dug in on high ground behind them. The operation began with a diversionary attack by U.S. amphibious assault vehicles (AAVs) designed to distract the enemy&#8217;s attention from the mine-clearing operations.

Several AAVs sped across a boggy field to attack the enemy positions.

But the vehicle carrying 1st Lt. Sean Thompson, the AAV platoon commander, and Capt. Garry McCullar, who was to lead the engineers clearing the minefields, got stuck in the swamp. The driver, Lance Cpl. Nicomal Tolliver, revved his engine to no avail as the AAV&#8217;s tracks dug deeper into the mud.

Tolliver dug away dirt from the front of the vehicle while Cpl. Oscar Villegas collected wood to place under the tracks, for them to grip.

Tolliver said it was the first time his vehicle had gotten stuck, but added that he was enjoying the mission.

Thompson was philosophical about the incident.

&#8220;When something unexpected happens it makes it that much more realistic,&#8221; he said.

The squad&#8217;s other AAVs completed the diversionary attack and came back to pull Thompson&#8217;s vehicle out with a tow cable. The next phase of the breach started when Marines fired a TOW rocket at the enemy while Thompson&#8217;s 16 AAVs and another squad of light armored vehicles moved up to lay down suppressive fire with .50-caliber machine guns and MK-19 grenade launchers.

Mortars threw up puffs of smoke as they landed on the enemy positions. The engineers moved up and fired a pair of MICLIC (mine clearing line charge) rockets, shooting lines across the minefields that, in battle, would be strung with C4 explosive.

Then several armored bulldozers began to demolish the berms. When they had cleared gaps, engineers ran through the breach to mark lanes for vehicles with cones.

At that point, 50 Thai marines arrived in three of their own AAVs, assaulted through the breach, dismounted and engaged the enemy under a cloud of purple smoke.

As the battle drew to a close, Thompson sat in his AAV with beads of sweat running down his face. He compared living and fighting in Thailand to being in Vietnam.

&#8220;Being sweaty every day, living in a tent city. That is where the platoon comes together with the camaraderie and the jokes,&#8221; he said.

One of the 3rd Marine Division&#8217;s leaders, Col. George Dallas, said the exercise demonstrated the possibilities of U.S. and Thai forces working together in combat. The last time that happened was during the Vietnam War, he said.

&#8220;We saw a truly interoperable breach and assault under live-fire conditions,&#8221; he said.

Capt. Worapong Tongruang of the Thai 1st Infantry Regiment was particularly interested to see the U.S. Marines&#8217; weapons in action.