Okinawa-based Marines attempt to win hearts and minds through music 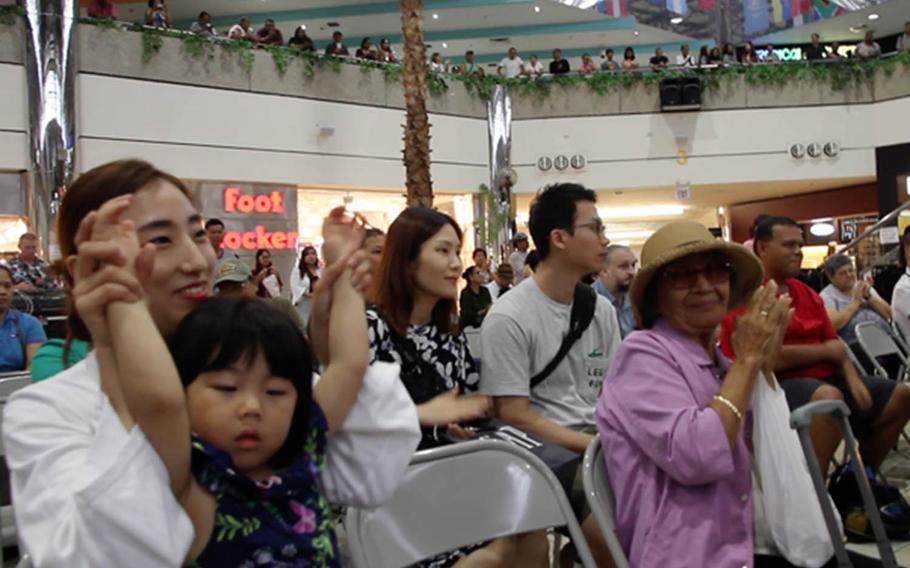 Buy Photo
Adapt and Overfunk, which is made up of members of the III Marine Expeditionary Force Band, perform the Village People classic "Y.M.C.A" last month on Guam. (Matt Burke/Stars and Stripes) 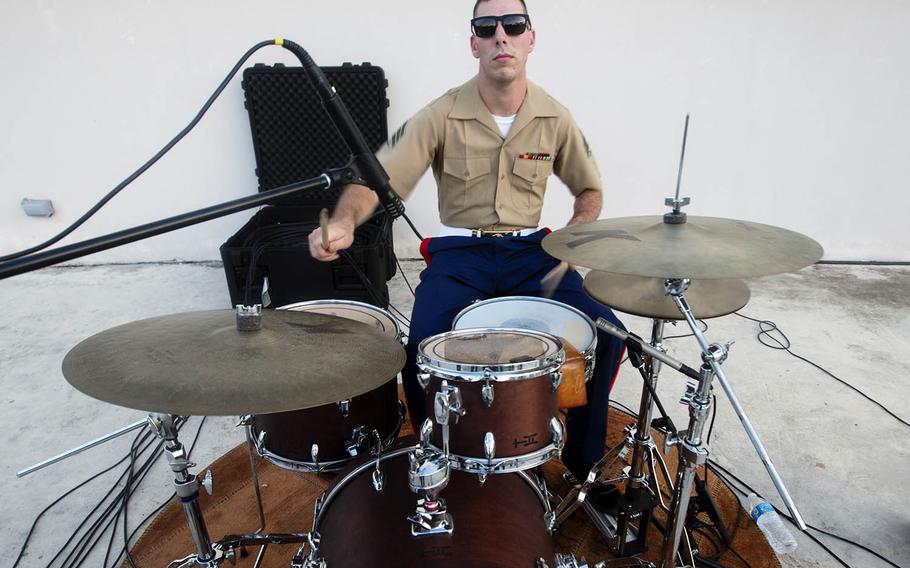 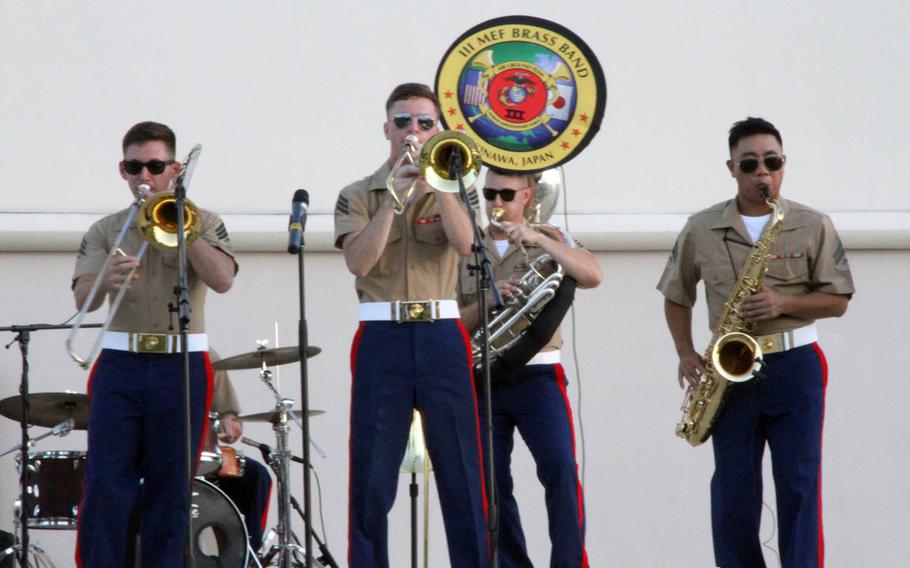 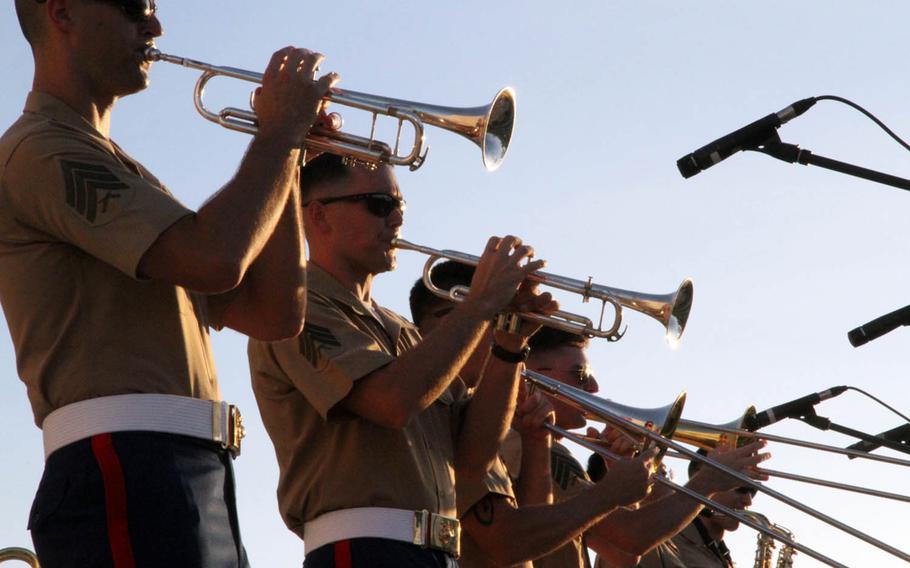 Yes, they must face screaming drill instructors at boot camp, go through combat training and become proficient with a rifle. They must adhere to the service’s rigorous physical and grooming standards, too.

But members of the Marines’ only forward-deployed band get to let their hair down — metaphorically speaking — more than others in the region.

By constant touring and gigging across the Pacific, they attempt to win hearts and minds through the international language of music and by putting a friendly face on American foreign policy.

Last month, they arrived on Guam for a week of gigs ahead of the annual Liberation Day festivities on the tiny Pacific island territory.

“Make as much noise as is humanly possible,” Sgt. Colin Deeter told the crowd with a smile while gripping a microphone onstage July 18 at the Guam Museum.

Trombone in hand and flanked by the rest of a seven-piece brass ensemble, he wore giant aviator-style sunglasses and a freshly pressed dress uniform.

“Jump up and down, scream and shout, clap your hands, stomp your feet … I don’t care; just make a lot of noise.”

The band then broke into song.

“I really love this band,” Deeter later told Stars and Stripes. “It gives us a chance to travel all around the world and really connect with the local populations on a personal level, beyond the uniform. It’s like a soft introduction to the military. We get to go out there and make people smile, laugh, dance, sing. It’s a great time.”

Civilian-acquired skill The III MEF Band has nearly 50 members who play instruments, from guitar and drums to bassoon, flute and trombone. They can perform classical numbers as one large concert band with a conductor, or break up into smaller ensembles that include a rock group called Adapt and Overfunk.

They play their own arrangements and can burst into classical, jazz, rhythm and blues, funk, Latin, rock ‘n’ roll, hip-hop and world music at any time. Their rock setlist includes hits from modern-day artists like Bruno Mars to old favorites like Toto.

They often perform ethnic music from the place they are visiting. In Guam, they played the official territorial anthem. In Japan, they often perform a spiced-up Latin version of “Asadoya Yunta,” a traditional Okinawan folk song. Adapt and Overfunk also has a song that’s sung in French, accompanied by ukulele.

Being a Marine bandsman is unique because it uses a civilian-acquired skill. Many members are college graduates who hold enlisted ranks — except for band director Chief Warrant Officer 2 Andres Navarro.

Some members were professional musicians, and some can play several instruments. They bounce back and forth between the band’s ensembles.

Lance Cpl. Calysta McKinney, 18, a trumpet player who joined the band about three weeks before the Guam trip, was recruited out of high school in Sedalia, Colo. She joined the Marines instead of pursuing music in college or professionally because her parents wanted her to choose another career path.

Sgt. William Thayer, 26, was a music educator when a recruiter tracked him down. After a stint at Camp Pendleton, Calif., he has been with the band for about a year now.

Master Sgt. James Stanley studied in Europe and was playing and teaching music in South Florida when a friend called to tell him he’d joined a Marine band. Intrigued, Stanley auditioned for a position in Hawaii, and has now been in the Marines for 19 years.

“I never actually planned on being in the military at all,” he said. “This is everything that I’ve ever wanted to do.”

Before arriving in the band room, they go through a six-month Marine Corps music school that teaches them about being a military musician, such as drilling, commands and other things expected of them. However, they are required to already have the musical chops.

Each day, they play during scheduled times for the various ensembles they are in at their headquarters on Camp Foster. Spots are filled according to musical talent and proficiency, not by rank or seniority. They also participate in field drills in the morning and other duties.

Bands have also deployed to war zones like Iraq over the years. Stanley said they are professional warfighters who are are capable of throwing down their instruments at any time and joining the fight.

‘We’re people, too’ When the band travels, it is a one-stop shop for all of their musical needs. Members arrive at their destination with their own gear, and also have engineers that make sure their sound is perfect before the first note is played.

The job can be demanding; transporting a truckload of equipment to an overseas location, securing transportation and getting everything safely to the gigs is not easy.

They spend a lot of time away from their loved ones, especially in the busy summer months.

“I couldn’t have asked for a better job,” he said. “I joined the Marine Corps and the band program because I didn’t want to give up performing yet. I’ve traveled, and I’ve been to some of the Marine Corps’ sacred ground, like Belleau Wood, and then we just went to Iwo Jima. I get to go to these places and see what they saw, and I get to honor them in that way.”

During its recent trip to Guam, the band led the popular Liberation Day parade, one of the biggest events in Guam each year. Afterwards, locals inundated the musicians with Chamorro barbecue, water and soft drinks.

Later on, they played a second Guam Museum gig under a cascade of fireworks. Thayer was often front and center as one of the singers in Adapt and Overfunk, singing and dancing until his uniform was soaked through with sweat. Afterward, he and his bandmates were mobbed by the audience, who wanted to pose for pictures and chat.

“I love to come up and talk to people after the fact,” Thayer said. “I love to get them to stay involved in what we’re doing. So, like, we have a Facebook page. I always throw that out there. ‘Hey, if you like that, keep up with what we’re doing and maybe we’ll come around to you again.’ We build so many relationships.”

“We didn’t know there was a band concert today,” she said before the gig. “We’re so happy to see that they’re going to play. I love military bands. So we have to wait. We did not go home yet.”

Deeter said the impact of these connections is felt by the band members as well.

“What we get to do is we get to follow these exercises around and we get to go play for the local people. That’s when we really get to connect with them and win hearts and minds all around the world … we get to go out and have a good time with the people and let them see that we’re people, too.”