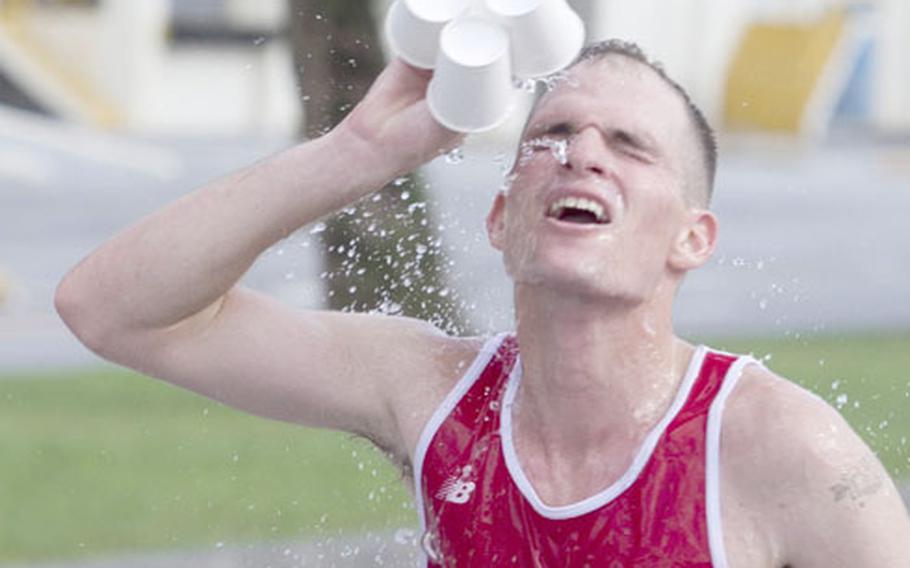 Kunish, left, celebrates the All-Marine running team’s win during an awards ceremony after retaining the Challenge Cup for defeating the British Royal Navy/Marine team at the 33rd Marine Corps Marathon Oct. 26 in Arlington, Va. The Challenge Cup winners are decided by adding the finishing times of the top three runners for each division. (Clinton Firstbrook/Courtesy of the U.S. Marine Corps)

He can run the 3-mile portion of the semi-annual Marine physical fitness test in little more than 14 minutes; 18 minutes earns a perfect score of 100 points.

He&#8217;s also a member of the All Marine Running Team and he was the first in the Corps to cross the finish line of the Marine Corps Marathon in Washington, D.C. in October.

Earning the title of fastest Marine on the 26.2 mile course meant a lot, says Kunish, from Gulf Coast, Fla.

Kunish completed the course in 2 hours, 30 minutes and 12 seconds. He placed 12th overall and was less than 8 minutes behind winner Andrew Dumm, 23, a former Academic All-American at the University of Virginia.

"My legs were done, burnt out, but I still felt good after the race," Kunish says.

In the new year, he hopes to improve his marathon time to about two hours and 24 minutes. "That would make me an elite runner," he says.

It would also put him one step closer to a personal goal &#8212; competing at the 2011 Olympic trials.

Kunish began running in middle school and ran track and field events and cross country for Florida State University, where he earned a degree in international affairs in 2002.

It wasn&#8217;t until he joined the Marine Corps in 2006 and came to Okinawa that he hit his long stride.

"I never thought I was going to run a marathon," he says.

He joined an Okinawan and American running club, strictly as a recreational runner, he says.

With the club, he entered the 2006 Naha Marathon and finished in about two hours and 39 minutes.

He was hooked on distance, and running has it become one of his primary social activities.

Kunish also runs with other recreational running clubs on Okinawa.

Balancing his running lifestyle with his Marine duties "has been the most difficult thing I&#8217;ve ever done in my life," Kunish admits.

Some mornings, he&#8217;s up at 4 a.m. for his personal run before heading to his unit to participate in physical training, then he has his night runs.

"The big thing is that you&#8217;re a Marine first" so getting the running in "can make for some long days," he says.