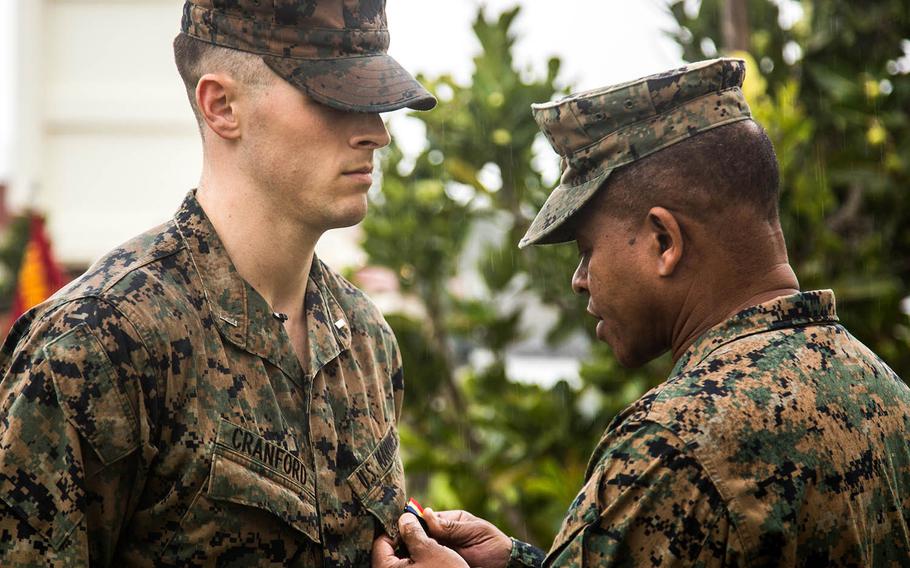 CAMP SCHWAB, Okinawa — It didn’t take long for diver Justin Kinjo to realize he had made a critical mistake after entering the surf last spring near Mermaid Grotto in Manzo-Mo, Okinawa.

Waves smashed over the Okinawan father of two as he made his way out, pushing him down and back toward shore, ripping his regulator out of his mouth and stripping him of everything but his wetsuit and oxygen tank.

At the same time, a rip current tugged at him from underneath the surface, pulling him out and ensuring he was stuck in place. Making matters worse, he got his leg stuck in the coral reef.

The situation was dire. Two of his dive partners found themselves in equally precarious situations.

As panic began to set in, Kinjo raised his hand and called for help in a last-ditch effort to save his life. He said people on shore just stood around and stared.

“I got you,” came the simple, unflinching reply from a tall and thin American who was almost to shore, Kinjo recalled this week. The man then re-entered the treacherous surf and made his way for Kinjo and his party.

Marine 1st Lt. Aaron Cranford, a supply officer from 3rd Reconnaissance Battalion, made repeated trips out into the danger zone. The 26-year-old from Fort Worth, Texas, saved the lives of four people, including Kinjo, that day.

Cranford received the Navy and Marine Corps Medal — the Department of the Navy’s highest award for heroism outside of combat — Monday in a ceremony at Camp Schwab. Kinjo was on hand to thank him.

“I owe him my life man,” Kinjo said after Maj. Gen. Craig Timberlake, 3rd Marine Division commander, pinned the medal on Cranford’s chest. “If it wasn’t for him, all of us would be dead. My kids wouldn’t have been able to enjoy Christmas as a family.”

The sun was shining and the conditions looked inviting when Cranford and several colleagues headed out on the morning of April 23. Mermaid Grotto is a popular diving spot on Okinawa. The interior pools teem with colorful tropical fish and are protected by overarching rock formations. However, the grotto and the surrounding coastline are often dangerous, and claimed the lives of three U.S. servicemembers in October 2016.

The group dove for about 35 minutes, reaching a depth of about 60 feet and had a “really good dive,” said Maj. John Mahler, who was part of the party that day. Cranford – a master diver and by far the most experienced — led the expedition.

“As we were coming back to our entry and exit point, the conditions had changed drastically,” Mahler said. The tide had come in and waves had increased to five or six feet.

Cranford organized the group and instructed them to turn their backs to shore and use their tanks for protection against the reef, and then back in toward dry land. They were pummeled against the reef and exhausted but he saw everyone get out safely. He was getting out himself when Kinjo called for help.

“It was pretty clear they were in distress,” said Cranford, who instructed his dive partners to stay out of the water. He went back in by himself.

As he got to Kinjo, the Okinawa City bar owner was in unbridled distress. Kinjo grabbed Cranford’s buoyancy control device and tried to push him under to remain above the water.

“Justin didn’t know what was going on,” Cranford said. “His mental state was starting to decline.”

Cranford subdued Kinjo and turned him around. He put his regulator in his mouth to stop him from swallowing seawater, then dragged him to shore. He returned two more times and repeated the rescue, carrying one person to shore at a time.

An onlooker had ignored warnings not to enter the water and attempted to wade out to help without protective gear. He was sucked out in the rip current and skewered by sea urchins. All he could do was hang onto the reef and wait for Cranford.

Cranford put that man on top of himself to keep him above the water and carried him to shore, where all of the men were hyperventilating, trying to regain their composure.

Timberlake called Cranford a “superb representative” of the Marine Corps.

“I’m sure when friends give Lt. Cranford some time to talk, he’s gonna say, “Hey listen, I only did what anybody else would do,’” Timberlake said during Monday’s award ceremony. “I hear that a lot but that’s not necessarily true. What he did took a hell of a lot of guts and a hell of a lot of courage.”

Cranford said he was honored by the award but shrugged off the praise. He credits the emergency rescue diver course he took at Texas A&M with preparing him to make the rescue and God for placing him in the right place at the right time.

“It’s just a gut reaction,” he said. “You know what to do and you go do it. I didn’t really ever take into consideration whether it was a threat to myself or not … receiving the award really comes down to honoring those who trained me and are still investing in the lives of others.”

Kinjo sees it differently. Both he and his sons see Cranford as a hero, and they plan to return to Camp Schwab to thank him again.

“I owe you my life man,” Kinjo said to Cranford after Monday’s ceremony. “Come out for a drink; I got you.”