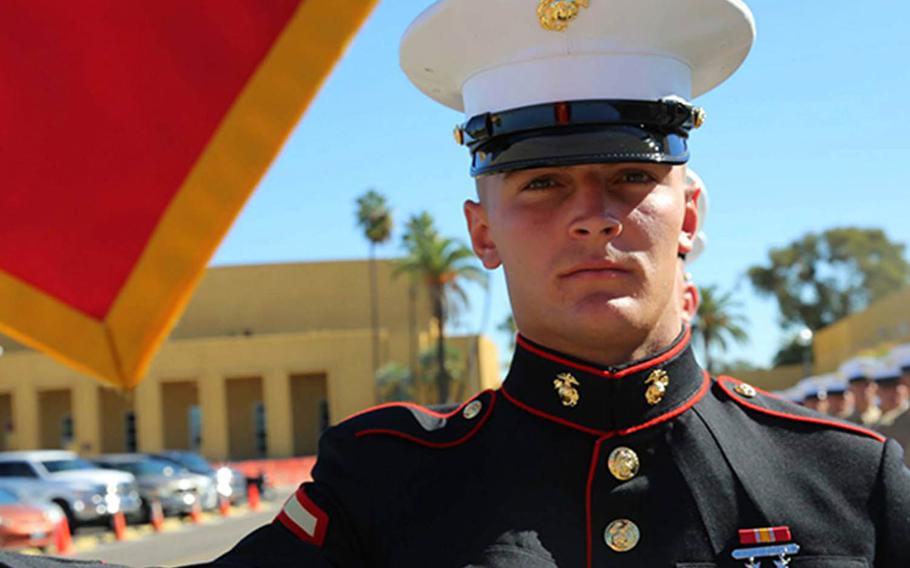 Sgt. Morgan Bergdahl of the III Marine Expeditionary Force faces multiple charges in the April 21 sexual assault of a female Marine who was reportedly too intoxicated to consent, according to his charge sheet. (Facebook)

CAMP FOSTER, Okinawa — A member of the Okinawa-based III Marine Expeditionary Force must answer to multiple charges in the April sexual assault of a female Marine who was reportedly too intoxicated to consent.

Sgt. Morgan Bergdahl, of Combat Logistics Battalion 31, 31st Marine Expeditionary Unit, faces eight charges of sexual assault and abusive sexual contact in the incident, according to a copy of the charge sheet provided to Stars and Stripes.

A court-martial has been tentatively scheduled for Jan. 7. Bergdahl has been held in pretrial confinement on Okinawa since April 25.

The first sexual-assault charge alleges that Bergdahl penetrated the genitalia of the unnamed victim with his penis “on or about” April 21 when she was “incapable of consenting to the sexual act due to impairment” by alcohol.

The charges state that Bergdahl knew, or should have “reasonably” known, that the woman was too intoxicated to consent at the time.

The next charge is for causing bodily harm in the commissioning of the penetrative act.

The next two sexual-assault charges mirror the first two but pertain to oral sex.

The four abusive sexual-contact charges read much like the sexual-assault charges, though they use language such as “touch” instead of penetration.

Bergdahl, who is tentatively scheduled to be arraigned next month, signed on for his current enlistment in August 2014, the charge sheet said. He was nearing the end of his four-year term when the alleged incident took place.