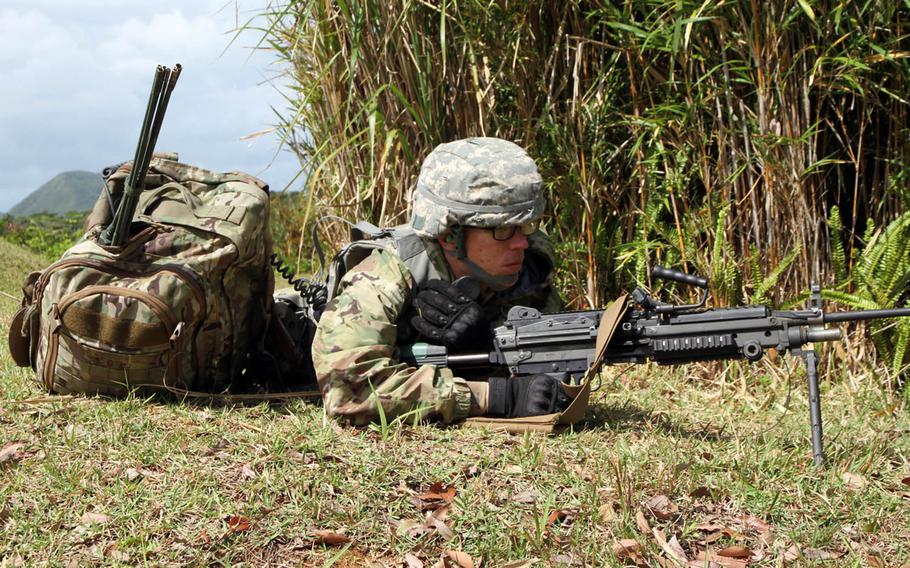 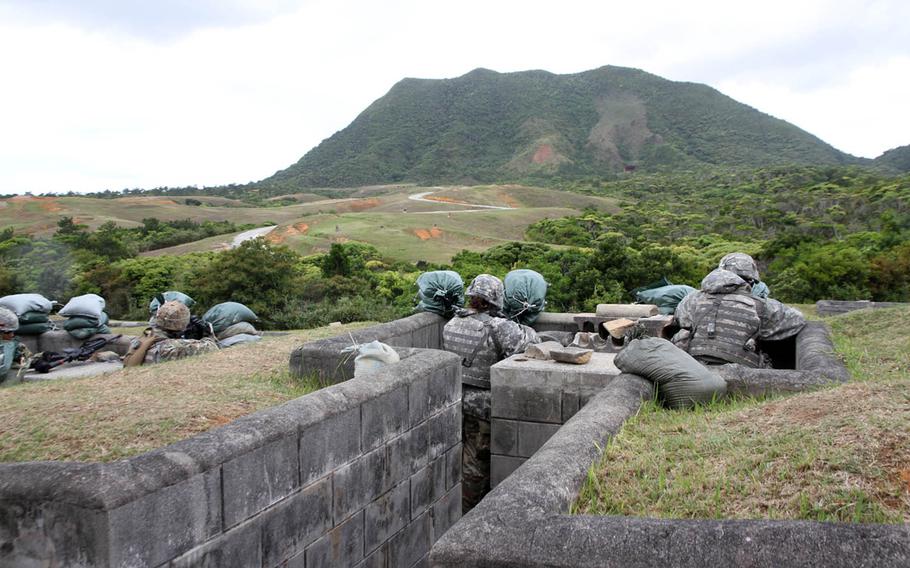 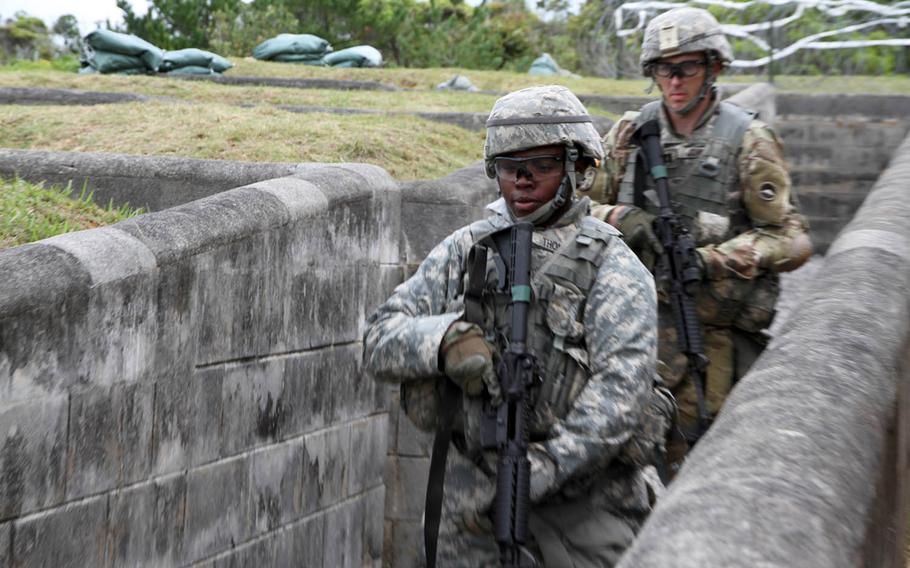 Soldiers from the 10th Regional Support Group shuffle out of fortified trenches during a live-fire exercise on Okinawa, Wednesday, March 21, 2018. (Matt Burke/Stars and Stripes)

CAMP SCHWAB, Okinawa — Even the Army’s cooks and mechanics need to know how to handle an advancing enemy.

Soldiers from Headquarters and Headquarters Company, 10th Regional Support Group recently took to the field at Camp Schwab for the Okinawa-based unit’s first comprehensive live-fire exercise on the island in a decade.

Many of the soldiers are new to the Army or have job duties like paralegal, truck driver and supply specialist that don’t usually involve squeezing the trigger on an M4 rifle.

The day-and-nighttime training was designed to ensure that all are ready for any situation that might pop up in the Pacific.

“It gets us prepared for the worst,” said 10th RSG paralegal specialist Pvt. Daiviah Walker, 22, of South Florida. “Not to say the worst is coming, but just for anything that may happen in the long run. At least we’ll know what to do.”

While such training isn’t new — it takes place yearly on the small-unit level — this was 10th RSG’s largest and most comprehensive effort on Okinawa in years, featuring approximately 100 soldiers, or about 80 percent of the group.

The Army has a relatively small footprint in Japan. Of the approximately 50,000 servicemembers stationed here, only about 2,000 are soldiers. On Okinawa, they are based out of the small coastal base called Torii Station.

Their task was to relieve a unit in a frontline defensive position and engage an attacking enemy, he said. Squad leaders led things off with reconnaissance and put fire support in place, which in this case was Army Special Forces’ mortarmen far from the battlefield. They would then bring their soldiers up to the line.

On Wednesday morning, the soldiers awoke bleary-eyed in the jungle, the result of heavy rains and lightning storms the night before. They picked at Meals Ready to Eat while cleaning their weapons and awaited ammunition and orders.

Once locked and loaded, the first group marched toward its position — a series of fortified trenches atop a hill overlooking a jungle valley with mountains in the distance.

Squad leaders coordinated with Special Forces forward observers and called in the grid before them. Riflemen took their positions.

Targets popped up in the valley but retreated seconds later, signifying enemy ground troops moving forward and hitting the deck. Clouds of dust burst behind the soldiers as they took turns firing.

“You guys were accurate,” said one of the range control observers.

“The soldiers were pumped up; they were ready to get after it,” he said. “They trained really hard to get to this point and this was the culminating event. I give them an A-plus.”

Pvt. Deovian Taylor, 19, a unit supply specialist from Atlanta, said the training was challenging, but she loved it.

“This is not something we do on a daily basis,” she said. “This is my first time coming to the field since I’m new in the Army.”

“The fact that we do have paralegals out here in the same section as a mechanic and a cook, it really shows cohesion, the idea that we’re not just our [military occupational specialty]; we’re all soldiers,” she said.