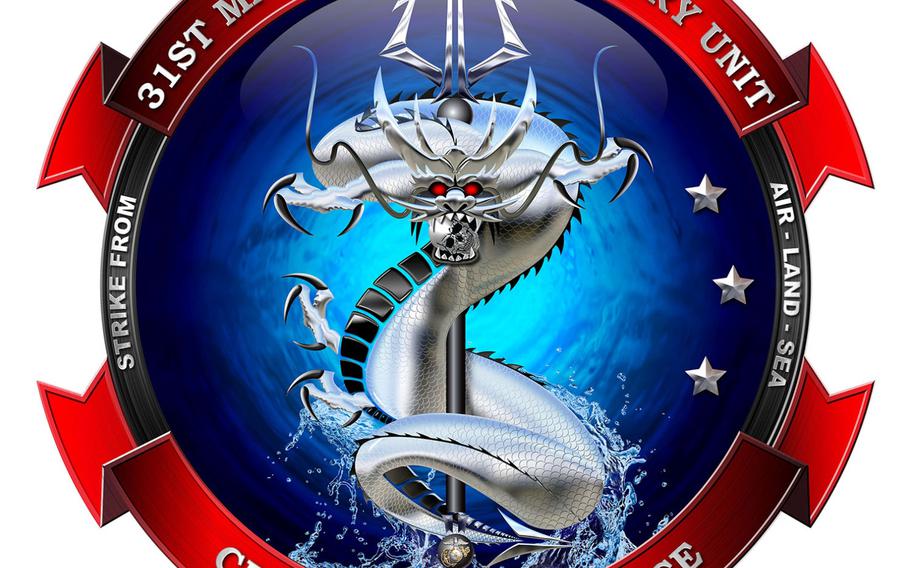 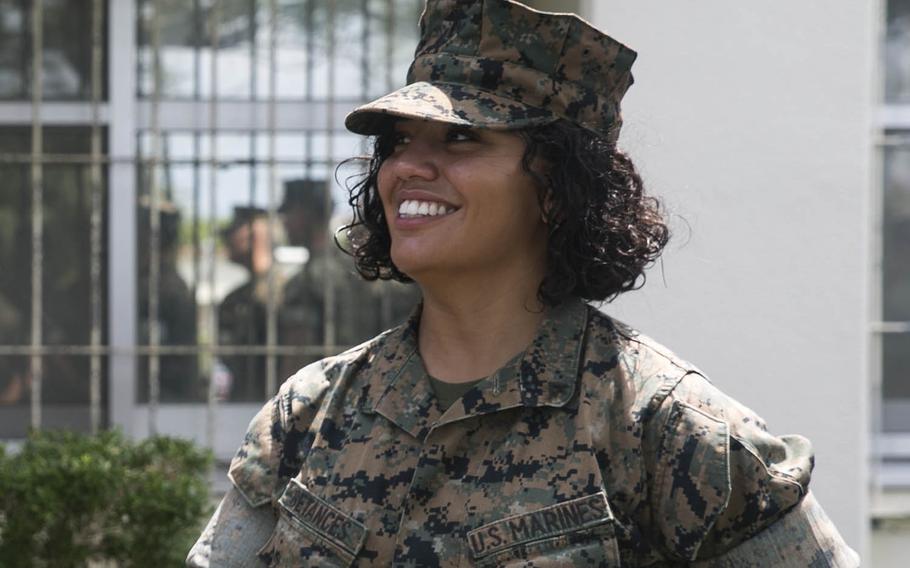 CAMP FOSTER, Okinawa — The 31st Marine Expeditionary Unit unveiled a new insignia Friday to replace its longtime symbol of an eagle and anchor.

The updated logo featuring a fearsome East Asian sea dragon, bursting from the ocean while wrapped around a trident was commissioned at the request of 31st MEU commander Col. Robert Brodie to highlight the unit’s regional partnerships while also stressing the Marine Air-Ground Task Force’s lethality and crisis response.

“We’ve got a lot of positive feedback [about the new logo],” Brodie told Stars and Stripes on Friday, shortly after the logo was unveiled. “It demonstrates what we’re all about. It’s a symbol of strength.”

The dragon symbolizes the Marines’ commitment to its Asian partners, Brodie said.

He commissioned the logo in mid-June, shortly after the F-18 pilot took over the Pacific’s seaborne quick-reaction force from Col. Tye Wallace.

Leadership settled on the design in August, Brodie said. It then went back and forth between ship to shore for about a month while revisions were made and things were added before it was finally unveiled Friday.

“Lance Cpl. Betances forged a symbol that [encapsulates] the themes lethality, strengthened alliances and encouraged new partnerships creating one of the most impressive insignias in the Corps,” Brodie said in a statement Friday. “Her design symbolizes strength and power that instills confidence in our allies and partners while striking fear in our enemy’s hearts. I am exceptionally proud of the Marines who designed our crest and overwhelmed by their creativity.”

While the dragon pays homage to the 31st MEU’s Asian partners, the trident is meant to illustrate the unit’s “amphibious war-fighting nature,” the statement said. The Marine Corps symbol of the eagle, globe and anchor appears at the base of the trident, a nod to the unit’s heritage.

Three stars to the right of the dragon represent III MEF and the 31st MEU motto, “Ready, Partnered, Lethal,” the statement said. A skull in the dragon’s mouth “reinforces Defense Secretary Jim Mattis’ focus on lethality.”

“The crest defines the 31st MEU as a MAGTF ready to strike rapidly from air, land and sea,” the statement said. “It is the type of insignia that pushes Marines to compete for a chance to serve as part of the 50-year old unit.”

Brodie said the new insignia will soon be seen wherever the unit’s insignia is located, whether that is on their headquarters’ sign at Camp Foster, Okinawa, T-shirts or unit coins. The unit also plans to submit the new design to Marine Corps headquarters for archiving as the unit’s primary insignia going forward.