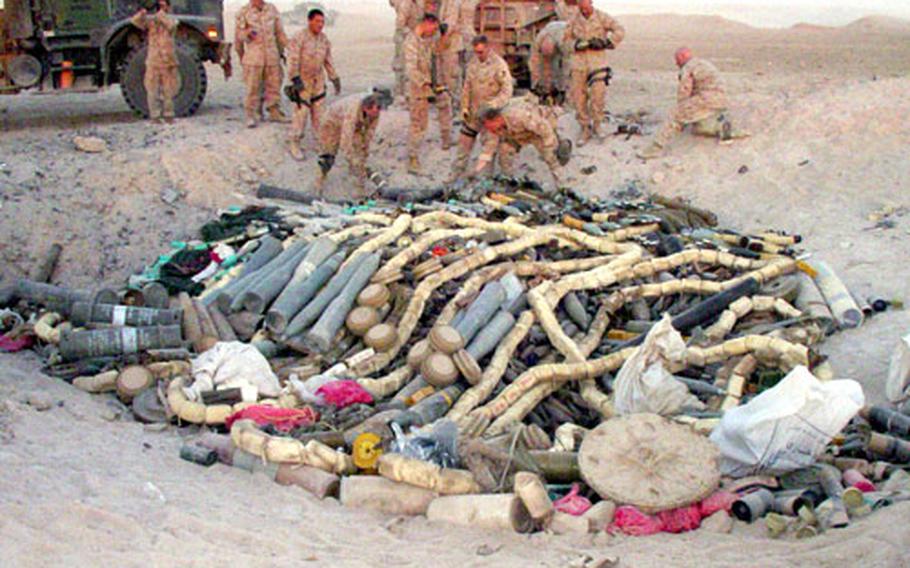 A cache of weapons found in Fallujah, Iraq, is prepared for detonation by Okinawa-based Marines assigned to MEU Service Support Group 31. (Camilo Saavedra / Courtesy of USMC)

CAMP FOSTER, Okinawa &#8212; Marines and sailors with the Okinawa-based 31st Marine Expeditionary Unit have been assigned to remove and destroy the huge weapons caches left behind by insurgents after U.S. forces seized Fallujah in November.

MEU Service Support Group 31, assigned to I Marine Expeditionary Force while in the U.S. Central Command&#8217;s area of operations, was given the task of organizing a weapons cache removal and demolition task force that is collecting the weapons, ordnance and bomb-making materials and transporting them outside the city for demolition, according to a statement released by the Marines&#8217; Consolidated Public Affairs Office on Okinawa.

&#8220;There must have been a sustained effort on the part of the insurgent leadership to build these massive weapons caches,&#8221; said Lt. Col. James A. Vohr, MSSG-31&#8217;s commanding officer.

&#8220;One of the most striking aspects is what must have been the total disregard on the part of the insurgents for the safety of the citizens of Fallujah,&#8221; he said. &#8220;Had any one of these caches detonated in town it would have leveled city blocks.&#8221;

Most of the city&#8217;s 250,000 civilian residents fled before the Nov. 8 assault by coalition forces in a final push to drive the insurgents from the city.

One huge storehouse for such weapons, which included automatic rifles, rocket-propelled grenades, explosives and suicide vests, was found in a city mosque, a Marine intelligence officer told reporters.

&#8220;The amount of weapons was in no way just to protect a city,&#8221; Maj. Jim West, a Marine intelligence officer, told reporters.

&#8220;The Marines and sailors work with a purpose and feel good about what they are doing because they know they are making a difference,&#8221; Vohr said, according to the Marine press release.

&#8220;The task of removing the numerous weapons caches is a painstaking process that is collected in a deliberate, methodical manner and results in the daily reduction of what was left of the Fallujah insurgents&#8217; weapons and munitions inventory,&#8221; the release stated.

&#8220;This action by the Marines and sailors of the task force is one step of a multipurpose process that will ensure the city is safe when civilians eventually return.&#8221;