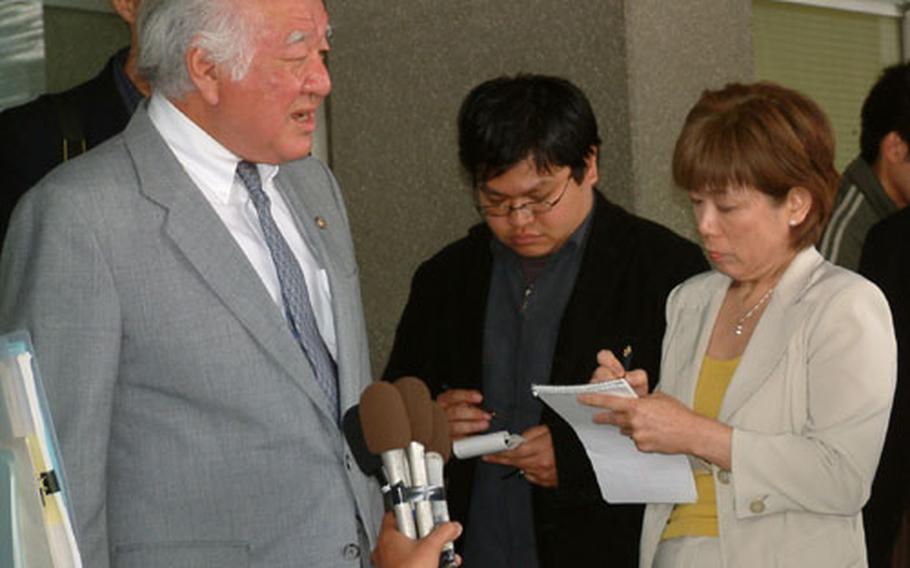 Maj. Michael Brown, 40, made no plea to his indictments on attempted rape and destruction of private property stemming from a Nov. 2 incident in Gushikawa, just outside Camp Courtney.

If the judges rule against the dismissal motion, the next court session takes place April 17.

Brown, assigned to the 3rd Marine Expeditionary Force&#8217;s command element, is accused of attempting to rape an employee of the camp&#8217;s officers club after she offered him a ride to his off-base home following a night of drinking with other officers at the establishment. She also says he destroyed her cellular phone by throwing it into a stream when she tried to call police, according to authorities.

Brown has denied the assault charge, police said, claiming the woman was upset he&#8217;d rebuffed her sexual advances in the car. He told police he threw the phone away in frustration when she grabbed his wallet and refused to return it, they said.

Brown, wearing a dark suit with a red tie, shuffled into the packed court handcuffed and tethered to two guards with a rope around his waist. Beneath the suit&#8217;s neatly pressed pants, he wore a pair of brown, prison-issue, plastic slippers.

After the cuffs were removed, he sat between the guards on a bench in front of the defense table, while Takaesu lambasted Okinawa police and the prosecutor&#8217;s office for proceeding with a case he claimed had little merit.

He argued that Brown was charged because he is a U.S. serviceman, pointing out that in the same time period, charges were not pursued against the Okinawan son of a Japanese mobster accused of raping a Marine&#8217;s wife.

He said he was unfazed by revelations in local newspapers Thursday morning that Okinawa police had matched DNA taken from saliva on the woman&#8217;s upper body with DNA in a blood sample obtained from Brown during the investigation.

The papers cited unnamed sources. Official police sources would not comment on the report.

&#8220;The DNA is not key evidence,&#8221; Takaesu said during a press conference outside the courthouse. &#8220;We intend to fight to demonstrate that he was illegally charged. It is inappropriate for the prosecutor to make leaks to the newspapers about the DNA.&#8221;

Griffith sat with Brown&#8217;s mother and wife during the two-hour hearing. Of the 43 seats in the public section, 17 were reserved for reporters and three for Brown&#8217;s family and Griffith. Tickets for the remaining 23 seats were issued to the public during a lottery in front of the courthouse just before the hearing. More than 125 people vied for the open seats.

Throughout the hearing, Brown took notes on a yellow legal pad, occasionally looking up to smile at his wife and his mother.

He has been in the Naha Detention Center since his Dec. 19 indictment. Before that, he was restricted to Camp Courtney for a month during the police investigation.

Just prior to the start of Thursday&#8217;s hearing, Brown suffered a setback with news from the United States that a federal judge in Washington had dismissed his motion to have jurisdiction of the case given to the U.S. military.

Brown&#8217;s lawyers argued that the U.S. military violated Brown&#8217;s civil rights by surrendering jurisdiction and subjecting him to the Japanese criminal justice system.