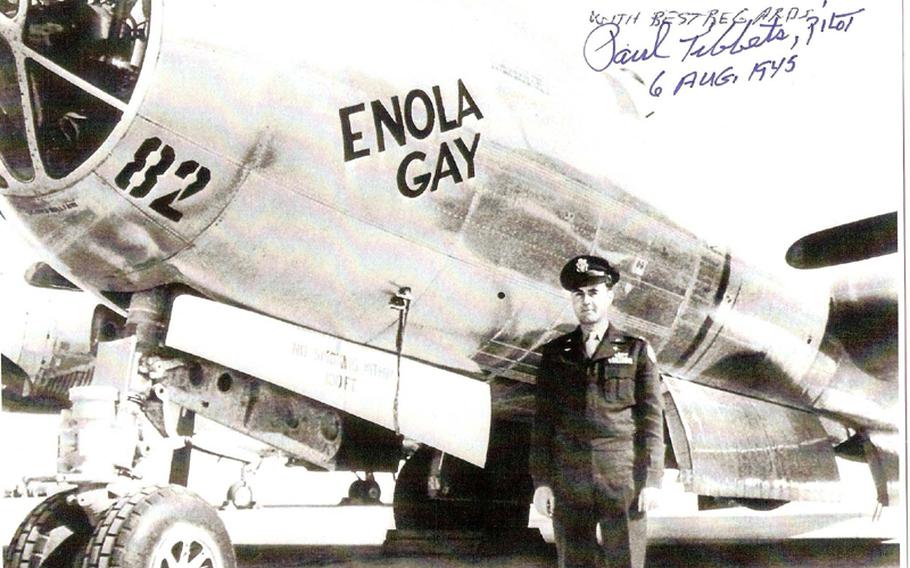 A signed photo of Brig. Gen. Paul Tibbets and the Enola Gay, the plane he piloted during the atomic bombing of Hiroshima. (Courtesy of Kyle Nappi)

A signed photo of Brig. Gen. Paul Tibbets and the Enola Gay, the plane he piloted during the atomic bombing of Hiroshima. (Courtesy of Kyle Nappi) 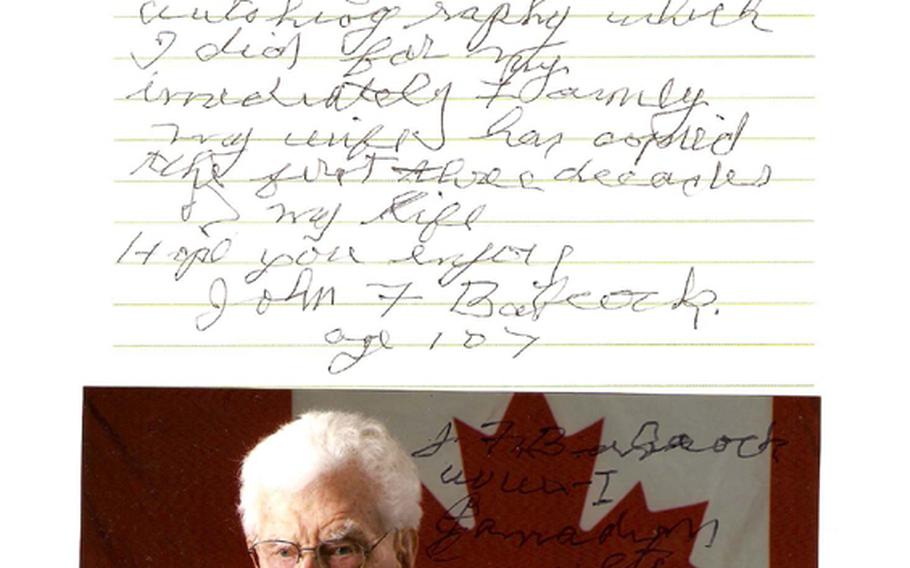 John Babcock was Canada&#39;s last surviving World War I veteran before he died in Fedruary. He wrote this letter to Nappi in 2007. (Courtesy of Kyle Nappi) 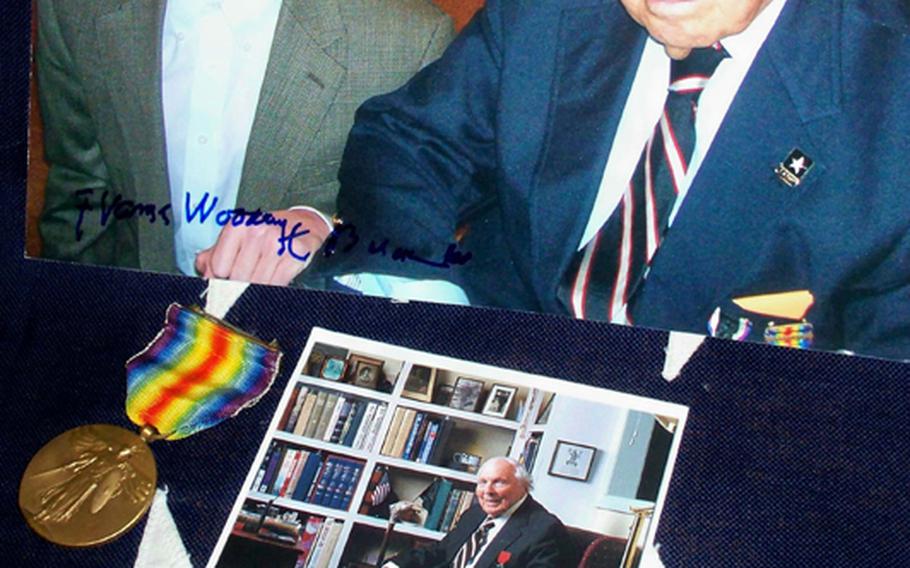 Nappi meets with Frank Buckles, the last known American World War I veteran, in 2008 during a ceremony at the Pentagon. (Courtesy of Kyle Nappi) 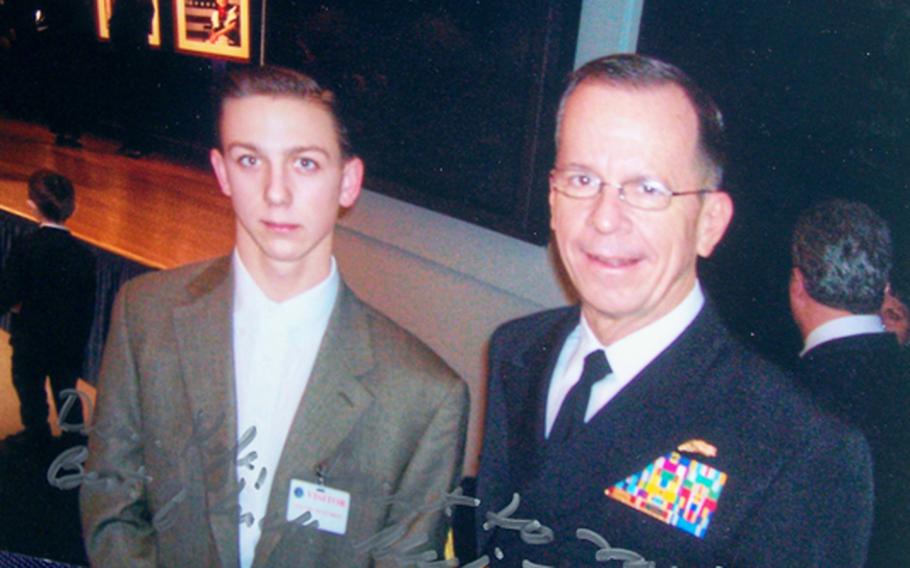 Adm. Mike Mullen, the chairman of the Joint Chiefs of Staff, gave Nappi his coin and posed for a photo. (Courtesy of Kyle Nappi) 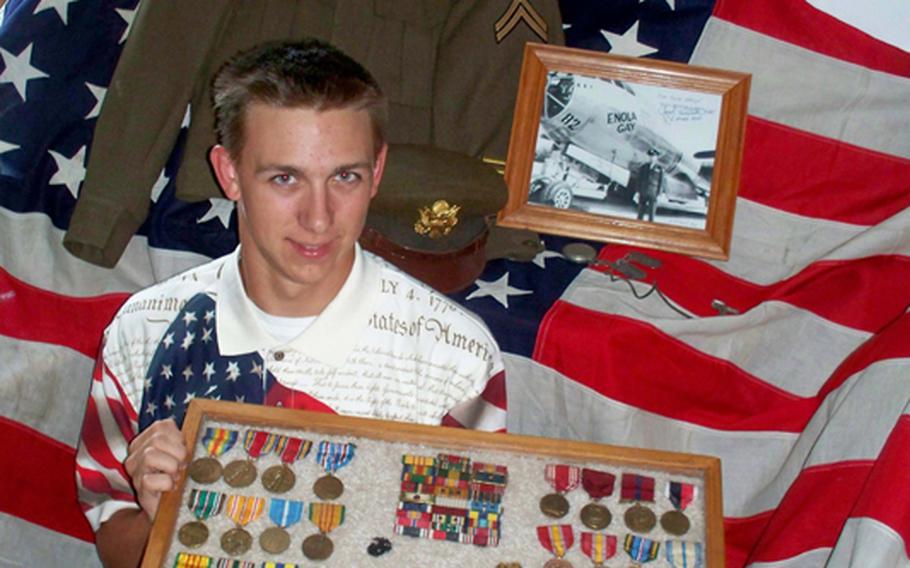 Kyle Nappi, 20, keeps his collection of autographs and memorabilia in frames and fire-resistant safes at his home in Ohio. (Courtesy of Kyle Nappi) Huston Riley was a rifleman with the first wave of American forces that stormed Omaha Beach, a deadly offensive that eventually led to the end of World War II. Riley signed copies of photos taken during the mission by Frank Capra. (Courtesy of Kyle Nappi) 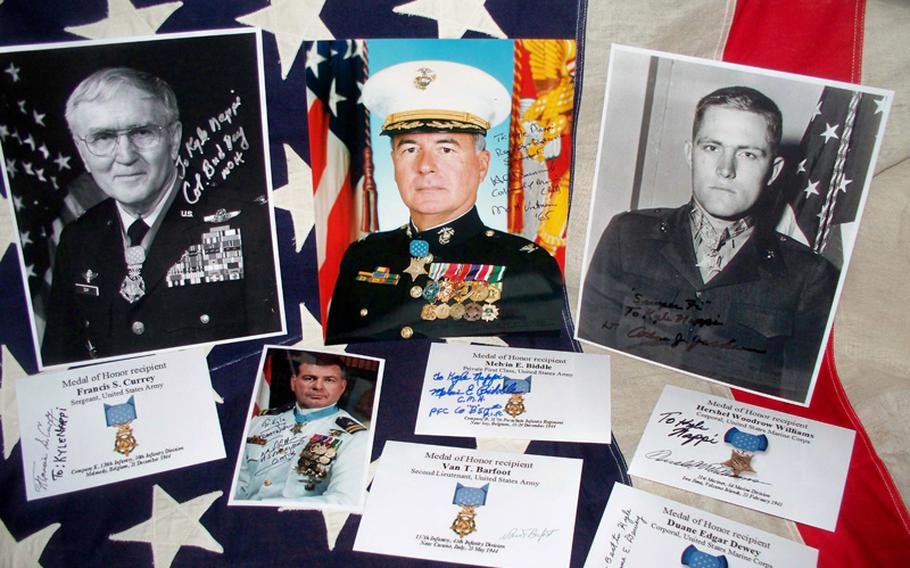 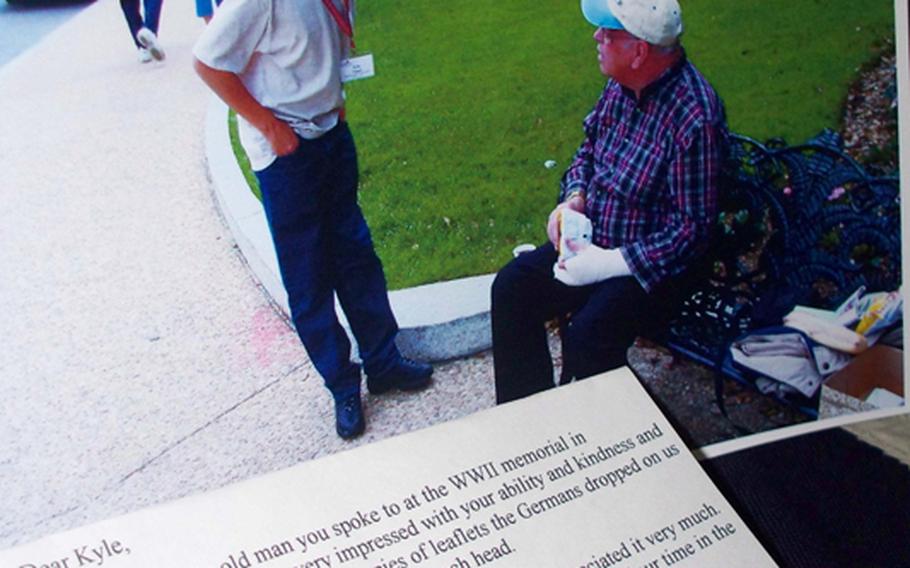 Nappi said he received this letter from a World War II veteran he met during his school's 8th Grade field trip to Washington, D.C. (Courtesy of Kyle Nappi) This Soviet military memorabilia from World War II includes an autograph by a female sniper and a written message from Gen. Valentin Varennikov, a World War II veteran, the commander of Soviet forces during that country's war in Afghanistan and part of a group who planned a failed coup during the fall of the Soviet Union in 1991. The message reads: ''To Kyle Nappi, Citizen of the USA, For a good memory and best wishes, Hero of the Soviet Union, Army General Varennikov, July 2008.'' Varennikov died in May 2009. (Courtesy of Kyle Nappi)

The identity of the iconic ''kissing sailor'' photographed in Times Square celebrating the victory over Japan in World War II remains uncertain. But George Mendonsa, of Newport, R.I., is a leading candidate, according to recent analyses. Mendonsa responded to Nappi's request by mailing autographs. (Courtesy of Kyle Nappi) 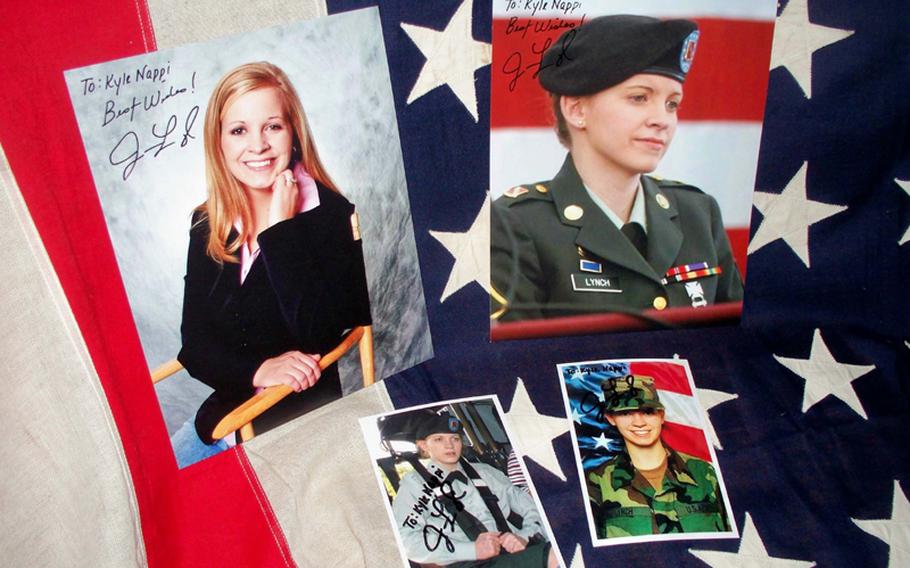 Famed prisoner of war Jessica Lynch, who was captured during the U.S. invasion of Iraq in 2003. (Courtesy of Kyle Nappi) Gen. Hal Moore commanded forces during the battle of La Drang Valley in 1965, the first major fighting of the Vietnam War. He co-wrote the book ''We Were Soldiers Once ... And Young,'' about the battle, which inspired a movie starring Mel Gibson as Moore. (Courtesy of Kyle Nappi) 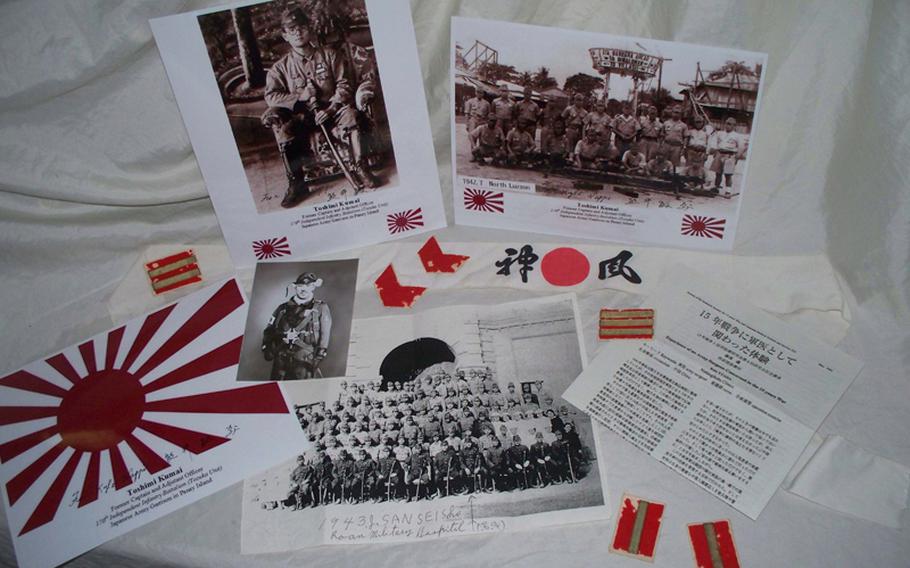 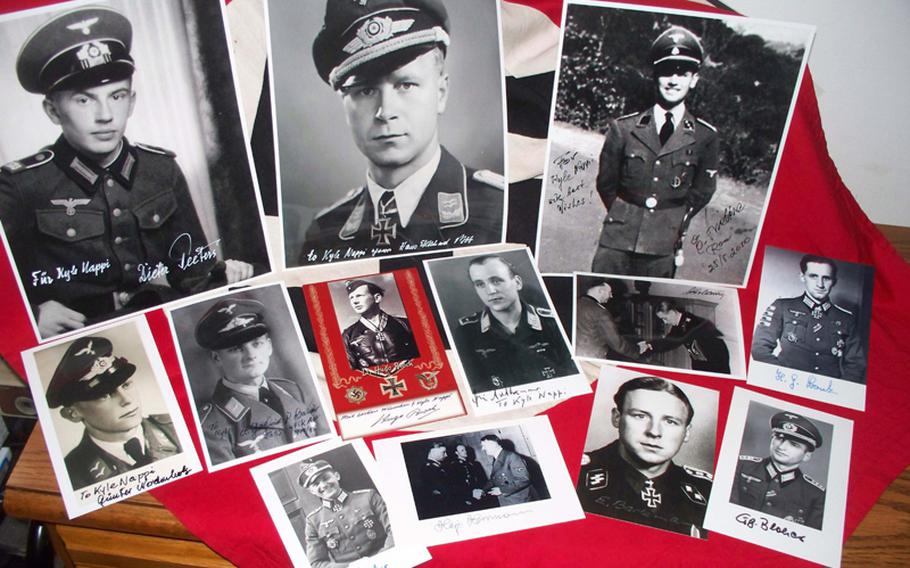 If you meet Kyle Nappi, the first question you might hear is: &ldquo;Are you or is anyone in your family a veteran?&rdquo;

The 20-year-old Ohio State student has been asking that question a lot for nearly a decade. So far, Nappi said about 4,000 people have answered.

Each veteran has given Nappi at least an autograph &mdash; sometimes much more &mdash; for the collection of military history and memorabilia stacking up in fireproof safes and shelves in the bedroom of his home in Ostrander, Ohio.

The collection includes some of the most celebrated. Brig. Gen. Paul Tibbets, the pilot of the Enola Gay, and Frank Buckles, who at 109 years old is the last living American veteran of World War I, provided autographs.

There are posters and signatures of Medal of Honor recipients and active-duty heavyweights like Chairman of the Joint Chiefs of Staff Adm. Mike Mullen.

&ldquo;The patriotism and the pride that they all had. It just shouldn&rsquo;t be forgotten,&rdquo; he said. &ldquo;My whole thing is just trying to remember those stories and trying to keep those legacies alive.&rdquo;

But the collection also includes the unsung and the notorious.

An American flag given by the widow of a World War II bomber pilot killed during a training mission is kept in a glass case.

The feared Nazi SS panzer commander Ernst Barkmann sent signed photos &mdash; including one of him standing in the turret of a tank &mdash; from his home in Germany.

About a dozen other German World War II veterans and some Japanese veterans trained as kamikaze pilots have also contributed pieces to the collection, Nappi said.

Many of the veterans responded after they were contacted through the mail, he said.

&ldquo;Usually, I ask if they have any wartime photos of themselves in uniform,&rdquo; Nappi said.

When the autographs, letters and photos come in, each is stored in the original envelope and kept in the bedroom safes or on shelves.

Nappi said he started collecting autographs from Ohio veterans after being inspired by the movie &ldquo;Pearl Harbor&rdquo; in 2001. His very first autograph came from a local World War II veteran who was captured by Germans at Anzio during the allied invasion of Italy in 1944.

That autograph led Nappi to approach strangers on the street in search of veterans. In March 2008, he attended a ceremony at the Pentagon for Buckles and other veterans.

&ldquo;If it&rsquo;s a really notable person, I&rsquo;ll do a whole detective-type thing,&rdquo; he said. &ldquo;I&rsquo;ll find the town that they live in and see if I can search their residence in the town. If I can&rsquo;t do that, I&rsquo;ll e-mail administrators or city workers in the town from their Web site.&rdquo;

He hopes that method can lead him to veterans such as Tsuruji Akikusa, a Japanese World War II veteran who fought and survived the battle for Iwo Jima and now lives in central Japan.

Nappi &mdash; who said he doesn&rsquo;t plan to join the military &mdash; just completed his freshman year at Ohio State and is considering majoring in history or journalism. Either path would help him take his collection to the next level.

&ldquo;I&rsquo;d like to sometime publish a book about what I&rsquo;ve done since age 12, which is try to raise awareness about these vets,&rdquo; he said.